Kris’ note: It feels as if we’ve been on a lonely mission. The financial newspapers, TV channels, and websites have been full of scary stories. The ongoing COVID-19 coverage… the potential collapse of a Chinese property developer… and the “fear” of another government shutdown due to debt ceiling issues.

It’s no surprise that stocks looked pretty bad at the start of last week. Yet, by the end of the week, the market had gained back all of that week’s losses. We can only imagine how many folks the mainstream scared into selling stocks, when it really wasn’t necessary at all.

That’s why we wanted to share an excellent essay from the folks at Palm Beach Daily. Investment analyst Grant Wasylik has uncovered a strategy that has proven time and again to help investors deal with extreme market volatility over the long term… To the extent that it has outperformed the market by 12x over a 21-year timeframe. Extraordinary.

What’s more, Grant has details on a special opportunity that could take those returns and multiply them even further. We’re always on the lookout for great ways to help our readers make money. This could be one of the best we’ve seen yet. Read on for details…

Over the last week or so we’ve seen market volatility (as measured by the CBOE Volatility Index, or VIX) go from a reading of just under 19 to as high as 28.5 in a matter of days…

When the VIX is under 20, it’s a general indication of a “stress-free”, stable market. Investors are calm, confident, and looking to buy or hold stocks on the rise.

But when the VIX kicks above 20, investor confidence has waned and selling has picked up. And when the VIX breaks above 30, the market is considered to be highly volatile.

When investor fear is high, riskier investments are often sold off in an attempt to play defense against future uncertainty… so when the VIX came within reach of 30 last Monday, many investors panicked.

Most people can’t stomach that type of volatility. They usually buy stocks at the top on FOMO (fear of missing out)… and sell at the bottom on FUD (fear, uncertainty, and doubt)…

That’s a recipe for losing money and sleep, like in last week’s market.

And maybe a little extra FUD was baked into last week since we’ve had a historically calm year in 2021. For example, the S&P 500 has posted a positive return for the last seven straight months. And it has done so with bond-like volatility.

Now, I understand why some investors might be a little fearful today…

The COVID pandemic is dragging on… inflation is on the rise… China’s largest real estate group is on the verge of bankruptcy… and Congress is debating whether to raise the debt ceiling.

Any of these issues could send stocks tumbling.

Or that there are stocks that don’t drop more than 10% in bad years (or any year for that matter)… And that return over 12x the market over the long term.

A strategy like that would insulate your portfolio from events like a pandemic, inflation, economic meltdown, or sudden volatility… and make you double-digit gains when the market rebounds.

You wouldn’t fall victim to FOMO or FUD, and you’d be able to sleep at night.

Today, I’ll tell you what that strategy is – and how you can profit from it.

At Palm Beach Research Group, we call it the “Untouchables” strategy, and there are two reasons why…

First, whether the VIX is at 13 or 30… you’ll never want to touch these stocks in your portfolio. And second, nothing can touch their performance.

Not only do our Untouchable stocks outperform the market over the long term, but they’re also unaffected by extreme drops like the ones we saw when the market ended the year down 37% in 2008 and 22% in 2002.

To find these exceptional stocks, we studied the two major bear markets over the last two decades…

And we combed through 19,000-plus publicly traded stocks in North America using multiple data subscriptions that cost over $50,000 per year combined.

What was the goal? To spot stocks that won’t suffer during significant drawdowns in the market while also easily outperforming over the long term.

In the end, only 13 stocks made the cut.

Take a look at how our strategy performed:

But what about making money over the long run?

As you can see below, the Untouchables not only outperformed the market… they also outperformed investing legends like Warren Buffett, Carl Icahn, and Prem Watsa. 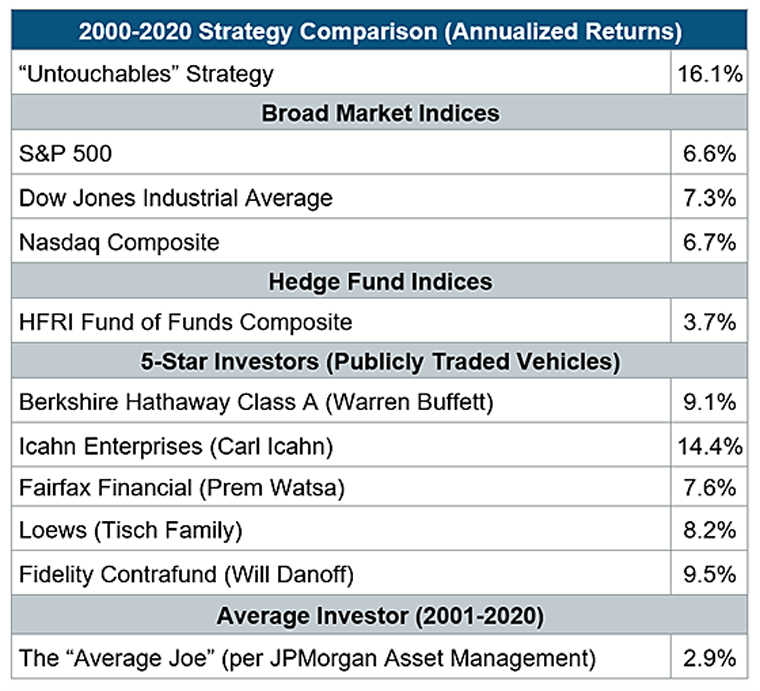 That’s why you’ll never want to touch these stocks.

Bulletproof Your Portfolio With the Untouchables

Over the past year, we’ve seen how a pandemic crisis and rising inflation can roil the markets…

So there’s no better time to bulletproof your portfolio with Untouchables.

If you want to find Untouchable stocks yourself, they share five key traits:

One example of an Untouchable is Johnson & Johnson (JNJ).

And as an Untouchable, the company has a history of outperforming when the broader market falls…

If history is any guide, Untouchables like JNJ are the types of stocks that’ll do well, no matter where the market is headed… even during the kind of volatility we’ve seen last week.

To sleep better at night, make sure you bulletproof your portfolio with Untouchables. They’ll profit in the good times… and protect you in the bad.

P.S. There is another investment strategy that has even less volatility than the Untouchables, with considerably more upside. I’m talking about private equity – or pre-IPOs.

An IPO – or initial public offering – is when a company lists on an exchange like NYSE or Nasdaq. So a pre-IPO is a company that’s still private.

And now, you have a chance to get in on one of these deals…

Teeka just announced his newest urgent buy alert – a chance for you to get in on a pre-IPO deal with a billionaire.

Teeka will reveal how on Wednesday, October 6, at 8 p.m. ET. Click here for details.

The last time Teeka made a pre-IPO recommendation at an event like this, it filled up in just 12 hours. And Teeka believes this deal could go even quicker. So RSVP now.