Even in the age of massive crypto gains, that type of win is life-changing.

And believe it or not… even before crypto, you could make profits of this magnitude.

I’ll show you how investors who followed the right trends booked over 1,000x gains (even before bitcoin).

And how we can position ourselves for similar gains today.

I’m Konstantin Ogurchenkov, and I’ve been a Casey Research analyst since 2015. I’ve worked under great newsletter editors and investors like Louis James, Doug Casey, and for the past several years, Dave Forest and John Pangere. (In fact, Dave and I are neighbors.)

I’ve learned a lot from them. And now, I want to share some of what I’ve picked up from the greats with you…

Back in 2003, a tiny energy subsector was silent… unloved… and boring. It produced uranium to feed nuclear reactors across the globe.

Prices of nuclear fuel were wobbling from $10 to $15 per pound for over 15 years. Barely enough to keep the lights on…

No one cared about this energy source until late 2003, when the price of uranium started rising. By mid-2007, it reached $136 per pound.

But that was the price of physical uranium. I doubt that an average investor would buy nuclear fuel for investment.

Folks like you and I can bet on a much better investment tool. One that returned over 100,000% in the same time frame.

And that’s uranium miners. They produce uranium and sell it to power plants.

As the price of the underlying metal soared 1,240%, uranium miners did even better. 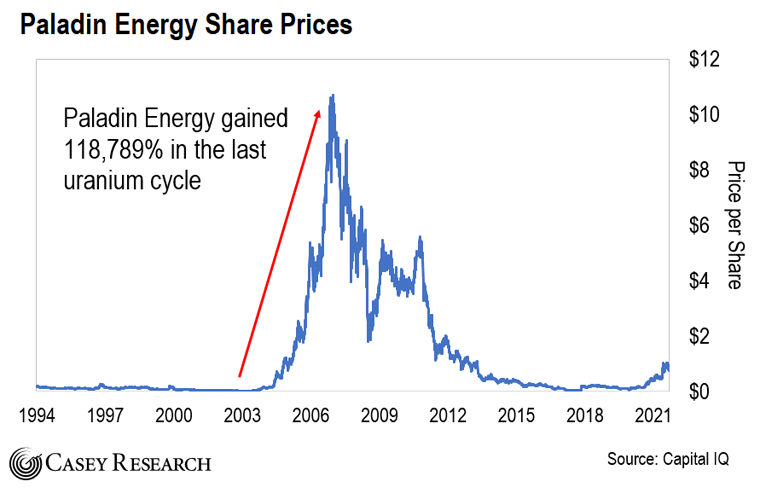 Actually, our very own founder, Doug Casey, recommended Paladin Energy in his newsletter in 1998 – and as you can see in the chart above, it skyrocketed just a few years later.

Even half of this gain can be life-changing.

Aside from our founder, big investors like Sprott, which manages over $12 billion across four metal funds, also made good profits back then.

And now Sprott is getting ready for another round of gains…

In early 2021, Sprott bought a company called Uranium Participation. It was buying and holding physical uranium for investment purposes, acting like a physically-backed fund with a public listing.

It was a simple business that had small overhead and clear value on the market. It could be measured by the amount of uranium held. So it was a direct link to uranium’s prices.

For a while, it was a small business with a $0.6 billion market capitalization. But Sprott had bigger plans for it.

Once acquired, the new entity was called Sprott Physical Uranium Trust (U.U.TO). It announced plans to raise $0.3 billion to keep buying uranium from the open market.

In November, on the back of strong investor demand, this amount was pushed to $3.5 billion. In the next 25 months, Sprott Uranium Trust most likely will put this money into nuclear fuel.

At the current price of $43 per pound of U3O8 (uranium oxide), Sprott can buy over 81 million pounds of uranium.

At the same time, the global annual uranium demand is estimated at 178 million pounds. So Sprott can cause a big shortage on the market, and push prices higher.

Moreover, uranium (contrary to what many believe) is one of the cleanest energy sources. Its power-generating emission stands next to wind and hydropower. It emits 68 times less carbon than coal per kilowatt hour (kWh). 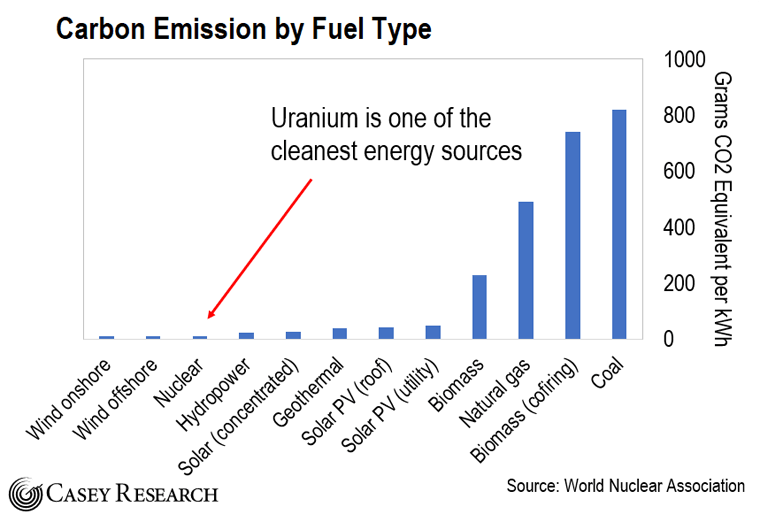 It’s a clean and highly-efficient source of power. It’s a good fit into the new clean energy paradigm – a money-making trend which my colleague Andrey Dashkov has been covering for nearly two years now.

The price of uranium is up 40% in the last year. And I believe with $3.5 billion coming into the sector, prices will keep rising.

Our Way to Profit

First, we can go with Sprott Physical Uranium Trust (U.U.TO). It tracks the prices of uranium and acts as a simple paper investment. A great tool for low-risk investors.

However, to position yourself for larger gains, we prefer custom-picked stocks. These are high-reward picks… but also carry higher risk.

Yet, as I showed above, these stocks were responsible for life-changing gains of over 100,000% in the past…

And my mentor, Dave Forest, and I believe these gains are just around the corner once again. The uranium market is cyclical… and he has several picks in his International Speculator advisory to play this trend. These range from early-stage explorers to major uranium miners.

They’re already up 81% on average in the last year alone. It’s a double versus the price of uranium.

And I believe it’s only the beginning of the big trend ahead of us.

P.S. If you want to dial in on these kinds of explosive gains… be sure to check out Dave’s briefing on the crisis in tech metals. There are a lot of 1,000%+ gains to be made in this space.