Editor’s note: At Casey Research, we’ve always advised readers to hold gold for the long term. Especially during times of uncertainty, the precious metal continues to protect your wealth – holding up against extreme volatility like we’re seeing today.

But if you’re a regular Dispatch reader, you likely already own gold. And if you’re looking for another way to strengthen your portfolio, our colleague, Tom Dyson, shared another opportunity that few investors know about… and it could turn a small stake into 10x returns.

Tom’s so confident in this idea, he bet nearly his entire net worth on the trade. Go here to learn exactly how to get in – it could be your biggest money-maker for the next 20 years.

A lot of smart people have bought gold.

Now, gold is up 63% from its lows in 2015. If you haven’t bought gold yet (and you’re a cheapskate like me), you may be worried you’ve missed the boat. But it’s not too late. This is what you have to do… (More below.)

Last week, we left Kate’s parents’ house with our kids, our suitcase, an old battered pop-up camper designed to sleep three, and a plan to drive to Alaska.

First, we stopped in Port St. Lucie. We spent two nights in a state campground on the edge of a beautiful swamp. Kate and the kids did their schoolwork in the morning while I did my writing work. In the afternoon, the kids threw rocks into the swamp and played hide-and-seek among the live oaks with a local boy, Brock. We saw two alligators.

Then we drove 200 miles northwest. I found a new camp on an app that’s similar to Airbnb, except it’s for connecting campers with landowners. (The app’s called Hipcamp.)

I chose another place next to a swamp called Camp Outlaw, in rural Florida somewhere west of Orlando. We paid $20 a night to boondock.

The description said Camp Outlaw was a campground. But I imagine most of the campers there were long-term residents, so I’d describe it more as a trailer park.

We found the roads in Central Florida to be full of traffic. The economy appears to be functioning normally (from what we could tell).

Camp Outlaw was busy, too. There were RVs and trailers parked all over the property. Big pickup trucks with throaty engines came and went every few minutes. 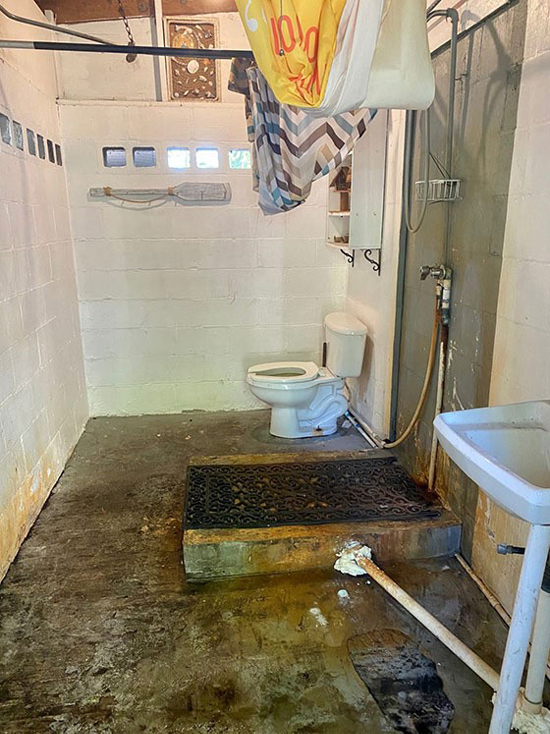 Our bathroom at Camp Outlaw

And here we are having dinner at the community picnic table with some other campers we met a few minutes earlier. The little girl is Shilo, and her mom is Sage… 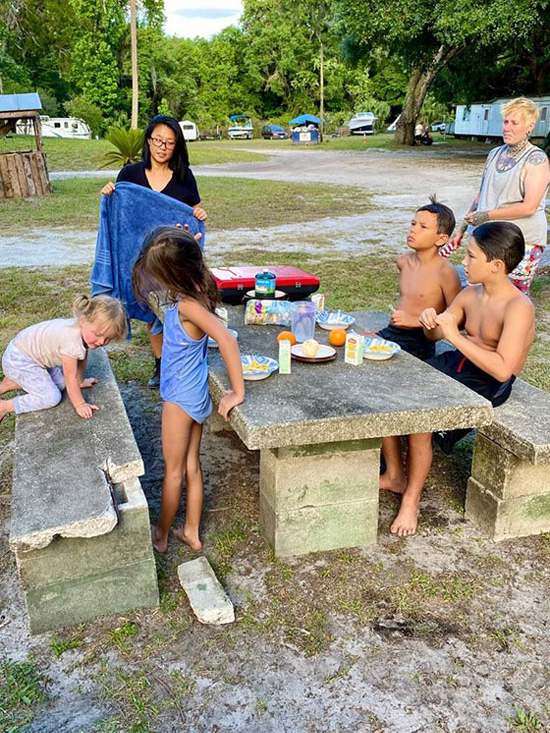 Hanging out with Shilo and Sage

I’m writing this message to you now from my bed in our pop-up. Kate and the kids are sleeping next to me and we’re being serenaded by frogs, crickets, and all sorts of other swamp noisemakers…

Back to gold… I’ve been promoting a simple exchange: Sell stocks, buy gold.

Now, keep in mind that we’re not buying gold as an investment. We’re simply lightening up on passive stock market investments like ETFs, robo-index funds, mutual funds, stock ETFs, and buy-and-hold stock market strategies… and moving to the sidelines (in gold) until stocks get cheap enough for us to buy them again.

In other words, we are using gold primarily as money – a safe haven – and not as a speculation on higher gold prices.

This is why I’ve put the bulk of my money into physical gold. It’s a way to keep us safe while the investment markets correct.

This chart shows what I’m talking about. It shows stocks (specifically the Dow) priced in gold. 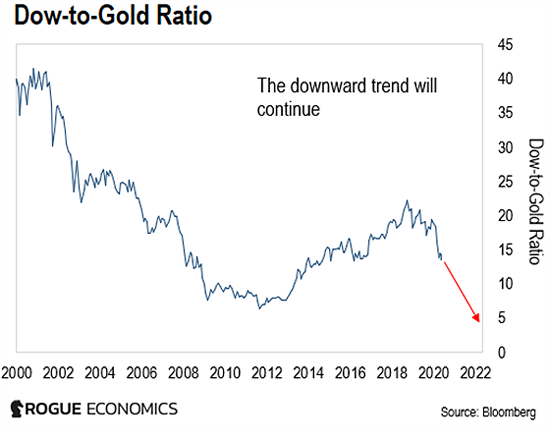 As you can see, the primary trend in the stock market has been DOWN since October 2018, when it peaked at around 22. It’s currently around 14. And it’s on its way to below 5.

By owning gold, we set ourselves up to buy stocks at some point in the next five to 10 years at much lower valuations than they are today. And as such, the only thing that matters is how gold performs relative to stocks. Its nominal price of $1,700 – or whatever it is today – is irrelevant.

So if you’re worried that you’ve missed the boat, keep in mind this trend still has a long way to go. And if the daily moves in the markets are keeping you up at night, remember what I’ve said before: Focus on the process, not the results.

P.S. Like I mentioned above, I have the bulk of my portfolio in physical gold. But my strategy does involve other plays, in smaller amounts. All in all, I’ve invested nearly $1 million in this strategy. And it’s not too late for you to get on the right side of the trend, too.

Last Wednesday, I showed you why this could be the most important decision you make with your money over the next 10 to 20 years. If you missed my special briefing, don’t worry. You can watch the replay here.