One of the world’s biggest food commodities is about to enter a Super Spike.

Super Spikes are periods when commodities explode upward. They create some of the biggest and quickest gains anywhere in the markets.

And now, the signs are flashing for an unfolding Super Spike. The key is finding the right investments.

Today, I’ll uncover not one, but two assets to profit from…

Super Spikes Have a Predictable Pattern

I developed the Super Spike model from my two decades of work in the commodities business. I’ve focused on ways to track and capture the biggest gains during these unique periods.

But I’m not the only one who’s noticed Super Spikes. Some of the biggest global agencies recently began reporting on coming spikes in hard assets.

The International Monetary Fund (IMF), for example, recently said that energy metals like lithium, nickel, and cobalt would reach historical highs “for an unprecedented, sustained period.”

To find out which commodity is next, we need to look at the whole universe of hard assets. A key part of the Super Spike model is that many hard assets spike at once. We get a “rolling boil” where spikes spread from one sector to another.

That’s what makes Super Spikes so profitable. We don’t just get booms in one thing. We get numerous chances for triple- or quadruple-digit gains in everything from tech metals to energy to agricultural goods.

So there’s a predictable order to the spikes in different hard assets. It’s complex, but if we understand the connections between commodities, we can figure out the next ones likely to spike.

That’s a big development. India is the world’s second-largest wheat producer. It’s a key supplier to nations from Asia to Africa to the Americas.

There are a few reasons behind India’s export ban.

Oil and gas prices have been skyrocketing lately. WTI crude enjoyed the beginnings of a Super Spike this past year, rising from $65 to over $115 per barrel.

This is how Super Spikes get contagious. A spike in one commodity triggers a rise in other, seemingly unrelated hard assets.

There’s more to it. Rising energy prices also jack up costs for fertilizer. Natural gas is a key fertilizer ingredient – and that fuel has grown very expensive in many parts of the world, spurred by oil prices.

So we have three different commodities spiking one after another: oil and gas, fertilizer, and agricultural products like wheat.

Marine Fuel Oil Is Going Up

But the connections run even deeper.

If you’re not in the shipping business, you probably never think about marine fuel. It’s a special blend of petroleum that runs boats, including the world’s largest cargo ships.

The last couple years, there’s been an increase in fuel oil prices for ships. 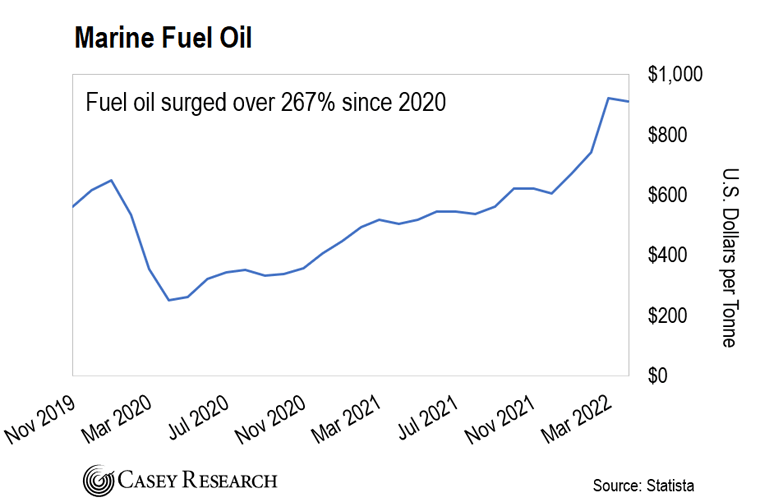 The chart above shows how the marine fuel spike has accelerated lately. Since December 2021, for example, its price surged over 50%.

That hike also drives wheat prices higher. Expensive marine fuel makes it more costly to ship wheat around the world. Especially on some of the long-distance hauls that run out of India.

That’s how Super Spikes get really big. After one or two commodities spike, the whole commodities sector goes ballistic.

It’s happened reliably throughout history: the 1910s, the 1950s, the 1970s, and the 2000s. When these Super Spikes hit, hard asset investors made hundreds, even thousands of percent gains.

Now, the time is here again.

Today, I released a blueprint for profiting from the current Super Spike. It’s got all the background on what Super Spikes are, why they happen, and the absolute best ways to profit from them.

I’ve also got a brand-new Super Spike stock pick that’s poised for gains. Check it all out in my International Speculator advisory.