Justin’s note: As regular readers know, Strategic Investor editor E.B. Tucker is one of the best big-picture thinkers in our business. Recently, he put two of the world’s most lucrative trends on your radar: legal sports betting and America’s “new energy metals.”

But E.B.’s more than just a big trend guy…

Like me, he believes that the key to true wealth is living a full life, rich with experiences. E.B. gets his edge by constantly traveling, talking to people, attending shareholder meetings, and doing boots-on-the-ground research.

We want to give you some of that edge, so I got permission to share E.B.’s most recent “Notes From the Battlefield,” a popular section from his Strategic Investor newsletter.

The following is one of the most interesting pieces you’ll read all year. E.B. spent a night at a former insane asylum while he was in Buffalo… a trip he made to hear from investing legend Jeffrey Gundlach. Read on to get his key takeaways…

When I’m on the road, I do my best to avoid chain hotels. They’re sterile and boring. That usually goes for the guests, too. With a few minutes of research, I can usually find a local boutique hotel for the same price or less than the national chains.

Boutique does not always mean luxury. I’m not talking about laying around in a spa. What I’m looking for is a refurbished piece of history with a story behind it.

There was a period in the late 19th and early 20th century where the U.S. had unmatched wealth. Some of the buildings built during this period are structurally irreplaceable. There’s no comparison to the aluminum wall studs and Chinese drywall used to build most buildings today.

I found one of these historical gems on a quick trip to Buffalo, NY last month. I’ll explain later why I went to Buffalo… but first, the hotel.

As you can see in the picture below, this hotel would be impossible to rebuild today. This 180,000 square foot, 180 feet high section I’m standing in front of is less than half of the original complex.

The hotel only opened two years ago after a more than $100 million renovation. Before that, it sat empty for 40 years. For 90 years before that, it was an insane asylum. 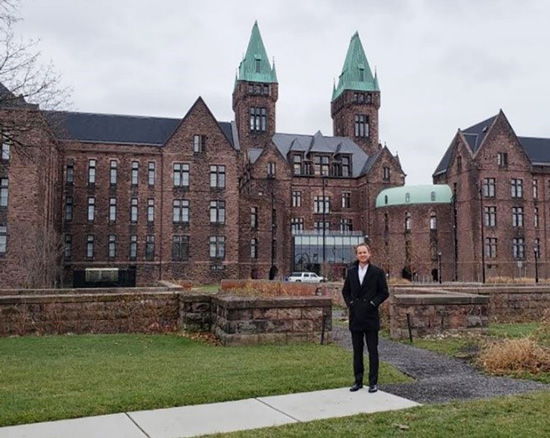 E.B. in Front of Hotel Henry in Buffalo, NY

In 1870, New York State commissioned the Buffalo State Asylum for the Insane. It took eight years to build.

He paired up with a leading psychiatric doctor and Frederick Olmsted who designed Central Park. Together they created a complex of buildings spanning nearly 500,000 square feet. The complex was so large that Richardson’s plans called for a miniature railroad connecting all of the basements. This is how the staff delivered food, laundry, and supplies between buildings.

It’s anyone’s guess how many millions of pounds of Medina sandstone it took to build the entire structure. This unique, durable sandstone comes from nearby Medina, NY.

From the slate roof to the ornate staircases and giant copper spires, the resources devoted to housing the insane back then are incredible. These days, insane people live downtown in parks or drift from place to place.

Richardson and his fellows designed the patient rooms with specific details in mind. They had 20-foot ceilings. As you can see in the exterior picture above, large windows filled the rooms with natural light. It also gave patients a clear view of the facility’s sprawling 200-acre grounds.

The hallways were 18 feet wide to encourage patients to feel comfortable. 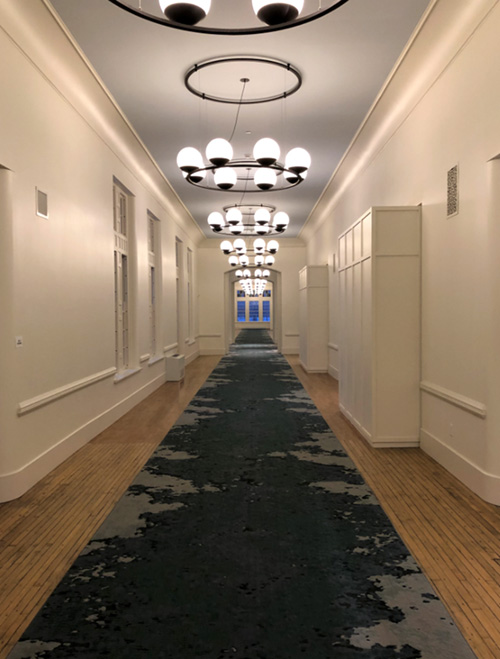 Hallways as Long as 200 Feet

Today, the hotel has 88 rooms. It also has several large banquet spaces in the upper levels of the building. The rates are reasonable at around $155 per night.

The hotel staff has the walls peppered with beautiful art. That’s part of the reason I went to Buffalo. 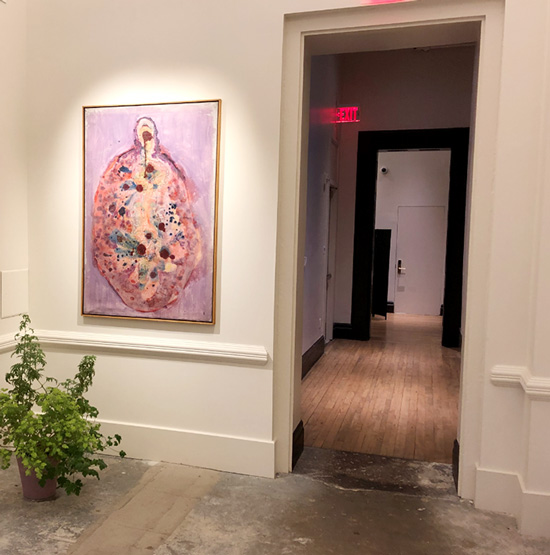 Why I Went to Buffalo, NY

The reason I went to Buffalo was to meet Jeff Gundlach. He’s the billionaire founder of DoubleLine Capital, a notable fixed income fund.

Gundlach grew up in Buffalo. He recently donated $42 million to the city’s Albright-Knox art museum. Soon it will become the Albright-Knox-Gundlach museum. Gundlach visited the museum as a child.

We arrived at the museum at the same time. The curator offered me a tour and Gundlach joined us. After about 10 minutes he took over the tour. He’s a pacing genius. He’s also an art savant.

With a collection of untold value, Gundlach thinks about artists the way I think about stock charts. The artist has periods of popularity and periods of stall. A Rothko painted in the mid-’50s is entirely different from one that came 10 years later. Gundlach can tell you why… and he did.

We zipped through the museum that will soon bear his name. Then we joined a group of around 100 people for a presentation and Q&A session. 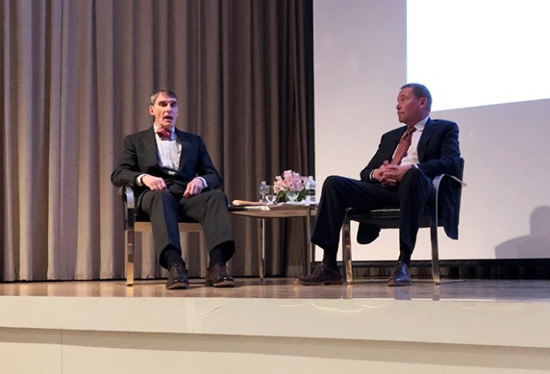 Each year in early January, Gundlach lays out his predictions for the coming year. That’s something we at Strategic Investor do in December.

After listening to his talk and the questions, I pulled him aside. I told him if I arrived at his talk via time travel from another period, my conclusion would be gold was on the cusp of taking off. Almost every one of his predictions, if true, will be positive for gold and difficult for mainstream assets.

Gundlach told me his recommendation on the Barron’s Roundtable due out that week was the VanEck Vectors Gold Miners ETF (GDX). I told him I prefer gold royalty companies, but there was no reason to split hairs.

Before we parted ways, I told Gundlach to keep in mind that not one of the questions he fielded from the crowd mentioned gold that day. It’s common for the asset most likely to thrive in a coming time to be of little interest to mainstream investors. He acknowledged the same.

Two of the core holdings in my Strategic Investor portfolio are precious metals miners. They’re high quality and totally off the radar of most investors. If 2019 plays out the way we expect it to, they’ll likely finish the year much higher.

Justin’s note: You can gain access to E.B.’s precious metals miners, and all of his boots on the ground research, with a subscription to Strategic Investor. You can sign up today here. I also recommend you check out our free special report on gold where we show you the top ways to buy and store physical gold.

And if you enjoyed today’s piece by E.B., you’ll want to mark your calendars for February 27. That’s when E.B. will share the details on his latest venture. He’ll be revealing the top strategy he uses to make money in today’s volatile market. This is a truly unique opportunity to learn about a strategy you can use to generate gains 10x bigger than options.

We’ll be sharing more details in the coming weeks. We’ll also share E.B.’s top insights so that you’ll be prepared for the big night. Stay tuned…

Do you think travel and a life of rich experiences affects trading? Let us know at [email protected].