Rachel’s note: It’s no secret that inflation is the highest it’s been in decades… reaching a record 9.1% just this month.

So when Casey Research friend and tech investment expert Jeff Brown came to us with a strategy for protecting your wealth and profiting in today’s volatile market, we knew we had to share it with you.

What’s more, these opportunities are open to both accredited and non-accredited investors. All you need is your usual brokerage account.

Last month was one for the record books – but not in a good way.

Stocks officially closed out their worst six-month start to any year, going back over half a century.

And other conventional “safe haven” assets are in decline as I write. We can see this in the chart below. 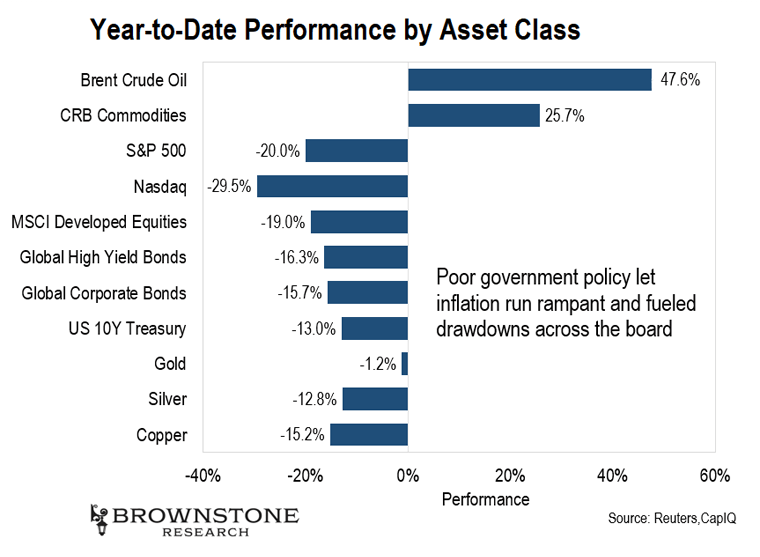 Unless we were heavily invested in oil-related stocks or select commodities, as seen above, chances are that all of us are seeing red in our portfolios.

Many of us have never been in a market this volatile.

To make matters worse, inflation – as measured by the Consumer Price Index (CPI) – is at 9.1%, year over year. That’s a multi-year high.

Investors are in a tough spot right now. We’ll want to find a way to insulate our wealth from the daily cycles of the stock market and find investments that can greatly outpace inflation.

Looking Beyond the Public Markets

Investors are facing one of the most volatile stock markets in recent memory.

Yet if we look at the private markets… they continue to march on.

While the markets hit historic lows, investors poured $37.6 million into Regulation Crowdfunding (Reg CF) deals in June alone. And this number is roughly on par with what we have seen over the last 12 months.

Despite the broader turmoil in the markets, capital is flowing into private companies at a record pace… 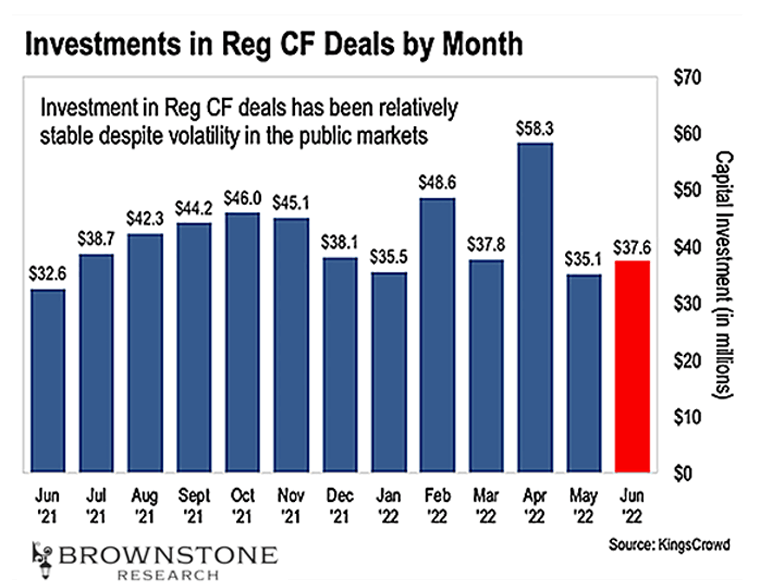 And we can see this in the venture capital (VC) community as well. The data year-to-date, while not quite moving at the same pace as last year, is still strong. While we won’t see the record levels of 2021, 2022 will almost certainly be above 2020 levels. 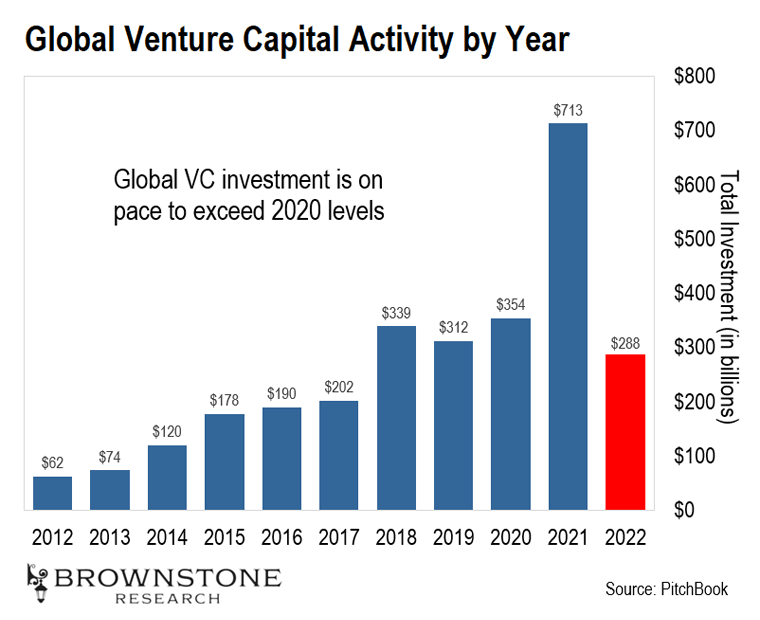 This data is current through the end of June. Meanwhile, the Federal Reserve (Fed) officially raised its key rate by 75 basis points. That’s the biggest increase since 1994.

And as I shared above, the major indices are now in bear market territory.

Private companies are one of the few assets that aren’t broadly affected by the decline in stocks. Yes, I do expect exits – IPOs and acquisitions – to decline this year. And it’s true we likely won’t reach the record VC levels we saw in 2021.

But private investments are not punished by the broader market volatility or the news cycle. Once we place an investment, we can just sit back, relax, and allow these companies to build and grow. And when the economy and markets get back on track, the revenues will follow.

And because we are investing at the earliest stages, the returns from quality private investments can greatly outpace the rate of inflation.

But if we’ve ever read my work, I’m sure we already know this…

We likely know of the upside potential from private companies. And there are many famous examples of venture capitalists turning small investments into staggering returns.

The question we should consider today is this: Will private investments still perform in an economic environment like this?

It’s a fair question. And here’s my answer.

Investing Through a Bear Market

I know investing through bear markets can be unnerving. Our natural inclination is to step back until things settle down. The truth is that I have learned to love investing in private companies, especially in market volatility. I have always found the private markets a kind of shelter from the storm.

For starters, investors tend to be able to invest at even more attractive valuations and have access to higher-quality deals.

In a hot market, venture capital funds throw money around at elevated valuations to beat each other out of an attractive deal. This ensures a healthy amount of competition… but it can also mean many investors are cut out of the deal.

Great private investors – whether they are angels or venture capitalists (VCs) – are continuously deploying capital into different “tranches” of investments year after year.

And it may surprise us to know that some of the most successful technology companies of today were founded – and raised capital – during or shortly after periods of volatility.

In November of 2010, a company called Airbnb held its Series A funding round. The company was valued at just over $67 million.

At the time, the world was still reeling from the sub-prime mortgage crisis. It was one of the worst economic environments in history. I suspect many investors weren’t willing to deploy capital into a private company like Airbnb.

But those who did were rewarded…

Even with the recent volatility, Airbnb is a public company with an enterprise value of $53 billion. For private investors who held on, that represents a return of more than 79,000%.

Pinterest is another company I’m sure we’re familiar with. But what we might not know is that Pinterest held its Series A funding round in September of 2011.

Once again, it was a terrible economic environment. The company raised funds at $52 million. Today, Pinterest trades with an enterprise value of $9.6 billion, an 18,000%+ return.

And then there’s Uber…

We would probably be hard-pressed to find a better private investing success story. Uber held its seed round in September of 2010 – just two years after the collapse of Lehman Brothers – at a $5.4 million valuation. Even with the terrible volatility we’ve seen, Uber is now a public company with an enterprise value of over $46 billion.

Now – of course – these are some of the most iconic examples. Not all private investments will work out. But I share these examples to show that disruptive, private companies can be found in any market.

They can use the time, even in poor economic conditions like these, to build out their product and/or service and get a leg up on the competition. And that will mean they are ready when the economy springs back to life.

These tiny, “day one” companies can grow into multibillion-dollar corporations. Very few people know about them. But the wealth generated is unlike any other investment class that I know.

And it’s one strategy that I believe every investor needs to grow their wealth outside of the stock market in the years to come.

I’ve spent years building up my own portfolio of private investments… and this month, I’m inviting you to join me for the next wave of exciting private deals I’m recommending in 2022.

On Wednesday, July 27, at 8 p.m. ET, I’ll be hosting a special presentation to give you all the details around how these private investments work… and how we can build our stake in the next generation of exciting startups today. I don’t want anyone to miss out on this opportunity.

This is the ultimate recession-busting, inflation-fighting strategy that billionaires and insiders are using to protect and grow wealth in 2022.

What’s more, these opportunities are open to both accredited and non-accredited investors. All you need is your usual brokerage account.

To get the full story, I encourage you to join me Wednesday, July 27 for my special event – Jeff’s Private Deal Room.

I hope to see you there. Simply click right here to reserve your spot.