On June 16, we explained the oil price was heading up.

We pinpointed a key trading level…

And said the price was going to head that way.

Key news from yesterday helped push it towards that goal.

In short, the price is moving up – as we predicted.

What does that mean now? And can we get any clue about where it’s going next?

Today we return to the subject of oil. An area we’ve covered several times in recent weeks.

And for good reason…

Heading to Our Key Price Target

As we write, the West Texas Intermediate (WTI) crude oil price is $75. Yesterday, it traded above $76. It’s closing in on our short-term target price of $77.55.

We showed that here, in the June 16 edition of the Dispatch.

When we published that analysis, the oil price was around $71. So it has gained around 7% since then.

News yesterday helped push the price closer to our short-term target of $77.55. As Bloomberg reports:

OPEC+ was plunged into crisis as a worsening fight between Saudi Arabia and the United Arab Emirates blocked an oil-supply increase.

What happens next will determine whether the breakdown of talks – which sent crude climbing toward $80 a barrel – could escalate into a conflict as bitter and destructive as last year’s price war.

At stake is the stability of the global economic recovery amid growing inflationary pressures, and the ability of the producers’ alliance to retain its hard-won control over the oil market.

That won’t please the Federal Reserve. The Fed had expected the oil price to fall. 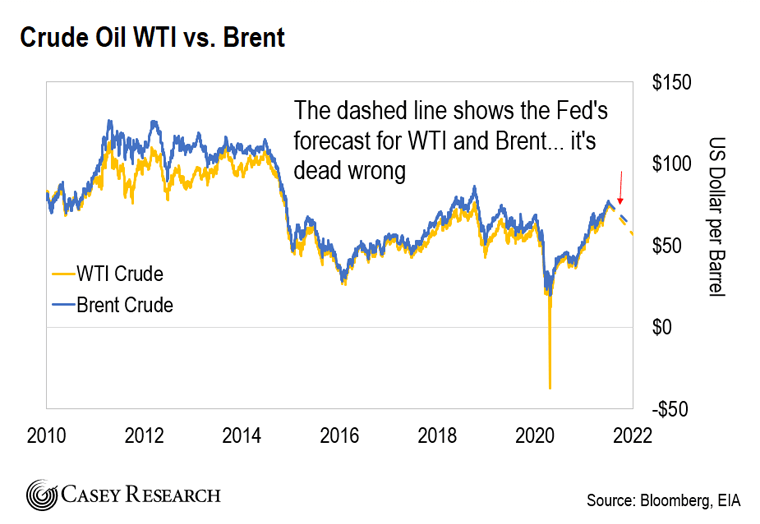 We ask you to pay attention to the dashed lines on the right-hand side of the chart. This is the Fed’s forecast for WTI and Brent crude (Brent is the benchmark for European oil prices).

The line peaks around $60 per barrel on the day the chart was released. The folks at the Dallas Fed believed that would be the peak… that the price would plateau and fall heading into 2022.

So far, it hasn’t played out that way.

The Fed Completely Missed This

As the six-month price chart for WTI crude oil shows below, the price has continued to rise. In fact, it’s up around 20% since the Dallas Fed published its research: 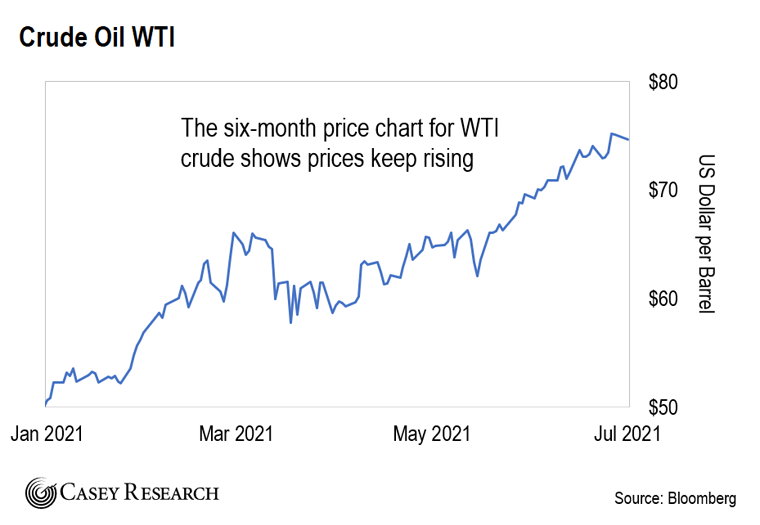 To be fair. We don’t criticize their predictive powers. We don’t claim to get every prediction right either.

The most important thing is that the Fed would have used this data and projections leading up to its June 15-16 meeting. And even though the oil price had already started to surge by then, the Fed stuck to its guns saying that inflation won’t be a problem.

Of course, there’s one other reason why the Fed may have ignored the rising oil price.

Rather than using the Consumer Price Index (CPI) as a measure of price inflation, the Fed prefers to use the Personal Consumption Expenditures Price Index (PCE).

That’s important, because unlike the CPI, the PCE excludes food and energy.

As we’ve shown previously, it’s not just oil and gasoline prices that have risen. Basic grocery items have risen in price too… not just from this time last year either.

Contrary to the popular belief that prices fell during the peak of the pandemic, the government’s own data shows that grocery prices have risen steadily since 2018.

The argument for using PCE rather than CPI is that it “smooths” out (or rather, “erases”) the volatility from food and energy prices, supposedly providing a clearer picture of prices.

We’ll mostly let others argue the merits of that. All we’ll say is that food and energy are two of the biggest weekly household expenses. So they are important.

The big questions now are, “what does this mean for the oil price, and how it will affect price inflation?”

A Mistake to Ignore This Price Action

In the short term, $77.55 remains a key level, as we explained in our previous analysis. That level has been an area of support and resistance for the oil price going back to 2011.

That means when the oil price has fallen to that level, it bounced off it… until major selling pressure in 2014. After falling below that level, it hasn’t risen above it since.

In fact, the last time the price tried to go higher was in 2018. It failed. Will it break through this time? Perhaps not at the first attempt. Traders know it’s a key level. They can see it in the charts.

That means there will likely be a lot of sellers taking profits at that level.

For that reason, it’s likely that investors still have time to get into the oil and energy trade. Whether you use technical analysis for your investing or not, it’s a mistake to ignore a level like this.

Importantly, we’ve seen over the past 10 years, when it has hit that price, it has resulted in a fast price reaction, with the price moving by 30% or more in the weeks following.

As investors, that’s important to know. For that reason, we’ll keep a close eye on the price action. Prices rarely rise in a straight line. So it could still be some time before it hits our target level – if at all.

But we (and the Casey Research experts) still like the fundamentals on this story. And once the price chart gives us more information on where the price is likely to head next, we’ll make sure to let you know right here.

Stay tuned. The price action in oil is getting interesting. It’s a story you shouldn’t miss.