Each day we remind you why this letter exists.

And why our publishing business exists.

There are two reasons:

Today and for the next few days, we’ll cover a story that senior analyst, geologist, and resources expert Dave Forest is particularly excited about. It’s a development that has just emerged in the markets.

It’s one that he believes gives investors a great opportunity to profit from one of the market’s big new trends.

We’ll explain everything below…

If you’re new here, welcome to the Dispatch. If you’re a regular reader, welcome back.

Every member of the Casey Research team devotes their day to putting the best investment ideas in front of you.

We do this by showcasing the research and analysis from in-house investing experts Dave Forest, Nick Giambruno, and the founder of our business, Doug Casey.

Today, we’ll show you an example of our top-drawer research… the prelude to a theme we’ll cover this whole week…

It Went From Bad to Worse for Oil Stocks

Eighteen months ago, there was just about zero interest in oil stocks.

The price of oil stocks, as measured by the Energy Select Sector SPDR Fund ETF (XLE), was down over 77% from its 2014 high. 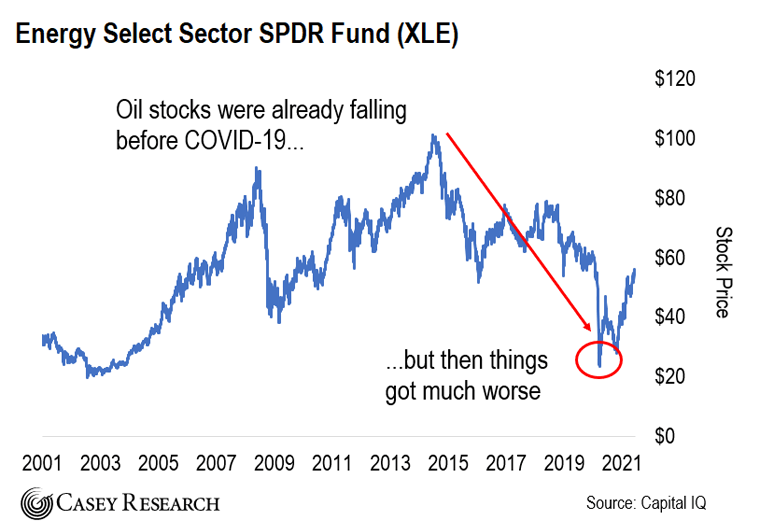 Then it got worse. COVID-19 struck, governments issued stay-at-home orders, and domestic and international travel ground to a halt… and the oil price plunged.

No doubt you remember the extraordinary occasion in April last year. That was when the price of crude oil futures fell to minus-$40. No one had ever seen anything like it.

It meant that those who owned oil, or who were obligated to take delivery of it, were willing to pay someone else to take it off their hands.

But since November last year, the price has started to rebound.

That brings us to three reasons for the oil price surge, and why Dave is convinced it’s set to go higher…

First, there was the change in the White House.

Whether you agree with the view or not, investors started to figure that regardless of anything else, a Democrat-controlled Congress and White House would work closer together, with less conflict from either side.

(Of course, while the mainstream hates political gridlock, we’re in favor of it. The less politicians meddle, the better.)

The feeling was that a cozy relationship between Congress and the White House would make the passage of stimulus programs more likely. That could also result in the economy reopening quicker.

Second is rising inflation. We’ve covered this in some detail in the Dispatch. Years of cheap money – due to money-printing and low interest rates – is continuing to push up prices.

Not to mention the stimulus checks…

And while the Federal Reserve would have you think this is temporary, it’s not. As we showed in Friday’s Dispatch, basic grocery prices have been going up for the past few years.

But only now are folks starting to pay attention. Just last week, Chipotle (CMG) announced it was raising menu prices, to factor in increased labor and input costs.

These factors are the same as those pushing up oil and energy prices.

Third, there’s the recent court decision in The Hague, Netherlands. This will force Royal Dutch Shell (RDS-A) to make further cuts to emissions. Meanwhile, Chevron (CVX) shareholders have voted to force the company to cut its emissions as well.

Plus, big investment funds backed the nomination by activists of two board members to the ExxonMobil (XOM) board.

Many believe that the upshot of all this is that companies will face more red tape when it comes to exploring and drilling for oil. Environmentalists hope and believe that will make it less attractive for oil companies, and that it will mean a faster transition to clean energy.

That’s possible. However, Dave Forest believes it could have a different effect…

As we’ll explain this week, the combination of inflation, red tape, and activism could be the catalyst that not only helps boost the oil price… but will help boost oil stocks.

Think about it this way. If the activists make it more expensive for companies to produce oil, the oil companies will likely find it harder to get approval for big projects.

In the short-term at least, that could affect supply. And if it affects supply, that could push up the oil price.

Of course, as anyone familiar with supply and demand knows, a higher price tends to draw more supply into the market. And that will be attractive for higher-cost producers.

For instance, as the oil price slumped over the past couple years, it was bad news for the shale oil drillers. On average, they need the oil price to be around $60 per barrel to be profitable.

This is where Dave Forest sees the biggest opportunity in energy right now.

Well, despite the activism, large integrated oil companies will likely do well, due to their market dominance.

Shale oil producers will likely do well as the oil price rises. And then there’s also the small- to mid-sized producers and explorers. If red tape makes it harder for companies to get permission to drill in new areas, that should make takeovers more likely.

Finally, it could also be good news for the large oil services companies. If there are fewer projects, it seems likely that the dominant players in the industry will become even more dominant.

The upshot of all this is that far from being the end of oil, this kind of activism and red tape could give certain players in the oil industry a new lease on life. And for investors, it could present a new opportunity to profit from what we can only describe as “oil’s new boom.”

We’ll have more to say on this subject (and how to play it) the rest of this week. Stay tuned.