But after reaching the upper echelons of the financial world, Nomi grew discouraged by the unethical practices that permeated the banking industry…

So she walked away from Wall Street and set out to shed light on how financial systems are manipulated to serve the interests of an elite few… at the expense of everyone else.

In today’s Dispatch, Nomi shares why she is bullish on one very important commodity… why she’s putting it on our radar now… and what events over the last few decades have impacted its price.

“A very important source of energy of the future.”

Uranium is used primarily in nuclear power plants. Today, they generate about 10% of the world’s electricity.

And as I wrote in my reply to Yves in a recent mailbag edition, I believe nuclear energy has a critical role to play in the energy transition.

And I’m putting it on your radar right now because I believe we’re at the start of what looks to be a huge bull market in uranium.

So today, in the first of a two-part series, I’ll talk about some key events over the last few decades that have hugely impacted its price.

I’ll tell you about recent developments that I believe will set the stage for a uranium bull market of historic proportions.

And in the second part, I’ll show you a simple way to position yourself to profit as it takes off.

But first, let’s take a closer look at this controversial metal… and how the market for it has swung in response to catalytic events in recent decades…

Not a Dirty Word

To some people, nuclear is a dirty word. They associate it with tragedies like Hiroshima, Nagasaki, Chornobyl, and Fukushima.

But that wasn’t always the case…

A German chemist first discovered uranium in 1789. It was used as a colorant for ceramic glazes and tinting photographs.

It wasn’t until 1866 that its radioactive properties were discovered. And its potential use as an energy source only came to light in the mid-20th century.

And like all commodities, the uranium market has gone through several boom-and-bust cycles.

From Bust to Boom and Back Again

Demand for uranium dwindled. And by 1990, the price per pound was below $8.

In 2003, demand from China and India’s nuclear programs was on the rise.

But in April that year, the McArthur River Mine in Canada flooded.

McArthur River is the largest uranium mine in the world. It makes up about 13% of the world’s annual production.

The mine closed down for six months. This kicked off a legendary bull market. The price of uranium went up more than 1,800% to roughly $140 in 2007. You can see that huge spike in this chart. 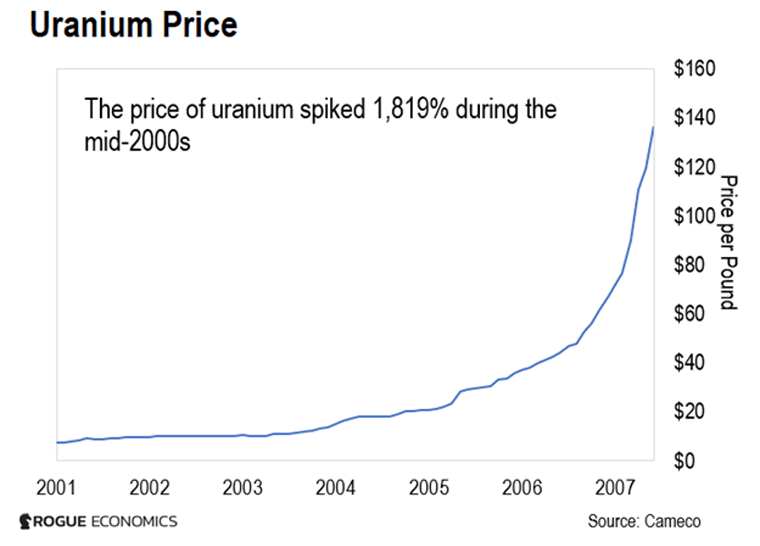 But the next bust came soon after…

But on March 11, 2011, one of the largest earthquakes in history hit off the coast of Japan, unleashing a massive 50-foot tsunami.

The tsunami caused a meltdown at Japan’s Fukushima nuclear power plant, releasing radioactivity into the air.

It was the worst (and only) nuclear disaster since Chornobyl in 1986. And it changed Japan’s relationship with nuclear power.

Japan had embraced nuclear energy in the 1960s. Before Fukushima, it had 54 nuclear reactors in operation, supplying 30% of the country’s electricity.

After Fukushima, Japan took most of its nuclear reactors offline. The nuclear energy sector was once again in the doghouse. Global demand for uranium tanked.

A global supply glut followed… and another bear market. 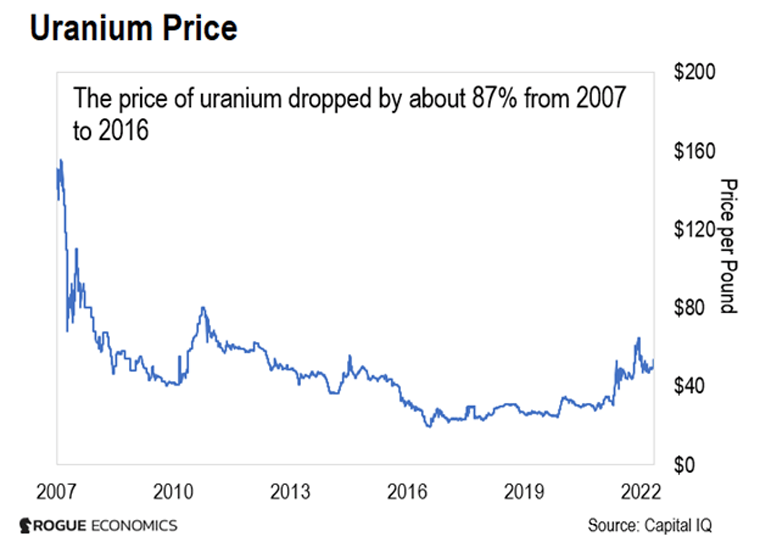 This led to mine closures, including the McArthur River Mine, which shut down again in 2018.

It costs roughly $50 to produce a pound of uranium. With prices on the floor, it just wasn’t economical to continue production.

But this drop in supply hasn’t been the boon for prices you’d expect.

See, the sudden pullback in demand after Fukushima led to increased uranium inventories. This has kept prices suppressed, even with McArthur River offline.

In fact, the only reason the uranium price is not higher today is that utilities have been able to rely on the sale of existing uranium inventories to continue operating.

Kazakhstan is the world’s biggest supplier of uranium. It produces 45% of the world’s uranium. But since 2016, it has cut production by more than 11%.

Now, Kazakhstan isn’t exactly a stable jurisdiction. For example, earlier in 2022, the worst riots Kazakhstan had seen since gaining independence three decades ago rocked the country.

Also, much of Kazakhstan’s uranium travels through Russia before it is exported to global markets, including Europe and Canada.

And right now, this supply is anything but secure.

With the European Union (EU) set to halt most crude oil purchases from Russia starting December 5, the Kremlin could impose retaliatory sanctions.

If that happens, it wouldn’t be a stretch for Russia to cut off certain countries from its supply of nuclear fuel. It’s already doing that with natural gas by shutting down the crucial Nord Stream 1 pipeline.

That’s also why a ban on Russian-built reactors and new nuclear projects has remained off the European Union’s sanctions radar so far.

On the Cusp of a Bull Market

I believe we’re on the cusp of another bull market in uranium. The already reduced supply is looking extremely precarious… just as the global energy crisis is bringing about a “sea change” in sentiment about nuclear energy worldwide.

Countries once opposed to nuclear energy are now embracing it as they seek to reduce their reliance on fossil fuels and bring their spiraling energy costs under control.

In tomorrow’s essay, I’ll shed light on some recent news from an unlikely source that I believe will drive a historic bull run in the uranium market.