Benjamin Roth had one job to do.

Creditors hired the young attorney from Youngstown, Ohio to collect a bad debt. He’d have to track down the delinquent borrower and wrestle $50 from him.

Business was bad. Money was tight. Everyone was just trying to get by.

Roth, like many other World War I veterans, had a family to support. He did what he had to do to survive during the Great Depression.

Times were so bad, debt collectors like Roth felt bad chasing down delinquent borrowers. Nobody escaped the Depression. Each sign of hope faded into more suffering. Things got worse and worse until people thought they’d never get better. That’s what finally marked the bottom.

This story comes from The Great Depression: A Diary by Benjamin Roth, which gives us a glimpse of life during the 1930s. Roth’s son Daniel decided to publish parts of his father’s diary after the 2008 financial crisis hit.

More importantly, though, it’s a window into a point in history that almost no one today has experienced. It also serves as a guide for today, telling us what to do – or more importantly, not to do – next.

Cheap Can Get Cheaper

Roth survived the Great Depression. However, the man Roth had to collect from wasn’t in good shape. As Roth put it on December 14, 1931:

The record shows that in 1930 – over a year after the big stock crash – this man invested over $100,000 in common stocks at what then seemed to be bargain prices. The total value today at market prices is $30,000.

Immediately after the 1929 crash, the speculators rushed in to buy “bargains” but were badly mistaken, because the market kept going down and down even though industrial leaders kept on assuring the people that everything was fine and the worst was over.

If this sounds familiar, it should.

The 1929 stock market crash didn’t just happen overnight. It was a build-up of excesses from the Roaring Twenties.

When the bubble finally burst, not everyone recognized it.

Even though plenty of investors lost big on Black Monday (October 28, 1929), it wasn’t the initial crash that wiped them out. The Dow lost over 40% of its value from its highs.

Then, investors started buying the dip.

It was the “bargain” hunting of the ensuing months that signaled the death blow. 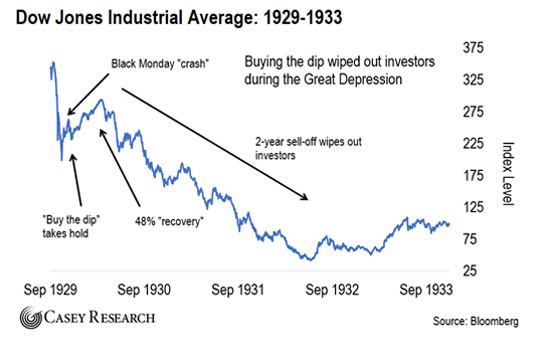 If you look at the above chart closely, the buy-the-dip crowd thought boom times were back by April 1930. Then things changed. It wasn’t until July 1932 that investors finally gave up.

Just like the man that went all-in in 1930, far too many people today are “buying the dip.” And with a rebound of 37% on the Dow as I write, it’s looking like a great move: 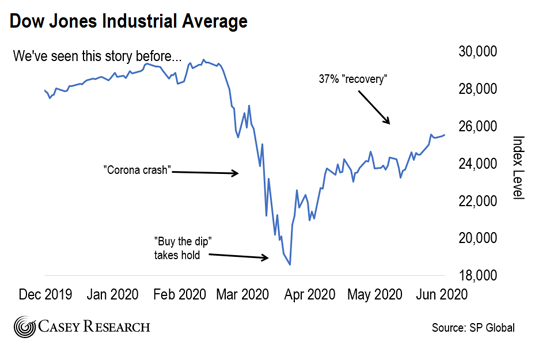 However, we don’t know what will happen tomorrow – let alone in the months ahead. It might feel good right now.

But ask yourself, “Does a rising stock market reflect reality?”

At the end of the day, it doesn’t matter whether you agree with the mass shutdowns. The damage is done. Now’s the time to think about what happens next.

Where Does a Strategic Investor Go From Here?

The strategic investor doesn’t trade with the crowd. He sits and waits, looking for the right time to pounce.

Today is not that time.

Keep in mind, the 1929 crash didn’t cause mass unemployment. Instead, it uncovered problems the Roaring Twenties had created, like buying with debt, trading on margin… and no one thought things would come crashing down.

As more and more people lost their jobs, there was less and less spending. This cycle continued for years. We could see a similar cycle today.

However, this time is a little different. First, employers started cutting jobs. Consumers cut back on spending. Goods started piling up. Employers cut even more jobs.

For instance, consumer spending in the U.S. accounts for almost 70% of the entire economy, according to the U.S. Bureau of Economic Analysis. Of that, about 40% is retail sales.

Recently, we got a glimpse of what happens when the world shuts down. The numbers were catastrophic.

Total retail sales fell 8.7% in March. The April numbers were even worse. Retail sales fell a record 16.7%. It was the worst drop-off in sales since the Commerce Department started tracking the number 30 years ago.

At the depths of the 2008 financial crisis, retail sales only fell about 4%.

Today, over 40 million people are out of work since the start of the shutdowns. That’s more than enough to wipe out all job gains over the past decade.

Businesses aren’t running. No one is traveling. Spending is all but gone except for the most basic goods.

Heart of the Economy

At the same time, politicians and talking heads are optimistic that when they signal the all-clear, things will go right back to normal. They talk of a “V”-shaped recovery. But that can’t happen unless people start spending again in force.

No job. No paycheck. No spending.

Then goods start piling up and employers cut even more jobs. There’s no telling how long this goes on.

This isn’t to say we’re headed for another depression. Every downturn is different. No one knows how all of this will end until it’s over.

However, we doubt all the jobs lost will come storming back in the months ahead.

According to the Small Business Administration, small businesses with fewer than 500 employees make up about 45% of GDP and nearly 50% of jobs. When a number of these businesses fail to reopen because they run out of cash, there won’t be a job for many people to go back to.

When you stop the heart of the economy from beating, it’ll take some time before it gets pumping again.

The point is, the economy had a heart attack. Today, it’s on life support.

However, one thing we can say for certain is, this crisis will change consumer behavior. Scores of people racked up tons of debt over the past decade. They used that debt to buy the latest smartphone, TV, or fully loaded car. They took the phrase “Keeping up with the Joneses” to a whole new level.

Now, they’re desperate to find cash. The scars of this crisis will last for years, just like they did during the Great Depression. When this is over, most Americans will look to save more than they spend. They won’t ever want to be dependent on debt again.

There will be a time to buy stocks.

But for now, it’s more important to be patient – and strategic – and pick your spots carefully.