Justin's note: Today, I want to share an exciting moneymaking idea that you probably haven’t considered. I’m talking about being able to spot takeover opportunities. If you know what to look for, it can prove to be a highly lucrative strategy.

Louis Basenese, chief investment strategist of The Takeover Alert, is an expert on this subject. In his essay below, he explains why this strategy works and what signals to look out for today…

Nothing jolts a stock higher than an unsolicited takeover offer.

The profits just can’t be beat…

Research from The Journal of Economic Perspectives pegs the average gain at 38% based on a sample of more than 4,200 deals.

As CNBC reports, “Buyout firms are paying the highest prices for deals since the financial crisis.” That’s driving up prices for strategic buyers, too.

Keep in mind, most of these gains are realized in a single day!

I’m sure you wouldn’t argue with single-day returns like that.

Obviously, these examples only tell part of the story…

There are countless examples of this occurring in the market.

Frankly, I’ve yet to find another investment with similar upside potential in such a short amount of time.

The tricky part, of course, is knowing how to identify takeover targets before a deal is announced.

That’s where my expertise comes in handy. Because I have a great way to spot these deals early.

To win at the takeover game, you have to identify companies in time to “skim” profits as a deal is announced. And it’s actually not that difficult if you know what to look for…

After evaluating hundreds of deals in recent years, I’ve discovered five signs that a takeover could be nigh.

For good reason, the bulk of merger and acquisition (M&A) deals are announced on Mondays. That’s because investment bankers use the weekends to finalize deals. This way, there’s no chance someone can leak information and impact current prices ahead of a final agreement.

As a result, if you simply clip out the deals announced in the Monday edition of The Wall Street Journal for a couple weeks, making note of the industries or sectors of each company, you’ll be able to hone in on takeover targets with ease.

How can I be so sure? It all comes down to consolidation trends…

Consolidation trends are powerful predictive tools—because they tend to persist.

Think about it. When your biggest competitor buys a rival firm and doubles in size overnight, there’s only one way to respond: Find a suitable acquisition of your own to remain competitive.

So by focusing on those industries and sectors undergoing the most rapid consolidation, we can isolate high-probability targets.

Nobody knows better than insiders if they’re preparing the company for an eventual sale. So keep an eye on their buying activity.

If they start buying in clusters, a takeover could be in the works. And if the company happens to be in an industry that’s consolidating as well, the chances of seeing an offer are even greater than expected.

We’ve all been told secrets before. And what do we do? We eventually share them with someone. On Wall Street, privileged information leaks out in a similar fashion. And the way to track such leaks is through daily options trading volumes.

If you’ve found a stock that meets all the criteria above, pay attention to trading activity in the front-month call options. As a Yale study confirmed, “Prior to takeover announcements, call volume imbalances are strongly positively related to next-day stock returns.”

Put simply, if a stock is trading for $10 and investors pile into $15 front-month calls, the only explanation is a takeover. Nobody’s foolish enough to buy options that require a 50% move in the stock in less than 30 days to profit. Unless, of course, they have very credible information.

We’ve already seen this phenomenon play out many times this year—and there will be many more!

Whether it’s a new drug, a mammoth oil discovery, key market share, distribution channels, or a few promising patents, the real reason a company is acquired is because it owns a particular asset (or assets) of value to the acquirer. So it stands to reason that we should only invest in companies with such “must-have” assets.

Armed with this information, I’m confident you’ll easily be able to spot companies in the takeover crosshairs. And the timing couldn’t be more perfect.

Despite all the dealmaking, though, there’s still ample cash—or what I like to call “deal grease”—to fuel even more takeovers in 2017.

Consider: Collectively, S&P 500 companies entered 2017 with $1.54 trillion in cash, according to FactSet data.

That’s a lot of excess cash that needs to be put to work. Given today’s slower growth environment, it’s inevitable that a large chunk of it will be used to scoop up high-quality takeover targets. Growth via acquisitions is the only way large companies will be able to satisfy shareholders.

At the same time, private equity shops, which have a mandate to put their cash to work quickly, are sitting on almost another trillion dollars in dry powder (see chart below). 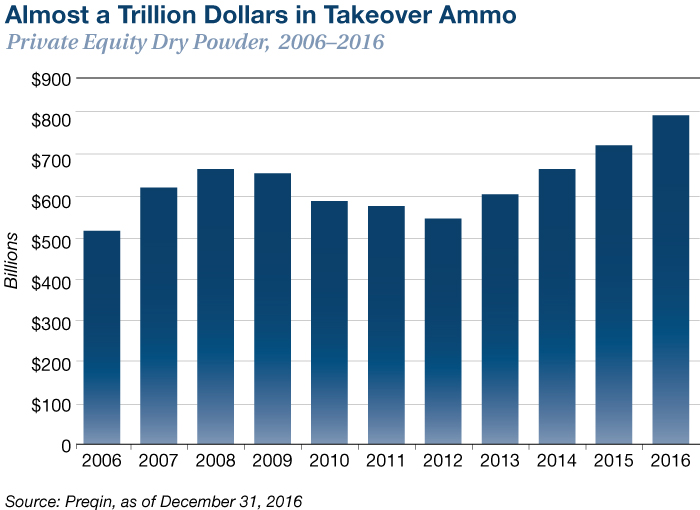 Not to mention, interest rates remain at historic lows, which allows buyers to multiply their buying power by using leverage.

Add it all up, and we couldn’t ask for a more perfect storm for takeovers.

And if you follow my five signals, you’ll be able to spot takeover opportunities well ahead of most other investors.

Ahead of the tape,

P.S. Now, I know that some of you don’t have the time or resources to scour the market for opportunities like this. That’s why I’ve developed a brand-new investment alert service to identify these stocks before they’re “M.A.R.K.E.D.” by Wall Street. And that’s the key… because once they’re “M.A.R.K.E.D.,” they go up 100% of the time.

In my new online presentation, I show exactly how and why that works. And you can check it out here for free.