It’s based on the same type of strategy that big banks paid her millions to develop during her 15 years on Wall Street.

It can help you make up to 10x your money… whether the markets go up or down. And with the stock market plunging into bear market territory this week, I encourage you to check it out.

To watch the replay of her special briefing, click here.

What I’m about to show you is disturbing…

But it’s something I think every American deserves to know.

Take a look at this chart. It shows shares of Las Vegas casino operator Wynn Resorts in early 2020. 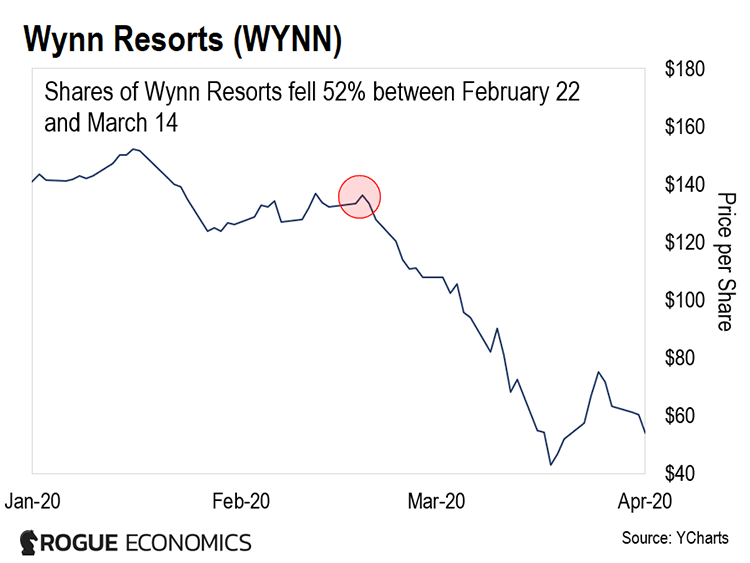 Shares were climbing fairly steadily at the start of the year. But in mid-February 2020, I got what I call a “distortion signal.”

This distortion signal told me that big players on Wall Street and Washington were likely moving cash out of the stock.

This was right before the COVID pandemic took off in the U.S. At the time, nobody was worried.

But this distortion signal (the red circle on the chart) was telling us it was time to get out of Wynn Resorts.

You can see in the chart above what happened next…

Once everyone realized we were dealing with a global pandemic that would shut down the entire world, Wynn Resort shares collapsed.

Four senators dumped millions in stocks while Capitol Hill was being briefed on the coronavirus threat but BEFORE markets started tanking.

These senators were part of a committee that was receiving daily briefings about the worldwide spread of the virus.

And they somehow managed to move millions out of stocks before the markets plunged more than 30%.

But while that is shocking, it’s nothing compared to what happened after the COVID crash…

But on April 6, my system flashed a distortion signal (the red circle on the chart below). It meant money was about to flow into Google. Over the next five months, Google shares shot up… 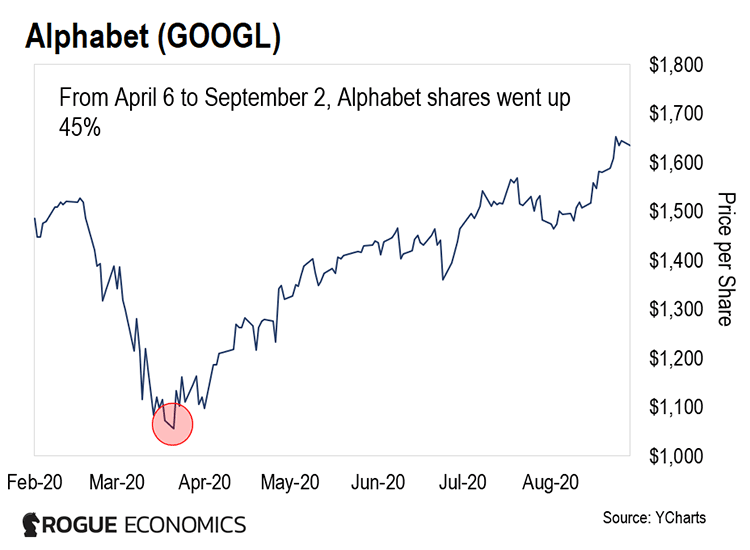 About a year later, Fortune magazine broke this story:

Around the same time that a distortion signal appeared on Google… Nancy Pelosi’s husband was betting big on tech stocks. He bought shares of Google after the crash.

And that was absolutely the right move. From the Google trade alone, Pelosi’s husband made $5.3 million.

By the time the rest of America knew what was going on, it was too late to profit.

But it doesn’t have to be that way. And that’s why I’m telling you this today…

Life-Changing Gains During the Fastest Crash in History

For the past two years, I’ve been testing a new strategy based on these distortion signals.

It can help you get ahead of these big market moves… and make up to 10 times your money, sometimes in just a few weeks.

I get emails all the time from readers telling me they’re worried about the volatility we’re seeing this year.

And that’s understandable. It’s an ugly market out there.

But my strategy is not just hypothetical.

I tested it with a small group of readers in 2020, right in the middle of the COVID crash. It was the fastest crash in history.

While most people were losing their shirts… those readers had a chance to turn $1,000 into more than $8,000 on the Wynn Resorts play I showed you above.

In less than a month, they had the chance to make more than eight times their money – in the middle of the fastest crash in history.

Of course, not every play will make gains that high… and not every distortion signal will result in similar gains.

But the data from 2020 combined with the volatility of 2022 tells me this strategy is ideally suited to today’s choppy market.

And, just to be clear…

I didn’t develop this system to expose the political elite.

My main goal here is to give everyday folks the chance to level the playing field.

And that’s crucial in these distorted times, for anyone who wants to get ahead…

The examples I showed you above are a symptom of The Great Distortion I’ve been warning you about.

It’s the massive disconnect between the markets and the real economy.

As you know, after 2008, the Federal Reserve started creating trillions of dollars out of thin air. From September to December 2008 – just three months – it created $1.3 trillion.

Nobody had ever fabricated so much money so quickly before. Some people thought the Fed had gone mad.

But it was nothing compared to what happened in the aftermath of COVID.

That’s about $31 billion created out of thin air every day.

And in the two years since then, it has created an additional $1.7 trillion. 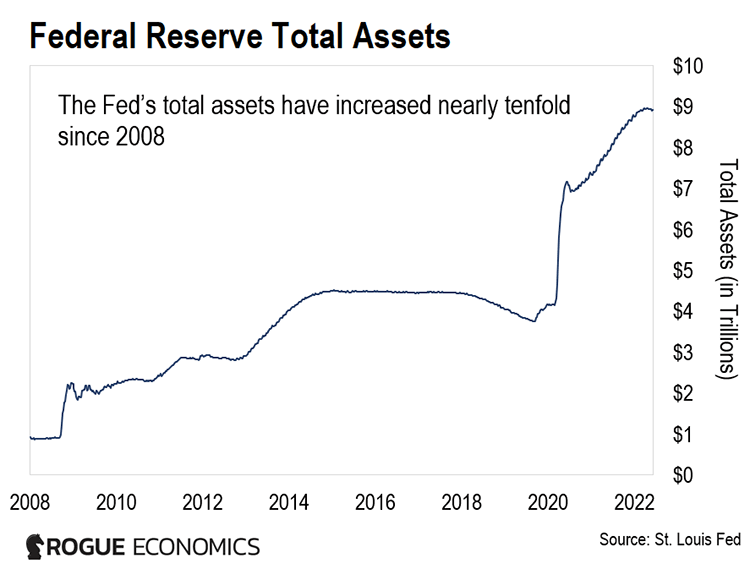 This was the greatest money-fabrication experiment in history. And it has sent The Great Distortion into overdrive.

In the U.S. alone, billionaires’ combined wealth rose over $1.7 trillion since the pandemic started in 2020.

Sixty percent of U.S. small businesses that were forced to close during the COVID lockdowns never recovered.

This is exactly what I mean when I talk about The Great Distortion.

The thing is, all those trillions of dollars the Fed created are still in circulation.

And all this fabricated money is contributing to today’s market volatility.

But if you think the markets are volatile now, I’m afraid things are about to get a lot worse.

There’s an event coming up in August…

One that I believe could trigger the next chapter of The Great Distortion… and create a $4 trillion market shock.

Most of that money will end up going to those at the top of the financial and political food chains – just like we saw during the pandemic.

But if you know what to do, you could wind up with a lot in your pocket, too.

To show you how, I held an online briefing earlier this week.

In it, I revealed the new strategy I’ve been testing for the past two years.

It’s the same type of strategy that big banks paid me millions to develop during my 15 years on Wall Street.

And it can help you grow your wealth whether the markets go up or down.

For all the details on how it works… and how you can use it to level the playing field in these distorted times… I encourage you to watch the replay of my special event.