For over 5,000 years, gold has been mankind’s most enduring form of wealth.

Throughout history, many different civilizations around the world have all come to the same conclusion: gold is money.

That didn’t happen by accident.

It happened because gold has a set of characteristics that make it uniquely suitable as money. It is durable, divisible, consistent, convenient, and most important, it has strict scarcity.

But for the last 50 years, governments and their lapdogs in academia and media have tried to minimize the importance of gold in favor of their inferior paper currencies – which they can, of course, create unlimited quantities of whenever they want.

Ron Paul put it best when he said, “Gold is honest money disliked by dishonest men.”

Paper money and all the ills it brings amount to the scam of the century… and you are the victim.

But here’s the good news…

It’s all going to change sooner than most people think. Not only that, but if you position yourself right now, you could make huge profits.

The Biggest Gold Bull Market Ever

About a year ago, after putting together the pieces to see the big economic and political picture, it became apparent to me that we were on the cusp of something truly historic. I said we had just entered the biggest gold bull market in history.

A few weeks later, the price of gold broke out of its six-year trading range and rocketed higher. 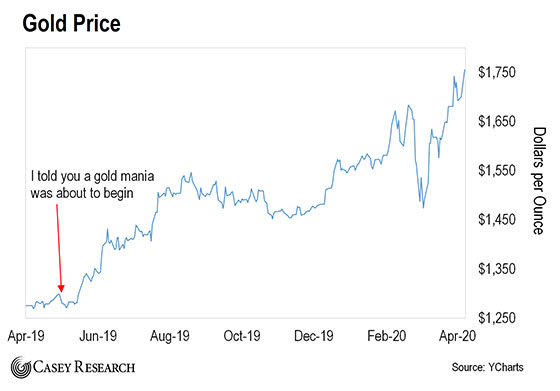 The trends that pushed gold higher last year are only getting stronger.

Governments are destroying their currencies at breakneck speed. Following the outbreak of the coronavirus, which popped the “everything bubble,” governments have thrown out the last semblance of fiscal and monetary sanity.

The U.S. federal government is bailing out just about everything – the airlines, the tourist industry, the shale-oil industry.

It’s even sending just about every citizen more than $1,000 each.

In a matter of days, central banks have fired up the printing presses and created more currency units out of thin air than they have for most of their existence. To call this reckless would be a severe understatement.

As governments race to destroy their currencies, it will only make gold more attractive. Have a look at this chart of the gold price this year plotted against the S&P 500… 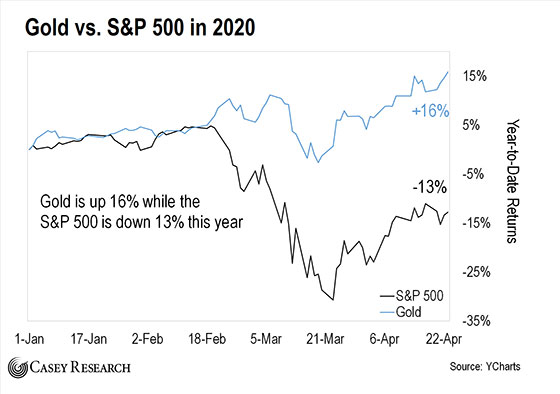 The bull market of 2008-2011 saw gold rise 166%. That could pale in comparison to what will happen with the unprecedented torrent of money printing global central banks are unleashing right now.

It is all pushing towards the ultimate end game – the re-monetization of gold.

We could easily see gold breach $5,000 an ounce. And that’s conservative.

This gold bull run will not only be a historic one. I think it will be the biggest bull run ever.

How to Play This Historic Gold Run

You may question why gold plays have underperformed gold over the past month. Others may wonder why the metal itself has whipsawed in price.

While it’s true that gold is a disaster hedge, it’s not always that simple.

The financial crisis in 2008 illustrates this point. It saw gold fall 31% with the overall market before bottoming out nine months later. The yellow metal then swiftly swung into a full-blown bull market, touching its 2011 high of around $1,900.

I expect this time to be no different. 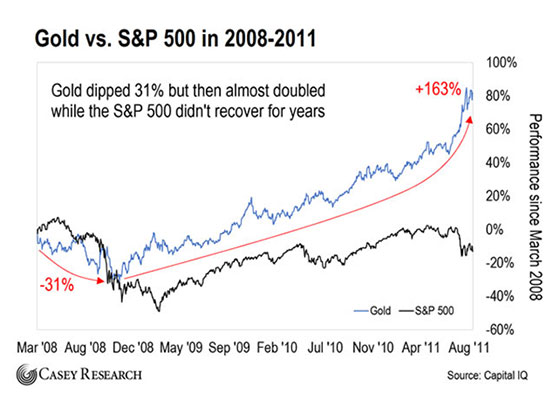 As for gold stocks’ relative underperformance versus the metal, gold miners as a group have trailed gold.

It shouldn’t be surprising. Gold mining stocks usually amplify the movements of gold. After all, their profits are highly leveraged to the gold price. That’s why we hold them in our portfolio.

Of course, unlike the physical metal, gold miners are real companies with flesh-and-blood employees. If the virus hits the miners and they can’t work, this could result in less gold extracted. Lower revenue and diminished earnings may follow.

But the sell-off in the gold space looks overdone. It’s the most significant opportunity I see at present. As gold continues to strengthen, I expect its price, and associated stocks, to go much, much higher from here.

In the meantime, I recommend that you continue to put your money in safe havens, like physical gold and the best precious metals stocks.

Editor’s note: If you don’t want to miss out on this historic gold bull market that Nick describes above, we urge you to check out our “Gold Investor’s Guide.” It’s our free primer on gold… and a great resource for readers who want to start building their exposure to the metal. Go here to check it out.