Gold has been a safe-haven asset and a hedge against crises for a long time. And it’s worked as a protective strategy for investors so far this year.

Gold is up 13% year-to-date, while a broad market index like the Dow Jones is down 8%. Plus, gold has outperformed blue-chip stocks by over 20% in 2020 – a stellar result.

This is great news for gold, but also for gold stocks, like miners, which can outperform the metal itself. As I’ve talked about before, that’s because they have what’s called “leverage” to the price of gold.

It’s true that gold’s had a bumpy ride so far. And with the COVID-19 pandemic affecting every area of the market, you may be asking whether gold will continue to rise. But if you take a look at gold miners, there’s a sign that this gold boom is just getting started…

When it comes to miners, there are two main types: seniors and juniors. Senior mining companies are larger, more profitable, and more established firms. On the other hand, juniors tend to work like early-stage startups. They often don’t even generate any revenue.

Instead, juniors attract capital, use it to reach the next milestone (like a successful drilling campaign), and then look for capital again. If they are lucky, the milestones they reach drive their share prices up. So they can raise money at a better price next time.

If a resource junior has the right amount of skill and luck to discover a deposit that looks valuable, larger companies take note. And if they think it’s a good fit for the rest of their portfolio of assets, they will buy either the asset or the company.

Since the COVID-19 pandemic started, these mergers and acquisitions (M&A) have stalled in most sectors. But not gold.

On March 23, Canada’s Endeavour Mining announced that it would combine with Semafo, another Canadian mining company, to create the largest gold producer in West Africa. The deal was valued at about $690 million.

Another major deal was announced in May. Alacer Gold, a Colorado-based mining company, agreed to merge with SSR Mining in a deal valued at $1.7 billion.

The timing of these deals is not random. These major mining companies expect gold’s price to continue to rise… and they’re preparing for it by making key acquisitions.

And here’s the thing: This acquisition wave can benefit shareholders, too…

Recently, there was a bidding war over a junior miner called Guyana Goldfields.

Guyana closed at C$0.42 on April 24. The next trading day, it announced an acquisition offer from Silvercorp, valuing it at C$0.60 per share. A counteroffer from another potential buyer followed on May 11. It valued Guyana at C$0.90 per share.

Keep in mind, we’re not recommending you go out and buy Guyana or Silvercorp. We’re just using the deal as an example.

Now, there’s still a possibility that the deal will fall through. That happens sometimes in the mining industry. But take a look at the chart below. 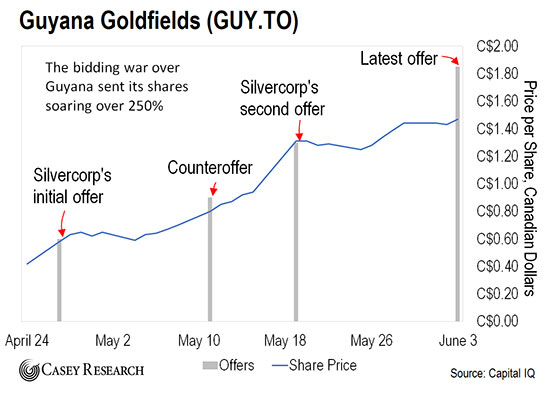 As the bidding war continued, Guyana’s share price rose with every new offer. All Guyana’s investors had to do was sit and watch as the value of their holdings soared. After the latest offer yesterday, Guyana closed at C$1.47.

Each offer told the market loud and clear: “There’s a buyer willing to pay this much for this company right now.” That decisiveness on the part of the buyer to spend real money on an asset is a powerful driver of the target’s share price.

Guyana’s shares soared by 254% between April 24, the day before the first offer was announced, and June 3. So if you had C$10,000 invested in Guyana before the bidding war started, your gain would be C$25,400. In the meantime, gold almost didn’t move during that period.

This upside came free. Guyana’s shareholders got it for being there earlier than the deep-pocketed “smart money.”

This is what I call “perfect leverage.” It’s extra return with no extra risk.

In other words, transactions like M&A are another way to get leverage to the price of gold and boost your returns.

Where to Go From Here

First, you should own some physical gold to get some exposure to this trend.

Second, as I told you above, a lot of the M&A activity in the mining industry happens among small- and medium-sized companies.

So you can take a look at an exchange-traded fund (ETF), like the VanEck Vectors Junior Gold Miners ETF (GDXJ), which includes companies that could be acquired.

But I also want to help you even more. So I found 13 gold companies with a market capitalization between $200 million and $500 million, whose shares trade in the U.S. or Canada.

These companies are also cash-flow positive. They generated positive free cash flow over the past 12 months.

(As a reminder, free cash flow is a profitability metric that is more conservative than net income. It can also be harder to achieve.)

Because they are so profitable, they could be the next acquisition target, like Guyana.

Of course, you should do your own research on any company before investing in it. And remember, speculating in the gold industry offers the chance at life-changing gains. But that doesn’t mean you should bet the farm on any trade. Always make sure to consider your risk, and position size appropriately.