Editor’s note: Increased fears the coronavirus will turn into a global pandemic sent markets deep into the red today. At writing, the S&P 500 was down 2.8% and tech-heavy Nasdaq plunged 3.1%.

However, if you’re a regular Dispatch reader… you’re already prepared.

We’ve been saying for months that gold would be a safe haven when volatility strikes. And today, it’s trading within a stone’s throw of $1,700 – a seven-year high.

(Catch up with E.B. Tucker’s thoughts on using gold to leverage your account against a crash… Nick Giambruno’s eight reasons to buy gold here and here… Dave Forest’s advice on how to use gold to secure gains… and Doug Casey’s asymmetric gold stocks bet here.)

But even when the market is going down like it is today, there’s one mistake you don’t want to make: Panic and trade in and out of stocks.

That’s the chief lesson from Casey Research friend Teeka Tiwari, who says if you find a profitable long-term trend, you should stick with it…

Here we are at the start of a brand-new decade…

But how do you ensure you’re drastically wealthier 10 years from now?

That’s why I’ve written this essay. To share what is probably the single most important investing lesson I’ve never revealed publicly before…

You see, every year, dozens (and sometimes even hundreds) of stocks double or triple.

But – in a given decade – one or two stand out…

Sadly, I missed out on both those investments…

I started working on Wall Street back in 1989. So the Circuit City story had already played out. And while I did buy in Dell in the ’90s, I made practically no money on it.

You see, back then, I thought I could make a lot more by trading in and out of the stock.

I believed Bill Gates when he said we’d eventually see “a computer in every household.” And I knew the internet was going to be big. So I got the stock right.

But because I had a “trader’s mentality” on the stock, I lost out on millions.

Now, there’s nothing wrong with being a trader sometimes. However, when you identify a truly remarkable “once-in-a-decade” investment, you ought to stick with it.

Yet if you’d just left that investment alone… you’d be sitting on $1.2 million today: 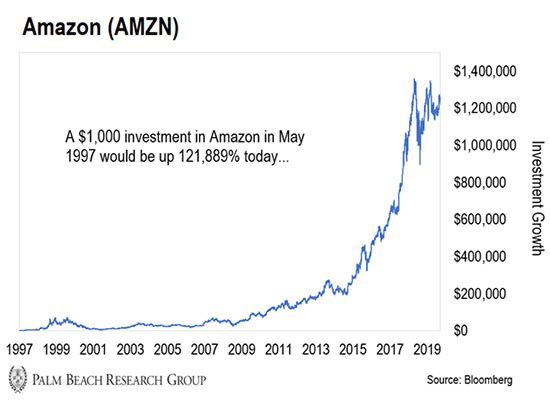 After Dell, I learned my mistake. And I’ve been fortunate enough to have picked the best investments of the last two decades.

And in 2016, I was among the first to recommend bitcoin, ether, and other cryptocurrencies to thousands of newsletter readers.

But I didn’t tell my readers to sell in and out every week.

Instead, I recommended my readers take profits on January 4, 2018 – three days before the big crypto crash. And the result was life-changing for many Palm Beach Letter subscribers…

And James, a struggling farmer, took “a few thousand dollars and turned it into $2.5 million”…

Just want to thank Teeka for all the time and effort he spends on this new asset class… I farm in Illinois, and it’s become difficult to carve out a profit. I’d been looking for a way I could still keep the farm going, while creating a new source of income…

I found my answer in a way I still have a difficult time believing. I’ve taken a few thousand dollars and turned it into $2.5 million, thanks to you. I’m sincerely grateful.

Stories like these are what motivate me. They’re what keep me going.

And I’ve now found what I believe will be the hands-down No. 1 investment for the 2020s…

Tech is hot right now. But it’s not 5G… artificial intelligence… or any of the “buzzwords” you’ve been hearing about so much lately.

This is destined to be much, much bigger.

In fact, according to the World Economic Forum, this tech should grow over 295,000% by 2027. And major companies like Google, Apple, Facebook, and others are all racing to get a piece of the action.

Now, I’ve just finished putting together a special presentation to reveal all my findings on this new investment.

I encourage you to access my free presentation today. You can watch it right here.

Editor’s note: It’s important to keep a clear head while everyone around you is panicking.

Remember: It’s safer to sit in stocks than try to trade in and out of them. Spread your bets… position size rationally… and never bet more money than you can afford to lose.