If you’ve tuned into the Dispatch before, you’ll know that we have two goals.

To achieve those goals, we turn to our in-house investing experts: Dave Forest, Nick Giambruno, and the founder of our business, Doug Casey.

It’s our job to showcase those themes, so you get the opportunity to profit from them.

But in today’s Dispatch, we have something a little different – a mailbag edition.

We’ve dug deep into the mailbag and pulled out a couple of insightful letters from Dispatch readers.

“Anything but sentiment makes no sense to me”

Before we show you the letters, and our response, if you’d like to comment (good or bad) on anything you read in the Dispatch… or if you’d like your editor or one of our experts to answer a question, just drop a line to [email protected].

Just remember that we can’t give personal investment advice.

Anyway, that’s the preamble. Let’s get on with the show. First up, a question from Dispatch reader, Janis B.:

I don’t usually write to you whether I agree or not, but this last one – two things that move the market – left me wondering how you came to your conclusion.

Everyone (most) loves the challenge of answering a question, but I don’t understand your answer. My first thought was – sentiment. Second thought was earnings or interest rates.

However, your answer only partially lined up. How is the Federal Reserve head stating that interest rates will rise anything but sentiment?

They didn’t rise. That is just market sentiment about what “might” happen. And there are a lot of things that can do that – even earnings now that I think more about it. In the long run that may end up being what moves the markets, but to attribute a short-term move to anything but sentiment makes no sense to me.

First of all, Janis, we’re glad that we’ve been able to spur you into finally writing to us.

To answer the question directly, we would argue that sentiment changed as a result of concerns about what could happen to interest rates or earnings.

The fact that the Federal Reserve didn’t change the rate, doesn’t mean that rates and earnings didn’t impact stock prices… if you get what we mean.

Without getting too philosophical, we would argue that sentiment changes when something in the person’s (investor’s) environment changes.

In this case, it seemed as though the Fed would change interest rates. That caused a change in investor sentiment. Then the Fed “kind of” hinted that interest rates wouldn’t change… yet. So sentiment changed again.

But it has to begin with a belief that interest rates or earnings will change. Sentiment reacts to that.

Of course, you could argue that it doesn’t really matter. The reaction by investors to a perceived change (or non-change), is so quick that it occurs almost at the same time.

But our point is that you should ignore the reasons you often see in the mainstream for why stocks will crash or soar. A war in the Middle East won’t affect stock prices, unless it affects earnings or interest rates.

A revolution in Eastern Europe won’t affect stock prices, unless it affects earnings or interest rates.

And a coup in South America won’t affect stock prices, unless it affects earnings or interest rates.

It’s true that the market occasionally has a knee-jerk reaction to these events. But it doesn’t last. Prices recover to their previous levels. That’s because those events don’t affect earnings or interest rates.

Agree or disagree with your editor or Janis B.? Send your message to [email protected].

“I enjoyed your article. Keep up the good work”

And now, a question from Thomas B.:

I’ve been reading your excellent articles on the oil comeback, and I’m glad that you are convinced that oil is going to stay strong. However, as a locomotive designer, I try to look down the track a ways, and so I would like to have you address the following:

I enjoyed your article. Keep up the good work. Best regards.

These are great questions, Thomas, and we doubt we’ll do them justice. But we’ll try our best. Whatever we don’t answer now, we’ll cover in future issues of the Dispatch.

First, remember that even though the U.S. and Europe effectively closed their economies for much of 2020… airline travel cratered… and road traffic slumped as people worked from home… worldwide oil demand fell less than 10% last year.

So we see zero threat to fossil fuel demand.

And as for road traffic fuel, it will exceed 2019’s number by next year. It will be 10% higher in 2022. You can see the forecast for this in the chart below: 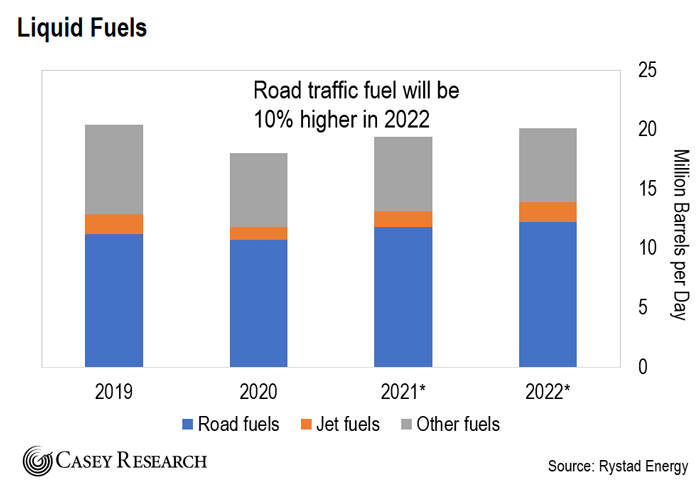 The facts appear to be that it’s too soon to write off the fossil fuel industry just yet.

Even if electric car sales increase, that just shifts the energy consumption from the internal combustion engine within the car, to the power station that distributes electricity to the grid.

As the following chart from the Energy Information Administration shows, it’s still likely to be a long, long time before the world weans itself off fossil fuels. 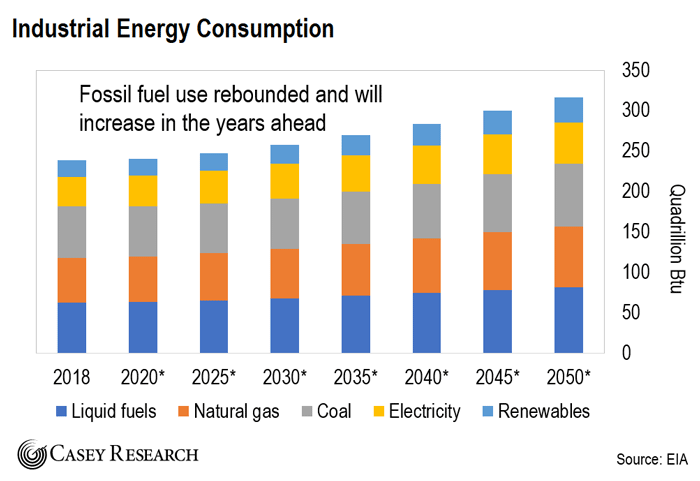 According to the chart, fossil fuels accounted for at least 75% of global industrial energy consumption in 2018. Just bear in mind that this chart was produced in 2019, so the data for 2020 isn’t accurate.

But we’ve seen from other sources that fossil fuel usage has already rebounded and will continue to increase in the years ahead. So the forecast for 2050 on this chart is likely to be somewhere near the mark.

The bottom line is that in the near-term at least, any shift to electric-powered vehicles will only result in increased fossil fuel demand at power stations.

Because despite advances in technology, and more diverse energy sources… coal, natural gas, and oil are still the most reliable fuels for electricity generation.

Of course, things can change. But we’ll continue to watch all this with keen interest. To be clear: we don’t have a philosophical hatred of green energy. We’re all for it.

But we like to see the free market decide when, what, and how new technologies take over from fossil fuels, rather than governments imposing their choice on the people.

What’s your take? Agree or disagree with your editor or Thomas B.? Let us know by sending a message to [email protected].