But since then, it’s been trading sideways. 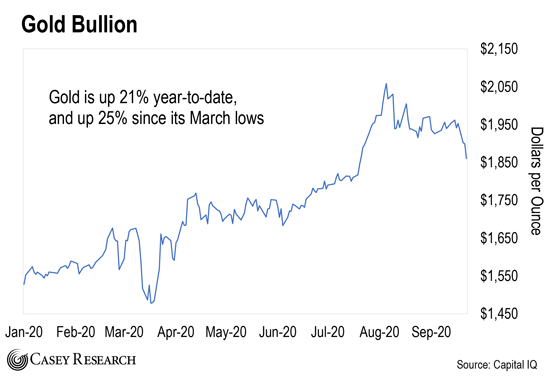 Some investors may be asking, “Is the rally over?”

The Gold Bull Is Poised To Continue

All of the factors that drove gold above $2,000 per ounce are still in full swing…

The economic fallout of COVID and the government stimulus… the historically low real interest rates… rampant money-printing… all of these factors are still at play.

So no, the gold rally isn’t over. It’s poised to continue…

But I won’t dwell on that, for now.

I’ll leave you with this example, though. Back in 2009–2011 – before gold set a historic price record – it corrected by 7% or more at least five times over three years. 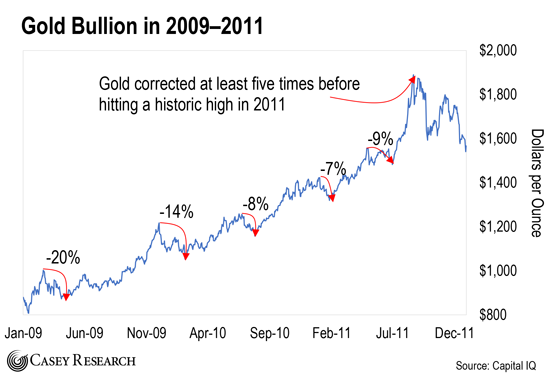 As Casey Report chief analyst Nick Giambruno often says, “nothing goes up in a straight line.”

Up until gold’s peak in 2011, it kept correcting. And often, it’s healthy to relieve that buying pressure.

But when a pullback like the one we’re seeing now happens, it’s a good idea to reflect.

More specifically, in times like these, it pays to add extra protection to your portfolio. And make sure that when it comes to gold, you’re not only exposed to the upside… but also have downside protection.

Where To Turn for Safety in Gold

If you’ve been following along with me here, you know I’m a big fan of gold miners. They offer upside leverage to the price of gold. And when gold moves an inch, gold miners can move a mile.

Here’s an example of what I mean.

Say it costs a mining company $1,700 per ounce to mine the gold.

That’s why we like gold miners. They offer explosive upside when gold prices go up.

But leverage goes both ways…

So you need to find companies whose costs are low enough to stay profitable… even if the price of gold corrects like it is today.

But it will continue making money.

Which will protect its share price and, if it pays dividends, allow it to continue to do so.

Of course, this example is simplified. The main point here is that some companies are better protected from gold price fluctuations than others.

That metric is the all-in sustaining cost, often shortened to AISC. It helps us gauge a mining company’s total costs, and its ability to weather fluctuations in the price of what it is mining… in this case, gold.

Generally speaking, the company with the lower AISC of $1,100 is a safer bet.

That’s because it offers greater upside if the price of gold rises… but won’t lose its shirt if gold declines. It will make less money, of course, but its bottom line will likely remain positive.

So gold miners with lower AISCs are usually better protected against movements in the gold price.

With this in mind, take a look at the table below.

It shows the five lowest-AISC gold miners with market capitalizations of $1 billion or more, based on their 2019 AISCs.

The miner with the highest AISC, Dundee’s $725 per ounce, is 61% below the current gold price. That means even if gold went below $1,000 – which I don’t think is likely – the company still wouldn’t lose any money mining the gold.

Costs can make or break a mining company. So you should look at them carefully.

And keep in mind, these companies should be used as a starting point for your own research.

You should always do your due diligence when investing in any stock, especially smaller, riskier ones (we call them speculations).

My colleague, chief analyst Nick Giambruno, also has a basket of gold mining companies in his Casey Report advisory (and some good information on why holding gold and gold stocks is essential).

However, if you would prefer a one-click way to invest in a diversified portfolio of gold miners, take a look at the VanEck Vectors Gold Miners ETF (GDX). It holds three of the lowest-AISC companies in the table above, and more.