The world changed forever 135 years ago.

That’s when the first car with an internal combustion engine (ICE) rolled off the conveyor belt.

Back in 1885, this was a major breakthrough – and not just for cars. Eventually, these engines were used in planes and boats as well, allowing people to travel millions of miles across the world.

But all these engines needed fuel to run. That fuel came in the form of oil… and the industry it spawned created a new generation of millionaires and billionaires.

Imagine investing in what’s now called ExxonMobil, right on the verge of this boom…

135 years later, we’re on the cusp of the next leap in technology… and the next opportunity to generate life-changing wealth.

This new tech is already on its way to replacing our cars today. And just like the internal combustion engine needed oil to function, it requires a specific resource that’s in limited supply.

And when investors catch on to just how crucial this new “tech fuel” is, its value will skyrocket.

I’ll tell you all about it today… but first, let me show you how this story already played out with oil…

There’s no question that oil was the most important commodity of the 20th century.

And of course, it allowed cars to become the most popular form of transport in the world.

Over the decades, as more and more cars rolled off assembly lines, they required massive amounts of fuel. In fact, today in the U.S., 45% of extracted crude oil gets turned into motor gasoline. Another 20% becomes diesel fuel and heating oil. In other words, the majority of raw oil goes into fuel of some kind. 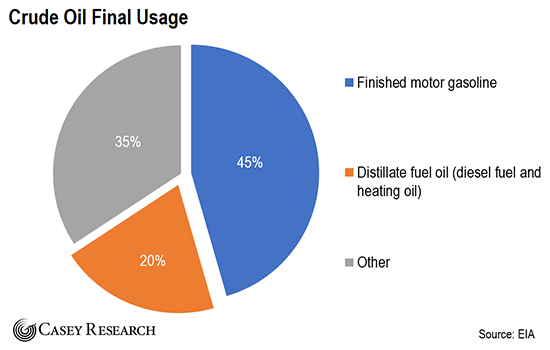 The oil industry continued to expand along with the automobile sector. The chart below shows how in the last 60 years, global oil production steadily grew alongside the number of cars. 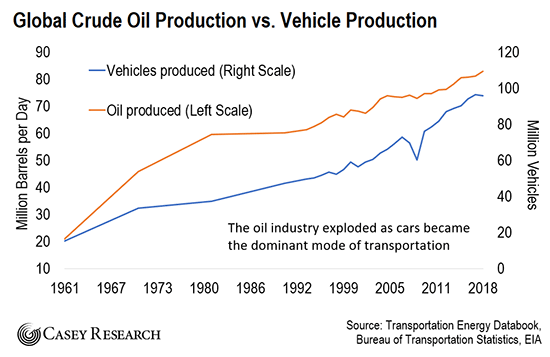 Last year, global crude oil output reached 82.3 million barrels of oil per day. At an average price of $64 per barrel, that equals more than $5.2 billion of oil produced every day. And over a single year, that makes it a $2 trillion market.

But here’s the thing: Another sector is going to overtake oil soon.

Of course, oil will continue to have a place in our world. But even before COVID-19, the oil market hit the skids.

Energy was the worst-performing sector on the S&P 500 for four of the last six years.

And we’re starting to see signs of oil’s decline elsewhere, too. The chart below shows how the number of active oil rigs around the world recently hit a multi-year low. That means oil production is in a dip… and it’s still falling. 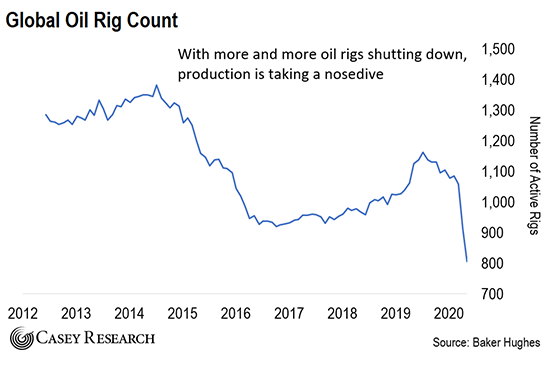 Instead, a new technology will dominate the next century… and the resource that powers it will mint new millionaires just like oil did.

This Trend Is Gaining Momentum

Electric vehicles (EVs) are on the rise. And according to some experts, this trend is unstoppable.

Companies like Tesla are leading the charge with their cutting-edge EVs. But even legacy car giants like Ford and General Motors are moving forward with their own plans for EVs.

Today, many EVs can drive the same distance as a regular car. And they’re starting to become affordable. In many countries, these battery-powered vehicles are even cheaper than regular cars due to state subsidies.

Take it from auto industry insider Al Bedwell, who said, “I’ve been looking at [electric cars] for 20 years and my real gut feeling is that it’s kind of unstoppable now.”

By 2035, analysts estimate it will reach 50.6%. Which means in 15 years, over half of the vehicles sold worldwide will not burn any fuel – they’ll run on a battery instead.

But just as a car with an ICE needs oil to function, electric cars need a different kind of fuel for their batteries.

And pretty soon, a large chunk of that $2 trillion in annual oil sales will end up in these commodities – including one crucial ingredient…

The “Tech Fuel” of the 21st Century

While EV batteries are made from a number of minerals, they rely on one critical metal – lithium.

This is why these batteries are called lithium-ion batteries, even though they have a number of other metals. The lithium is irreplaceable.

Of course, you won’t have to refill the lithium in your car like you refill gas. But remember, if electric cars make up half of all car sales, that’s about 58 million electric vehicles on the road in 15 years. And each EV will need about 59 kilograms of lithium carbonate per vehicle.

This is over 3.4 million tonnes of lithium – seven times more than the entire world produces today.

Already, carmakers are demanding more and more lithium every year. Which means that lithium miners are preparing to fire on all cylinders to meet demand.

Analysts estimate that there will be a lithium deficit in a couple of years due to increased demand. This will lead to growing lithium prices and a higher margin for lithium miners.

One way to gain exposure to this trend is through buying the Global X Lithium & Battery Tech ETF (LIT). It’s a convenient one-stop shopping tool that holds a number of lithium miners and battery producers.

As lithium demand grows and supply runs short, it should provide a solid return. But remember, don’t bet the farm on any trade. And never risk more than you can afford to lose.

P.S. While everyone’s trying to profit off the tech boom by buying up shares of tired, old Amazon or Tesla… we can leave them in the dust by tapping into what powers the tech boom…

I think it’s on the verge of a multibillion-dollar deal with Tesla that could happen any day – and send this company soaring.

You can’t afford to wait.

Check out this breaking news right now to find out how you could pocket a fortune in the months ahead.