I spent the past week at the world’s top gathering for hard assets.

PDAC is the premier spot for mining people to meet. From Australia, Ghana, and Peru… the world comes to Toronto to talk metals.

More than once, I’ve seen PDAC fistfights in hotel lobbies around town. It’s a spectacle.

During the day, the conference runs normal. Attendees circulate the show floor. They check out booths advertising companies developing lithium, copper, and gold.

In the late afternoon, things get colorful. Companies commonly rent bars, patios, and restaurants for lavish parties. From 2 p.m. to the wee morning hours, you can stumble from one party to the next.

We often joke that more business gets done at the parties than on the show floor.

There’s a grain of truth there.

I’ve seen million-dollar investment deals hashed out over beers on a bar top.

(That’s not unusual for the business. One of the biggest mergers and acquisitions – or M&A – deals I know in mining happened in a ski lodge over drinks. Totally true… although the principals would never admit it.)

It’s exhilarating, exhausting, and the absolute best place in the world to take the pulse of the commodities world.

In a word, mixed. And I think that’s a good thing for us as investors.

The week started with the markets crashing on Monday. A lot of stocks hit fresh lows.

That bled into the mood. A lot of pros I talked to lamented the state of the industry. They talked about stocks that formerly traded for dollars now reduced to pennies.

That’s certainly true in some cases. Several of the junior stocks in my Super Spike Advisory took a hit with the wider markets in recent weeks.

There wasn’t a lot of optimism at the show.

I consider that a very good thing for us.

Here’s the thing: Despite all the handwringing, commodities are doing extremely well.

Oil’s one of the year’s top performing investments. Gold is also beating nearly every other asset class.

To be sure, gold dropped in the last few weeks. But it’s down just 11% from its recent peak in March. Year-to-date, the safe-haven metal remains flat.

Compare that to the 29% loss in the Nasdaq this year. Or the 51% fall in bitcoin. 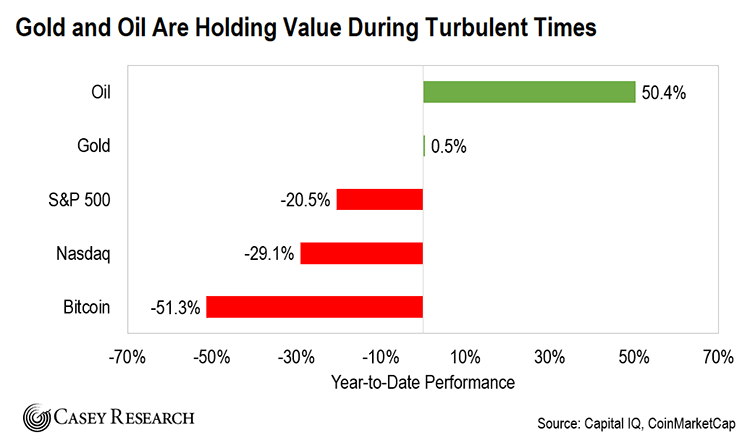 The fundamentals for gold companies are solid. Producers are making good profits. M&A is healthy and brisk – just this week, we got a $187 million buyout of Nevada gold developer Gold Standard Ventures.

At the same time, investors are throwing in the towel. The junior-mining heavy TSXV Index dropped 30% since the beginning of the year.

I love it when things set up like that…

This Is the Best Time to Buy

The absolute best opportunities come at times like this. When the fundamentals are measurably good, but the mood is subdued.

That’s when we can buy on the cheap. It’s trite but true… The most massive profits come when we’re buying during down markets.

What exactly should we be buying?

Battery metals look good. As I told you earlier this week, big deals are happening in that space.

At the same time, major investors like Goldman are abandoning the sector. That’s positive for regular investors. When massive buyers throw in the towel, it’s often a screaming buy signal.

I also like nickel a lot right now. That’s a metal hard to find anywhere on the planet. Yet, it’s so critical for the global electric vehicle (EV) buildout.

Remember, America has only one primary nickel mine. Just one.

Anyone who can come up with new sources for North America will do extremely well. At the PDAC, I heard about some fascinating new nickel projects. I’m chasing them down.

I also get a good feeling from silver. It’s just an inkling right now. But I can feel a glimmer of excitement around some of the silver stocks.

Valuations on silver juniors are some of the lowest in years.

That could change quickly. Remember, silver is a tech metal. It’s a key ingredient in solar panels.

I believe we’re still in the window where tech metals will spike. That could take silver up along with it, perhaps before gold.

But silver, gold, and other precious metals should also do well as the commodities bull market moves along. At the end of previous Super Spikes, precious metals were the biggest movers.

What else to report? There was a fair bit of talk about agricultural commodities. Potash seems to be in favor. That may be a spot to watch for more upcoming Super Spike gains.

I’m on my way back to my desk to dig in more. Stay tuned for more updates on all this and more as we continue following the Super Spike roadmap to profits.