This week at the Dispatch, I’ve been doing my annual prediction week. Longtime readers know that at Casey Research, we believe in getting the big picture right.

To round out my prediction week here at the Dispatch… we’ll cover two big commodities: gold and oil.

The gold market originally went as we expected in 2021.

We expected a pullback like that. However, we predicted gold would then shoot higher in the second half of the year.

It did rally to $1,900 in July. But since then, gold’s gone down – trading between $1,750 and $1,850 for the rest of the year. So while we were technically right that gold would be higher, we were wrong about the size of the move. 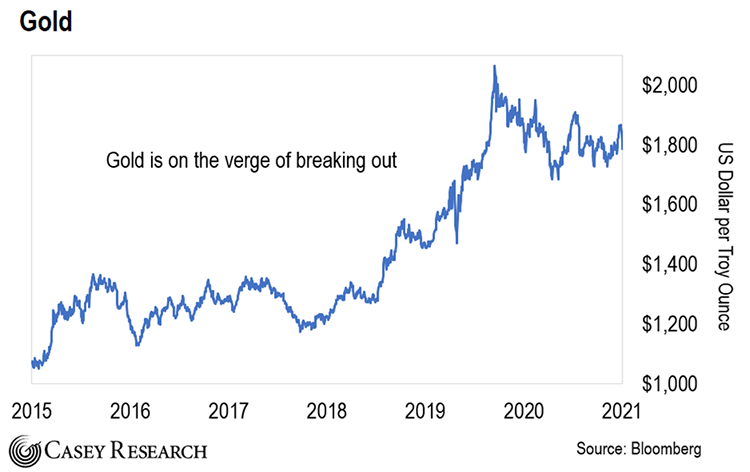 We’re surprised at this performance. Governments around the world are minting trillions of new dollars… most recently with the massive $1.2 trillion infrastructure spending bill.

Inflation is also raging. With all that happening, it’s a good time for gold. The price rose in recent weeks upon news of inflation.

The big drag on bullion has been a lack of uncertainty. The economy appears to be back on track. Good times are back, and there’s no need for gold as a hedge.

That’s far from the truth. We’re in the most uncertain financial environment in centuries. We’ve got unprecedented money creation. Central banks are still crushing interest rates to ridiculously low levels.

We suspect the euphoria’s going to wear off in 2022. Investors will realize a lot of questions remain about the economy and the monetary system.

Our call for $2,400 gold this year isn’t off the table. It’s just delayed. We believe the coming year will see bullion hit this level.

With gold subdued for the time being, it’s probably a great time to buy physical gold. Think of physical gold as a form of savings. It may not give you any yield, but it protects your purchasing power over time. It’s a true inflation hedge, and right now, inflation is at its highest level in 40 years.

While we view physical gold as a way to protect your overall wealth, gold stocks are a great way to play the yellow metal’s rising price. You can consider the VanEck Gold Miners ETF (GDX), which tracks the performance of a basket of major gold miners.

For the more speculative-minded, the VanEck Junior Gold Miners ETF (GDXJ) is another way to profit from the growth in gold. It tracks a basket of small gold mining and exploration companies.

We were right calling oil higher in 2021. But the size of the crude rally topped our expectations.

We called West Texas Intermediate crude at up to $60 per barrel this year. As we write, it’s trading above $75.

Why so high? After all, 2020 was the year crude prices went massively negative.

In recent weeks, options traders placed bets on $300 crude. That’s never happened before, not even when crude spiked to $140 back in 2008.

Oil investors are keying off government policy. President Biden has made several moves to limit or even ban oil drilling across America.

That’s negative for anyone trying to drill new fields. But big investors see it as a positive for companies with existing production.

The lack of drilling could trigger a supply shortage. That in turn could send oil prices soaring (like we’re already seeing).

In that case, existing oil producers will print money. Funds are positioning to take advantage of that coming windfall.

There’s a flood of investment hitting this sector. Government-ordered supply cuts are very likely for the coming year.

Between those two, we see crude higher in 2022. Prices above $100 are likely – and we could see a super-spike if any key oil nations like Russia or Saudi Arabia have problems. 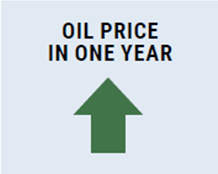 For most people, buying an ETF like the SPDR S&P Oil & Gas Exploration & Production ETF (XOP) may work just fine. In fact, while oil is up 48% this year, XOP is up 72%.