I believe in getting the big picture right. It’s one of the most important factors in investing.

That’s why at the end of each year, my team and I review our previous year’s predictions to see what we got right – and what we got wrong.

We use those moves to make predictions for different key markets in the coming year. (I covered some of these predictions in a three-part Dispatch prediction series on gold, energy, and the U.S. dollar.)

But there was some debate on our team on the direction of the stock market.

Last year, in our 2020 Prediction Issue of Strategic Investor, we called for the market to head higher. (Subscribers can review that here.)

The year started out as we expected… and then we got to March. Things looked bleak.

What we didn’t expect was the massive response by the Fed that dwarfed any stimulus from the past. That lit a fire under tech stocks, which surged to all-time highs. In fact, that propelled the entire market higher.

We don’t think it’s the end of the Fed’s candy giveaway. It’s too addictive. Once you go down that path, it’s hard to break the habit.

Today, it seems like a lot of investors fear a bear market is around the corner. People think it can’t keep going up. But we know even expensive things can get more expensive.

Something’s Better Than Nothing

Looking back on things, a correction is exactly what we had in March, with a 35% drop from the highs. But we didn’t enter a bear market. It was just a massive correction in the longest bull market in history.

Just take a look at the chart below. It shows the S&P 500 Index since the 2009 bottom with a long-term trend line underneath. By definition, bear markets usually come about after a 20% or more drop. We don’t think that’s the case anymore. What we should be paying attention to is the long-term trend.

When that trend line is broken decisively, then we’ll believe a new bear market is underway. 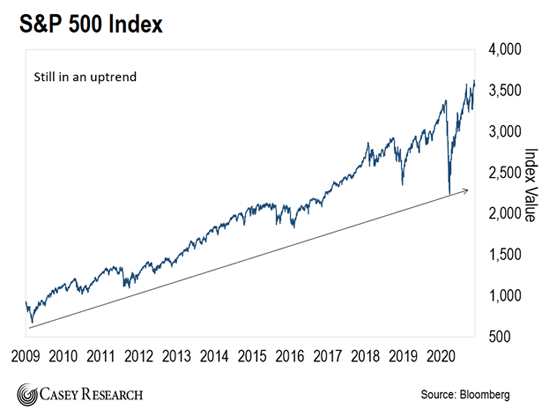 Meanwhile, with trillions of stimulus behind us and trillions more ahead, the Fed’s funny money will continue to prop up investing markets. That has massive implications for the universe of publicly traded companies.

That gives half as many places for investors to put their money to work. It’s part of the reason we’re seeing just a handful of companies dominate stock returns and indexes today.

With the number of companies trading going down, and the amount of money swirling around going up, we see the market going higher.

You can’t get a return holding cash. In fact, high-yield savings accounts top out around 0.5% today. At that rate, you might as well stuff your cash under your mattress.

There just aren’t many viable options to earn anything close to a real return. Even though we think that includes the stock market, we think investors will say “Something’s better than nothing.” 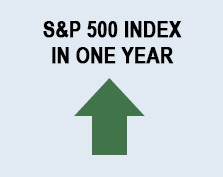 That said, stay alert. This is one of the most expensive markets in history. Things can change very fast. Especially if the Fed goes to rehab and reverses course.