The Vanguard Group has thrown in the towel on gold.

And that has massive implications for the gold market. But not in the way most investors think.

As you’re about to see, Vanguard’s decision could be extremely bullish for gold.

I’ll tell you why in a second—and why it’s presenting the perfect kind of opportunity we look for at Casey Research. But let me first give you some background.

• Vanguard is one of the world’s biggest money managers…

It oversees $5 trillion in assets. That makes it too big to ignore.

Last month, it made a major announcement. It said that it will change the name of its Vanguard Precious Metals and Mining Fund (VGPMX) to the Vanguard Global Capital Cycles Fund.

More importantly, Vanguard will change what the fund holds. It will go from having 80% of its assets in mining stocks to just 25%. It will achieve this by adding stocks from industries like telecommunications and utilities to the mix.

In other words, Vanguard is overhauling its precious metals fund…and changing it to a much more diversified fund.

Now, I realize this sounds like terrible news for gold. But it could be one of the biggest buy signals for gold in years.

More on that in a second. But let me first tell you why Vanguard did this.

• Gold is in a major slump…

The chart below says it all. 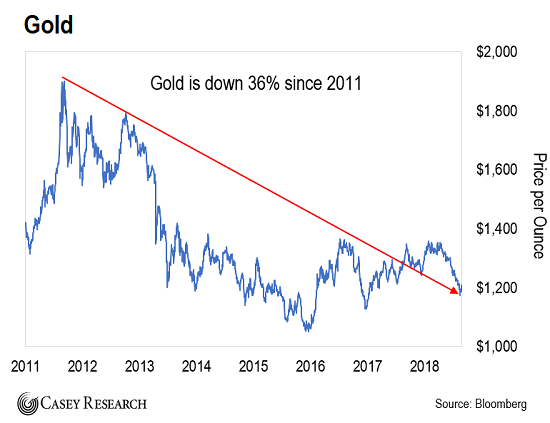 That’s a major decline. But many gold mining stocks have fared even worse over the last few years… And that has dragged down major gold funds like the one Vanguard runs.

Because of this, I imagine many Vanguard clients were fed up. So, Vanguard is completely overhauling its precious metals fund.

But if history’s any indication, this could be a sign that gold is close to a bottom. Let me explain…

• Vanguard has been down this road before…

It did so because gold had been an awful trade. It had fallen 15% over the previous five years. Sentiment toward the yellow metal was awful, just like it is today.

So, Vanguard dropped “gold” from its fund’s name. And you can see what happened. 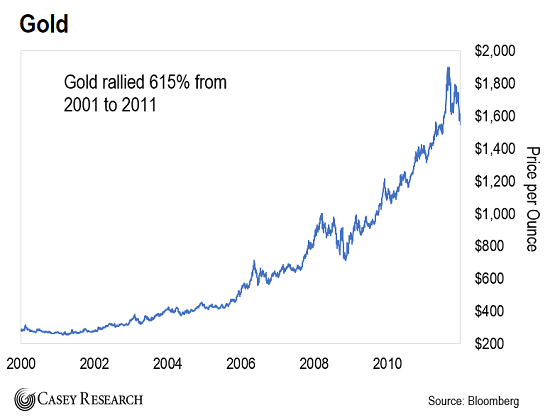 Gold went on to enjoy a decade-long bull market. It rallied 615% over the next 10 years.

Now, I can’t guarantee that the same thing will happen this time. But I will say this…

Big funds like Vanguard don’t make moves like this when gold is at record highs. They do this when sentiment is in the toilet.

And that can often be a sign that things can’t get any worse.

In fact, Vanguard changed its fund’s name in 2001 within a month of gold bottoming.

• Put another way, Vanguard’s decision could mean that gold is near “capitulation”…

Capitulation means “surrender.” In the financial markets, this happens when the last sellers sell.

And it’s usually characterized by panic selling, which is exactly what’s been happening with gold.

In fact, gold is down 8% since the start of the year. The average gold stock, on the other hand, is down about 20% on the year.

Vanguard’s decision could prove to be very bullish. But it’s certainly not the only reason to think gold is close to bottoming.

• Speculators have never hated gold more than they do right now…

We know this by looking at the Commitments of Traders (CoT) report.

This is a report issued by the US Commodity Futures Trading Commission (CFTC). It shows the positions major traders have taken in certain securities and commodities.

As of August 14, non-commercial traders—investors speculating on future price—were short (betting against) gold to the tune of 670 metric tonnes. According to market research team ANZ Research, that’s the biggest short position since the CFTC began collecting data in 1993.

Not only that, investors have a net short position for the first time since 2001. This means that the value of total short bets exceeds the total long (bullish) bets.

This tells us sentiment toward gold is extremely bearish.

When trades get extremely crowded, we like to take the opposite position. After all, buying an asset that other investors want nothing to do with is a proven way to make a ton of money.

Take it from Doug Casey:

You want to go where other people don’t go. That’s where you get the bargains.

Everybody knows the old expression “buy low, sell high.” Well, when are the prices absolutely the lowest? When everybody else is afraid of the situation and, as the original Baron Rothschild put it, “blood is running in the streets.”

• To take advantage of this big opportunity, I recommend betting on gold mining stocks…

The easiest way to do this is with a fund like the VanEck Vectors Gold Miners ETF (GDX).

But to make the biggest gains during the next gold bull market, you’ll need own the “best of breed” gold stocks.

Unfortunately, most investors can’t tell the difference between a world-class miner and a crummy one.

• That’s where we can help…

At Casey Research, we have teams of research analysts who scour the globe in search of the world’s best mining companies.

We even have an advisory dedicated to small mining stocks with massive upside potential called International Speculator. And editor Dave Forest has found the highest potential gold stocks today. They’re primed to rip higher when the gold market rebounds.

If you’re not a subscriber, you can sign up for Dave’s International Speculator letter—and see his newest money-making idea—by clicking here.

Today, a reader responds to our recent Conversations With Casey, “Doug Casey on Why Somalia Shouldn’t Have an Army”…

Due to the scandalous acts of some CEOs with taxpayer funds, Congress just passed Bill S.2155.

This bill has caused a domino effect in the markets that could mean thousands for investors—to the tune of $195 billion in “compensation checks.”

It’s a new income stream that just might cover your entire retirement. 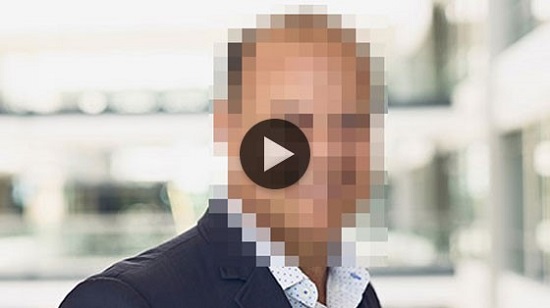