Bill Gates is all in on nuclear power.

Just look at what he told his 47 million Twitter followers on March 28. 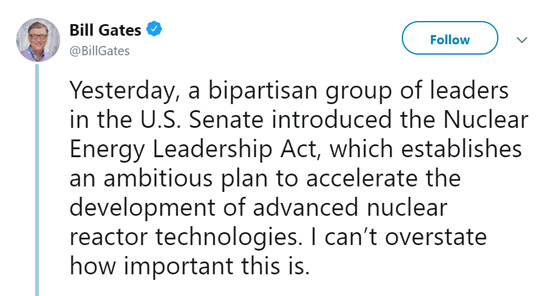 If you read Tuesday’s Dispatch, you know the Nuclear Energy Leadership Act (NELA) is a big deal.

It aims to “reestablish U.S. leadership in nuclear energy” and reduce carbon emissions. It also, as Gates noted, would accelerate development of advanced nuclear reactor technologies. 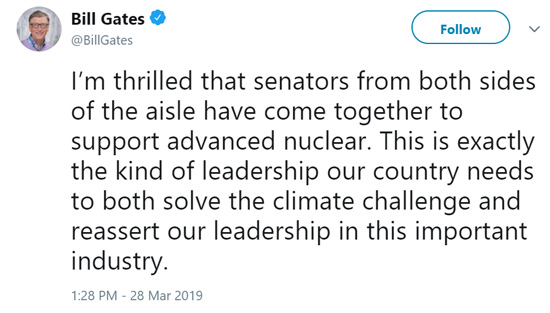 Not only that, he likes nuclear power for the same reasons we at Casey Research do. 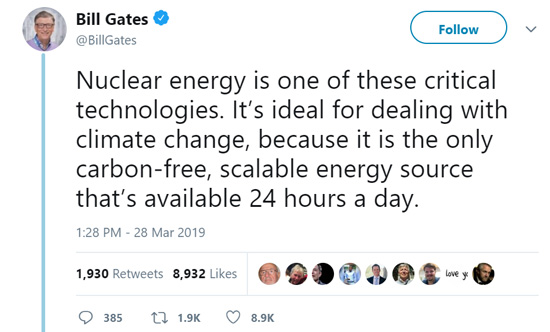 In short, Gates doesn’t think we can have a green economy without nuclear power.

It’s also worth mentioning that Gates is the Chairman of the Board for TerraPower, a leading nuclear innovation company.

• After all, Gates is the world’s second-wealthiest man…

He’s also one of the world’s most outspoken environmentalists. Last year, he helped launch the Global Commission on Adaptation, a commission focused on climate adaptation solutions.

Because of this, Gates’ opinion carries tremendous weight. It can both shape public opinion and guide policy at the highest levels of government.

I bring this up for a simple reason.

• Climate change is one of today’s hottest political issues…

Just look at how much attention the Green New Deal (GND) received. It’s all many politicians want to talk about.

Interestingly, the version of the GND that went before the Senate last month barely mentioned nuclear power… despite being one of the cleanest, cheapest, and most dependable forms of mass energy.

Of course, that version was steamrolled on the Senate floor… but as I explained Tuesday, concern over climate change isn’t going anywhere. And I believe we’ll see another version of the GND… one that doesn’t have nuclear power as a footnote, but rather as a focal point.

If that happens, uranium – the feedstock of nuclear power plants – should explode in value. Not only that, stocks leveraged to uranium could easily deliver returns in excess of 1,000%.

I’ll show you why in a second… and how to position yourself for this opportunity. But you should know something first…

According to our in-house commodities expert Dave Forest, Gates’ comments reflect a major change in perception toward nuclear power.

And Dave knows what he’s talking about.

He’s a true industry insider. He spent the last two decades of his career searching for new discoveries and breakthroughs in the resource space. He also founded his own mineral exploration and development companies.

And he believes the nuclear industry has reached an “inflection point,” saying:

Gates is quite correct that nuclear power is the world’s only non-carbon source of baseload power. It’s why Patrick Moore, an early member of Greenpeace, has been pro-nuclear for decades.

But despite obvious benefits, nuclear power has stalled since its initial buildout during the late 1960s and 1970s.

So, the recent groundswell of nuclear support is interesting. Perhaps Fukushima demonstrated for people like Bill Gates that even a worst-case scenario isn’t that bad – especially weighed against the perceived threat of climate change and the real threat of massive pollution from coal.

Whatever the case, public opinion is a powerful factor in driving policy. And it looks like the world is going to push its leaders to re-embrace nuclear as a climate solution.

In short, we’ve seen a complete 180 in public perception of nuclear power recently.

That alone should get you excited about uranium. But it’s not the only reason to be bullish.

In fact, Dave says an even bigger announcement was made just one week after NELA was introduced:

This would be the first approval of new reactors in China in three years – and Liu’s comments suggest building is going to restart imminently.

This is hugely bullish for uranium producers. More from Dave:

China is the biggest driver of global reactor buildouts this decade.

Chinese-installed nuclear capacity has increased more than 20-fold since 1990.

China’s reactor builds are the biggest factor affecting global uranium demand. Even with the slowdown in reactor construction recently, Chinese projects still account for 25% of the nuclear capacity being built worldwide.

China has lots of nuclear projects it could choose to activate. Planned and proposed projects across the country would add 162,476 megawatts electric of capacity. That would triple China’s overall nuclear generation.

• This is all great news for speculators…

Public perception towards nuclear power has suddenly turned positive. At the same time, uranium demand is set to soar.

This is a recipe for much higher prices.

Remember, uranium stocks are some of the most explosive on the planet – when they move, they really move.

But even blue-chip uranium stocks delivered monster returns during the last bull market. Take Cameco – the world’s largest publicly traded uranium company. It surged more than 3,395% from 2000 to 2007.

I say this because the sector’s been absolutely decimated.

According to Forbes, there were 450-plus companies in the uranium space prior to Fukushima. And the market capitalization of publicly traded uranium stocks was approximately $130 billion.

Today, there are about 40 uranium companies worldwide… with a combined market value of only about $10 billion.

In other words, it wouldn’t take much money to move the uranium market.

So consider speculating on uranium stocks if you haven’t yet.

But remember, uranium stocks can be incredibly volatile. Never bet more money than you can afford to lose. Position-size appropriately. Do your research and take profits as they come. It only takes a small amount to capitalize on the next bull market.

P.S. International Speculator editor Dave Forest is one of the most well-connected, experienced resource speculators on the planet. He’s a true industry insider with 20-plus years’ experience in this space… and has built his readers a portfolio to profit from the coming bull market in uranium.

Dave says a radical new technology is about to take down the world’s leader of electric vehicles… and send a specific metal soaring in the process. Not only that, it will flood one tiny, specific stock with a massive windfall starting any day now. Go here to get all the details.

Do you believe a "nuclear renaissance" is underway? If so, are you positioned to profit? Let us know at [email protected].

Last night, Casey Research friend and Wall Street insider Jason Bodner revealed the secrets behind his revolutionary trading system… a system that consistently spots the market’s fastest-growing stocks up to 30 days in advance.

If you missed it, you’re in luck.

You still have the chance to claim Jason’s No. 1 recommendation. The potential returns could be enormous – as much as $9,385 in one trading day. So for a limited time, you can learn how to profit from his system by going right here to watch the replay of the event… 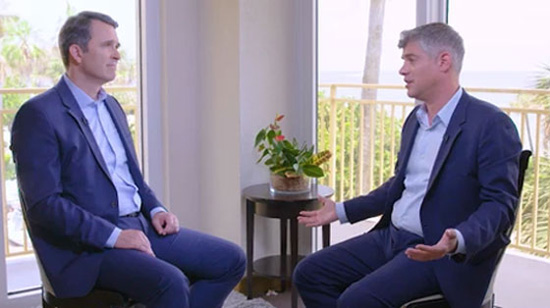