Editor’s note: In the middle of a crisis, it’s important to stay calm and rational… especially when it comes to protecting your wealth.

That’s why today, we’re handing the reins to Casey Research’s Andrey Dashkov. Andrey’s a chartered financial analyst who’s worked behind the scenes at Casey Research for 10 years. He learned from the best investing minds we have to offer, like Nick Giambruno, Louis James, and Doug Casey.

But Andrey has also lived through crisis after crisis, like the collapse of his home country Belarus… or the recession in 2008 (you can catch up on his full story here.) That led him to develop methods to keep your wealth safe through volatile markets, like the one we’re seeing today.

Below, Andrey shares one of his essential strategies: how to guard your portfolio against “junk dividends”…

It’s a tough time to be an income investor.

The COVID-19 crisis led the Federal Reserve to push interest rates to their lowest levels in a decade… which means one of the top sources for passive investing income, U.S. Treasurys, aren’t paying much anymore.

Right now, it’s impossible to get any sizable income out of bonds. Even 10-year Treasurys pay less than 1%. That’s four times less than they paid back in 2010.

So it’s no surprise that plenty of investors are looking to stocks that can provide passive income – in the form of dividends.

After all, if you look for the ones with the highest dividend yields (the amount paid in dividends over a year divided by the current share price), you’ll find plenty of stocks that pay more than bonds right now.

But you have to be careful…

Take Tupperware Brands (TUP), for example. At the end of October 2019, it was in relatively good shape, and it had a dividend yield of 11%.

You read that right. That means that if you had invested $100,000 into Tupperware at that time, you could earn $11,000 a year just off its dividend alone. Not bad at all.

Except, that’s not how it’s working out for Tupperware investors. Take a look at how the company has fared since… 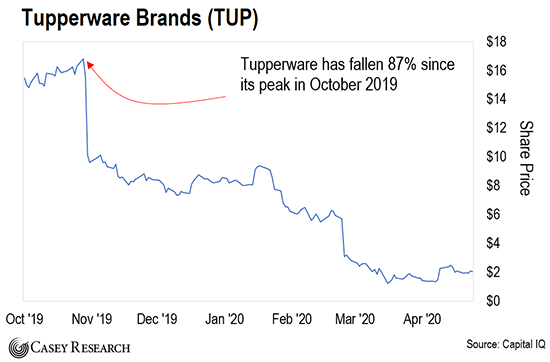 Since October 2019, the stock has plunged 87%. And one of the catalysts for that decline was its high dividend.

With volatility rattling the markets, it’s a good idea to look for dividend-paying stocks right now. But there are plenty of landmines like Tupperware out there…

So today, I’ll show you how smart investors saw that Tupperware’s dividend led to its decline… and how you can find the right dividend stocks for your portfolio…

“Junk Dividends” Can Tank Your Portfolio

You may have heard about “junk bonds.” They pay very high interest – but there’s a catch. They are so risky, there’s no guarantee you’ll get your principal back.

The same applies to stocks and their dividends. The stocks paying the highest dividends are often riskier than the ones paying less.

Like I said above, it was having a great 2019. And then, on November 8, it suspended its dividend. No reasons were given, but management said that it needed to “improve financial flexibility.”

And, as the company’s dividend yield went from 11% to zero, its share price dived.

This wasn’t due to any deeper problems with the company. Tupperware isn’t some fly-by-night operator. It’s been around for ages. Its product is everywhere.

This is what happened to Tupperware. But there were signs that this was coming…

Here’s how to spot a “junk dividend” stock:

They are companies with high dividends that can’t afford them.

Similarly, if a company has a net income of $1 billion and spends $2 billion on dividends, it’ll be in trouble soon.

With Tupperware, its net income was enough to cover its dividends for most of the past decade.

But in 2017, things went off the rails. See for yourself. 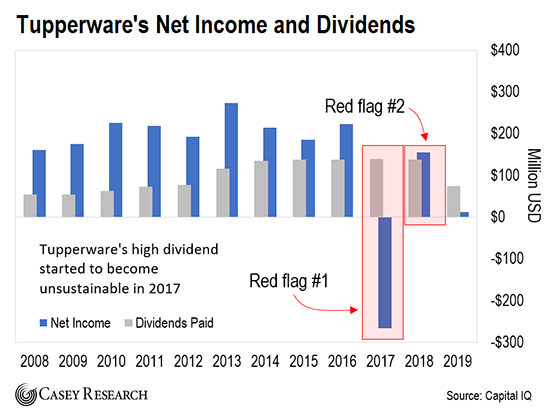 In 2017, Tupperware paid almost $140 million in dividends even though it lost about $265 million that year. That was red flag number one.

Then, the following year its net income could barely cover the amount it paid in dividends.

In 2019, it failed to make enough money to cover its dividends again. So by the end of the year, Tupperware suspended them.

But smart investors saw trouble brewing for a long time. It took just a quick look under the hood to realize what was going on.

This is what I mean when I talk about “junk dividends.” Like “junk bonds,” they are too risky.

Not only can you lose the dividend, but you can also see your total position sink.

How to Avoid “Junk Dividends”

Tupperware isn’t the only case of a company overpaying its stockholders.

I’ve run the numbers on some of the most popular market indexes and determined that a company that pays more than 7% in dividends can’t afford it, on average.

A yield higher than 7% is a cause for concern, not celebration. That doesn’t mean that each company paying more than 7% will tank… but it’s worth taking a second glance at its financials.

Instead of looking for dubious income, rely on stocks with yields under 7%… and with net income that comfortably exceeds their dividend payouts.

The ProShares S&P 500 Dividend Aristocrats ETF (NOBL) is an excellent place to start looking for these companies.

But I want to make your job even easier…

I’ve put together a table of stocks with dividend payouts higher than their net income, like Tupperware’s in 2019. You should be skeptical of these companies and their high yields.

Again, it’s important to do your own research on a company before investing in it. And don’t bet the farm on a single trade.

There’s no easy way to make money in the market. You need to have rules of thumb to help you. I hope my 7% dividend rule helps.

P.S. Dividends are a smart way to keep growing your wealth in this volatile market. But after the recent crash, it’s understandable if you’re afraid of stocks right now.

However, there’s a method to grow your wealth WITHOUT owning stocks… and it involves the coming gold bull market.

They’re called “Gold Placements.” And no one knows more about them than Strategic Trader editor E.B. Tucker. He’s seen them deliver gains you rarely see with stocks… returns like 5,509% and 6,200%.

They have nothing to do with bonds, ETFs, options, futures, or cryptos… but they can be bought easily through any broker.

He explains it all in this special online presentation. Go here to watch it now.

Like what you’re reading? Send your thoughts to [email protected].