Every December, we make predictions for different key markets and economic indicators for the coming year. We also like to review our previous year’s predictions to see what we got right and what we got wrong.

Keep in mind, we don’t care about the exact price of these markets. Trying to determine an exact price is useless. Anyone that tells you otherwise is just seeking attention.

The point isn’t to get the price right. It’s getting the direction of the move right.

We Got This One Right

Last year, we predicted that interest rates would rise. (Current Strategic Investor subscribers can catch up here.) We measured this by tracking the benchmark 10-year Treasury yield.

This may seem counterintuitive given the multitrillion-dollar government spending spree. As we’ve said before, it doesn’t matter who is in power. Politicians like to spend money.

In fact, we’ve said for years the U.S. government debt load just about doubles under each two-term president. Under Reagan, the debt grew 185%. Under George W. Bush, it grew 93%. Under Obama, it grew 78%. George H.W. Bush and Bill Clinton together sent it up 111% over a combined 12 years.

Now with Biden holding the purse strings, in just one year, the debt is up another $2 trillion. That doesn’t include the recently passed $1.2 trillion infrastructure bill. 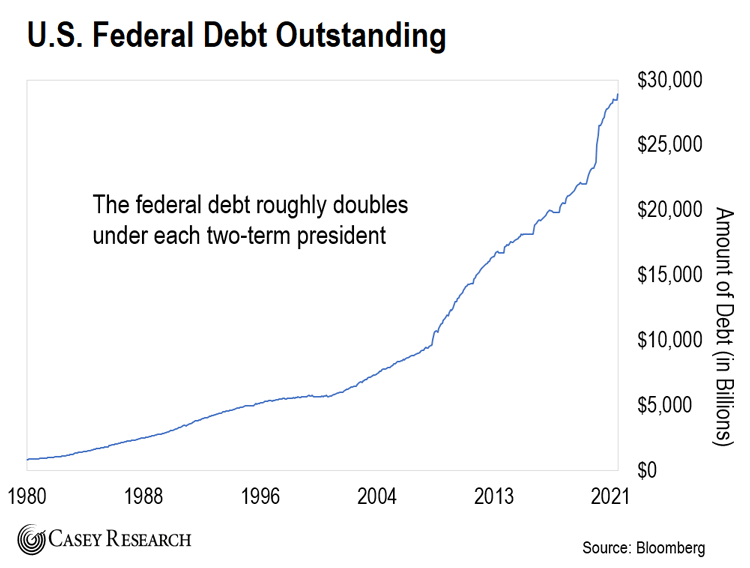 Keep in mind, Biden’s $1.75 trillion “Build Back Better” plan is still floating around the halls of Congress. Add in the trillions more in proposed infrastructure spending and he may prove to shatter records over a four-year period.

However, even with all this spending, interest rates are still subject to the whims of the open market. The Federal Reserve may be able to control the overnight lending rate – the Fed Funds Rate, or what banks charge one another for overnight loans – but they can’t control long-term interest rates with current policies.

Last year, we called for higher interest rates and were spot on. This year, we’re predicting more of the same.

Our call for interest rates in 2022 is higher. 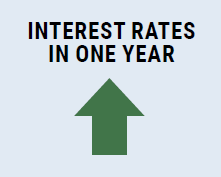 Again, it seems counterintuitive when we think there’s much more debt on the way. But market forces are saying rates want to head higher even if the Fed and the White House want them to stay low.

Don’t mistake this as what we see in the long run for rates. We don’t think the Fed will allow interest rates to head too high.

That’s because at some point, the Fed may implement yield curve control (YCC). That’s when they target a set rate for different maturities of debt – like the five-year or 10-year bonds – and buy enough bonds to hit that rate.

The last time this happened was during World War II. In April 1942, the Fed capped yields of short- and long-term bonds to help keep borrowing costs low. The more debt the country demanded, the more bonds the Fed bought.

After the war, the Fed wanted to reverse course despite objections from President Harry Truman. Finally, in 1947 with inflation raging at 17%, the Fed ended rate caps.

While we’re not in a major war today, if we see YCC, all bets are off. The market will have no say in what happens at that point.

How to Beat the Government at Its Own Game

For a long time, U.S. Treasury bonds offered a safe way to earn a decent yield on your idle cash. In 1995, you could have bought bonds yielding 7.5%.

That seems unthinkable in today’s world. With savings accounts from major banks paying 0.2% or less and long-term government bonds like the 10-year bonds yielding around 1.5%, you’re lucky to find anything more than that.

But sometimes the government accidentally does something to help savers.

That’s the case with one government bond that’s paying 7.12% today. With inflation hitting 6.2% last month, that’s enough to at least help you keep your hard-earned dollars from eroding… for now.

The bond we’re talking about is the Series I Savings Bond. It’s an inflation protected bond that resets its interest rate every May and November, depending on the rate of inflation at the time. It’s also exempt from state and local tax.

You can buy these bonds directly from the U.S. Treasury at TreasuryDirect.gov.

It’s easy to set up an account and buy these bonds.

The downside is you can only buy $10,000 worth per year per person. (Or up to $15,000 if you elect to use $5,000 of your income-tax refund to invest in these bonds.) Additionally, you can’t withdraw any money for at least 12 months. And if you take money out before a period of five years, you forfeit 90 days of interest (which isn’t much of a penalty).

And after five years, there is no penalty.

If you have unused cash sitting around that you don’t need and isn’t for an emergency fund, these bonds may be a great alternative to your typical savings account.