Rachel’s note: Seeing your portfolio drown in a sea of red is never comfortable… even if it’s only temporary.

And he says if you want to emerge on the other side of this cyclical bear market richer and not poorer, you need to prepare for more discomfort.

Instead of exiting stocks… you buy world-class assets for cheap, knowing the long-term bull market will resume within a year or so.

That’s why next Wednesday, July 20, at 8 p.m. ET, Teeka’s holding a free urgent event to explain where you should be looking… and how you can make crypto-like gains from boring blue-chip stocks in today’s market.

Sign up for free here. Then, read on for more about recapturing any gains you’ve lost in the market this year… and positioning yourself to make much more.

I like to think what separates me from other newsletter editors is that I tell you what you need to hear instead of what you want to hear.

For instance, at the start of the year, when many gurus were telling you tech stocks would continue to go to the moon… I warned that this would be a bad year for stocks.

Here’s what I wrote in February:

A “cyclical” market is different from a “secular” market.

Secular markets are long-term “one-way” directional moves that last between 12 and 20 years.

Within these secular markets, we also have shorter “cyclical” markets.

They can last from a few months to a few years. So, they’re temporary sell-offs… but they’re still painful.

Right now, I believe we’re in a cyclical bear market. And the hard truth is that this sell-off isn’t over.

I’m telling you this because I’m confident you can handle the truth.

At the same time, my brutal honesty might make you uncomfortable. I understand this…

Seeing your portfolio drown in a sea of red is never comfortable… even if it’s only temporary.

But if you’ve been a long-time reader, you know my job isn’t to make you comfortable. It’s to help improve your financial life.

If you want to emerge on the other side of this cyclical bear market richer and not poorer, you need to prepare for more discomfort.

My Playbook for This Bear Market

Some of you may be thinking, “Hey, Teeka, riding out this volatility is easier said than done.”

I can’t blame you for that.

But I’ve been in stocks since I was a kid in 1982 and as a professional since 1989. So I’ve seen plenty of wild rides throughout my nearly four decades covering the markets.

My experience has taught me it’s important to distinguish between cyclical and secular markets.

The nature of the crisis determines how you should respond… And how you respond determines whether you make or lose money once the turbulent times pass.

Let me show you what I mean…

The Great Recession was a prolonged bear market that saw U.S. stocks crash more than 50%. It was the biggest crash since the Great Depression.

It wouldn’t recover its all-time high until April 2013… So it took the market over five long years to climb out of the valley of despair and back to its previous highs. That’s the very definition of a secular bear market. 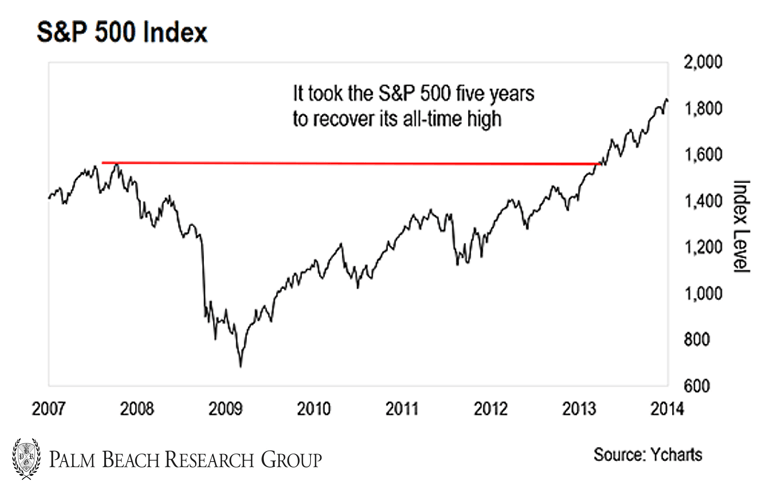 During a prolonged market crash like this, the prudent thing to do is either exit stocks or have protective hedges in place like “married” put options that act as insurance against a drop in value.

But during short-term cyclical bear markets, you need a different strategy.

Instead of exiting stocks… you buy world-class assets for cheap, knowing the long-term bull market will resume within a year or so. 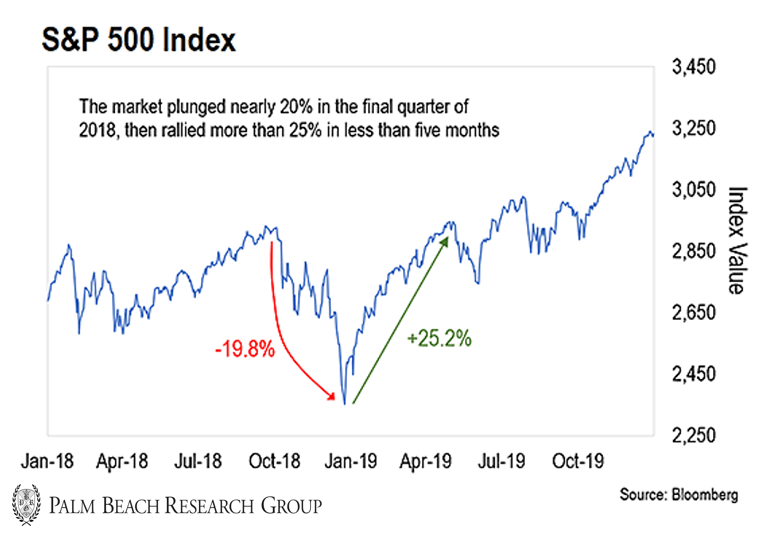 As you can see, the market rebounded in less than five months… and went on to rally to new highs.

But world-class stocks did better. 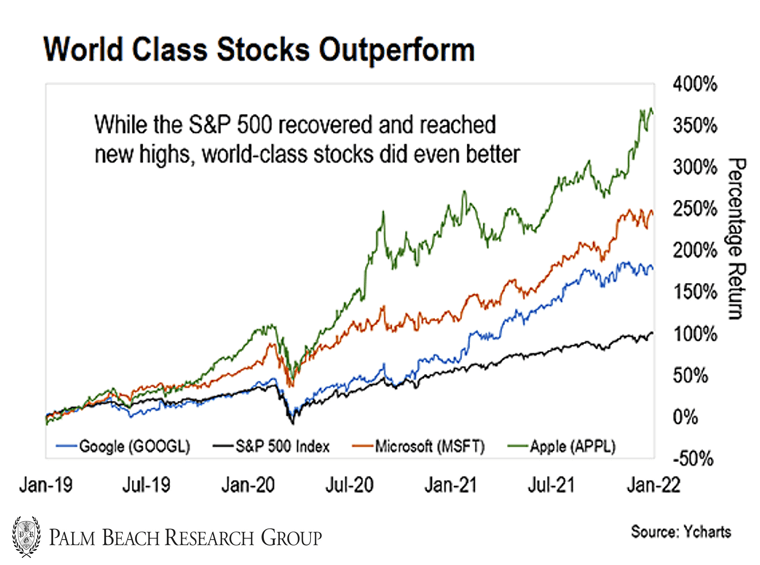 Bottom line: there are different playbooks for different types of markets.

Right now, the playbook I’m using says to buy world-class assets on the cheap and let time do the heavy lifting.

You Need Brutal Honesty to Make Money in the Markets

I know my brutal honesty can sometimes come across as tone-deaf.

I have many millions of my own dollars in the market. So I can assure you I am not tone-deaf to the current carnage.

The key to the relationship I have with you is respect. I respect you enough to treat you as an adult… not as a child.

If you have bad news, you don’t sit your 5-year-old down and tell them, “Hey, buddy, daddy just lost his job. We can’t make the house payment this month.”

You shelter children from bad news like that. Not adults.

And the bad news is I think this market weakness will continue a bit longer.

Based on the charts I’m looking at, we could see the S&P 500 drop another 30% from here. Even bitcoin could even see another 30% leg down.

So why don’t we just sell and buy back in later?

Because I might be wrong on another leg lower.

This is a cyclical bear market, not a long, drawn-out secular one. A few pieces of good news could have this market ripping higher.

The risk of missing that move up is far more dangerous to your wealth than enduring another few percentage points of short-term downside.

Long story short: this sell-off is temporary. The sun will shine again, and I expect the market to close flat for the year and power higher from 2023 and beyond.

Right now, the key thing to do is filter out the negative news in the media and start putting new money to work at these lower valuations. You need the courage to buy world-class companies that are getting the tar kicked out of them.

That’s why next Wednesday, July 20, at 8 p.m. ET, I’m holding a free urgent event to explain where you should be looking… and how you can make crypto-like gains from boring blue-chip stocks in today’s market.

You see, despite record-high inflation and a painful market pullback, there’s a catalyst on the horizon that could return 21 years of S&P 500 returns in as little as 12 weeks – all from blue chips – and it could begin as soon as this month.

It’s a rare opportunity to recapture any gains you’ve lost in the market this year… and position yourself to make much more.

But you need to act now… because this opportunity could be gone before the end of the month.

Friends, I know it’s uncomfortable. But you must change the way you view a cyclical bear market.

If you can do that, you’ll set yourself up to make a ton of money when the next up cycle begins.

So click here to reserve your spot for my July 20 event… and if you show up to watch, you’ll even get a free list of stocks to play this catalyst.