“I think we now understand better… how little we understand about inflation.”

So said the 16th head of the U.S. Federal Reserve at a recent conference in Sintra, Portugal. One Jerome Powell.

This is no small admission. The Federal Reserve is supposed to understand how to control prices. It’s one of two mandates, along with employment.

So when the Chairman confesses that the Fed never saw it coming, it’s an eye-opening statement. But it’s not just Jerome Powell at fault. He followed that up with this admission:

This was unpredicted. I was looking at the time of our June meeting from one year ago. Of the 35 people who filed, with the survey of professional forecasters, 34 of them had inflation below four percent for the last year. And, of course, [this year] it was way above four percent

Thirty-four out of 35 professional forecasters at the Fed couldn’t figure it out. The very people tasked with predicting inflation got it horribly wrong. And now the economy – and your hard-earned savings – are suffering for it.

As I write, the S&P 500 is off to its worst start in 50 years. Inflation is raging to the tune of 8.6%. There’s pain at the pump with average gas prices hitting over $5 per gallon on average. And food prices keep rising.

If the forecasters at the Fed can’t get it right, nor the over-400 PhD level economists working with them, surely no one could, right?

What Jay Powell and his army of economists couldn’t predict, we saw coming miles away.

Here at Casey Research, we pride ourselves in getting the big picture right. After all, if you have an idea of where things are going, it gives you the chance to profit from a trend… or avoid a disaster.

The same is true with investing. Playing where the puck is going to be can make a world of difference for your portfolio.

For instance, last year we told readers to expect higher oil prices. To say it’s outperforming our expectations would be an understatement. 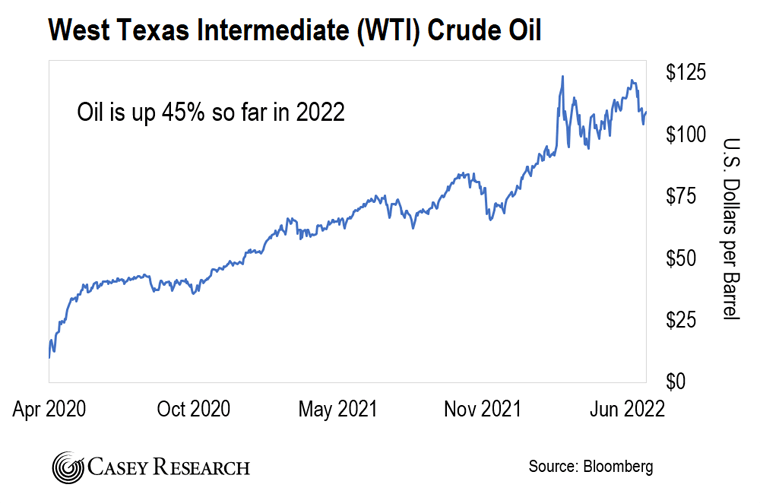 However, our reasons for that prediction are playing out close to expectations. That’s because we told readers oil investors are keying off government policy. President Biden made several moves to limit or even ban oil drilling across America.

That’s negative for anyone trying to drill new fields. That also gives companies with existing production an advantage.

In fact, we said the lack of drilling could trigger a supply shortage and that it would send oil prices soaring – forcing existing oil producers to print money.

That’s all playing out today.

You see, energy is life. And oil is one of the cheapest, most abundant sources of energy we have.

We need it for everything we do.

So when the price of oil heads higher, so does everything else.

But the price of oil isn’t the only thing contributing to inflation. That’s only one part of the equation.

It’s also the Fed’s very policies and the unchecked spending by the government of the last two years that’s putting it over the top.

The very definition of inflation is an increase in the money supply. So when we print more dollars, they’re worth less than before. It’s a silent tax on the majority of people. 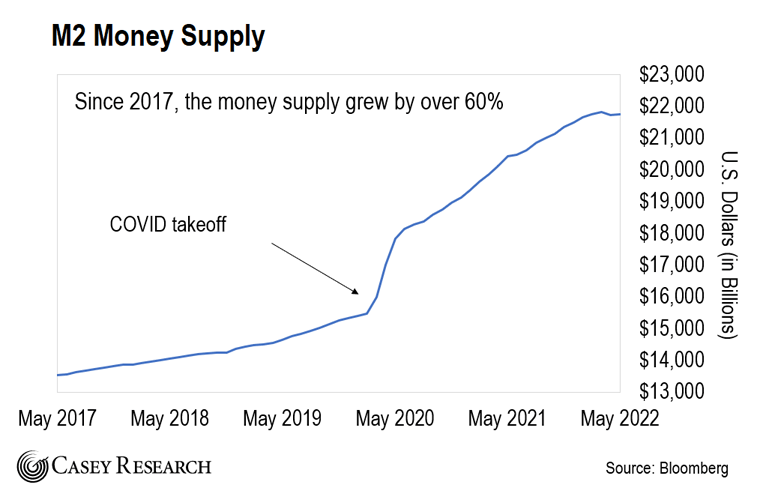 As you can see, the last two years are an anomaly. It was an almost vertical takeoff in the money supply due to COVID-related spending programs.

When you shove trillions of dollars into the system in a matter of months, it’s not hard to figure out what comes next.

It all eventually shows up in the form of rising prices. The higher the chart above goes, the more prices will rise. The faster it goes, the faster prices rise.

It doesn’t take much to see that… unless you work as a professional forecaster at the Fed.

Where the Fed went wrong is anyone’s guess. For my money, they probably failed to understand the connection between the money supply and inflation.

And they almost certainly failed to make the connection between rising energy prices and how that would affect everyday goods.

Where we go from here is still up in the air. But at least the people who helped create the problem have finally admitted they don’t understand it.

What to do about it is a different story.

Fixing this mess will be hard. The bad news is your wealth may continue taking a hit until we can.

The good news is there are some simple ways to combat inflation today.

For instance, as we told our subscribers back in December, sometimes even the government accidentally does some good. And its I-Series savings bond is one of them.

It’s an inflation-protected bond that resets its interest rate every May and November depending on the rate of inflation at the time.

Today, it’s paying a rate of 9.62%. That’s more than enough to beat the current rate of inflation.

You can buy these bonds directly from the U.S. Treasury.

It’s actually fairly easy to set up an account and buy these bonds.

The downside is you can only buy $10,000 worth per year per person. (Or up to $15,000 if you elect to use $5,000 of your income-tax refund to invest in these bonds.) Additionally, you can’t withdraw any money for at least 12 months. And if you take money out before a period of five years, you forfeit 90 days of interest.

After five years, there is no penalty.

Overall, it can be a great alternative to help take a bite out of inflation.

At the end of the day, protecting your nest egg is one of the most important rules of saving. So owning assets that can compound your money over the long run at rates better than inflation can make a huge difference.

For some of you, the I-Series savings bond may fit the bill. For others, you may feel uncomfortable handing the government your hard-earned dollars after they helped create this mess. In that case, finding alternative assets that tend to do well in periods of inflation may make more sense.