Inflation remains the talk of the town.

And with the way things are looking right now, it doesn’t seem that’s going to change anytime soon.

To say that the outlook is disturbing is an understatement.

In today’s Dispatch, we’ll explain what’s happening and why. We’ll also show you where to get details to protect your wealth from the worst of it – and even profit…

If you’re new, welcome to the Dispatch. And if you’re a regular reader, welcome back.

We do this by showcasing ideas from in-house investing experts Dave Forest, Nick Giambruno, and the founder of our business, Doug Casey.

Today, we’ll take a deeper look at the inflation story, and how one of our experts is helping regular Americans deal with this inflation scourge.

Two headlines on the Bloomberg website yesterday prove that inflation is taking hold.

The first: “The Fed Has 21 Trillion Reasons to Combat High Inflation.”

The second: “Cracks in the Housing Market Are Starting to Show.”

Inflation is pushing up the cost of everything. Not just stock and crypto prices… but house prices, car prices, and other asset prices, including sports collectibles.

As reported by NBC Sports:

Two pieces of memorabilia linked to the former New England Patriots quarterback have sold at auctions within the past week….

How long can this all last?

Let’s get back to the first Bloomberg story, “The Fed Has 21 Trillion Reasons to Combat High Inflation.”

The U.S. consumer price index jumped 5% in May from a year earlier, while core CPI climbed 3.8% in the biggest increase since 1992. Both measures exceeded estimates on a month-over-month basis as well, suggesting that the price pressures in the world’s largest economy aren’t just due to so-called base effects.

The reference to “base effects” is the idea that prices are simply bouncing back from lower prices caused by COVID-19 shutdowns a year ago.

The Bloomberg report is right. This isn’t just about “base effects.” Because based on our rough-and-ready analysis, from information taken from Bureau of Labor Statistics (BLS), the idea that prices fell in 2020 before rebounding in 2021 just doesn’t ring true.

This Is NOT Temporary

The Federal Reserve has tried to claim that high inflation won’t last. After the April Fed meeting, Fed Chairman, Jerome Powell said, “An episode of one-time price increases as the economy reopens is not likely to lead to persistent year-over-year inflation into the future.”

To test the idea that this is temporary, we selected – at random – six basic grocery items for which the BLS monitors prices on its website. Those items are milk, eggs, coffee, chicken, bread, and bacon.

The data goes back to 2011. We then took the average price for each of those years for each item.

The result is the table below: 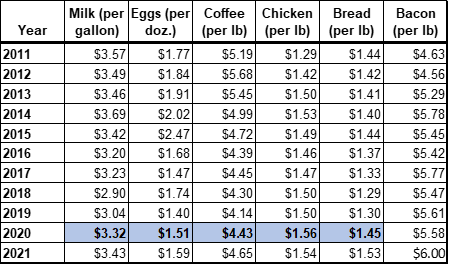 You can see that over the years, prices have been volatile. But if we look at prices from 2018 onwards, there has been a clear short-term trend… a trend that started before COVID-19 and has continued through it.

So much for the idea that this is a temporary increase in inflation.

The Fed Is Blind to This Fact

Far from being temporary, Casey Research investment expert Dave Forest says that the inflation story is only one part of a much bigger problem.

And that is how inflation and the government stimulus payments have only succeeded in creating a huge wealth gap between the super-rich and the average American.

In fact, according to the Bloomberg Billionaires Index, the top 59 wealthiest Americans have more wealth than half the U.S. population. Yet we still have promises of more stimulus to come. That will only continue to increase the wealth gap.

That spells doom for the middle and lower classes. What the Fed fails to see is that their policies are causing a silent tax on the majority. We’re already starting to see that in the form of cost inflation of everyday goods like food.

You’ve just seen the numbers to prove Dave’s point. So this is no joke.

The key question is, “how can you avoid the negative effects of these policies… and potentially profit from it?

That’s the challenge that Dave Forest set for himself. And after viewing his solution, in our humble opinion, we think he’s nailed it.

Dave has put together a package of timely investment ideas that offer investors the opportunity to both protect and increase their wealth during this ongoing period of high inflation.

All the details are right here. It’s a must-read.