Back in December, I sent out this video…

In it, I laid out two sectors to watch closely for the coming year. One of them was copper.

I believed it could be an even bigger story than gold and silver. In fact, I flagged it as my top pick for 2020.

Then, COVID-19 hit. Copper prices plunged over 25% in 60 days, along with everything else.

The ensuing economic slowdown brought more doubts about copper. Most investors assumed demand for the red metal would crater.

Since then, no one’s paid much attention to copper. Especially with other metals like gold and silver taking center stage.

Case in point: earlier this month, I was talking with a friend who runs a mining investment service. He’s very savvy on the markets.

I mentioned how copper prices hit a two-year high earlier that day. He couldn’t believe it, and had to check to make sure I was right.

Like many investors, my friend isn’t paying any attention to copper. He wasn’t even aware of the bullish moves we’ve seen in the price in recent weeks. 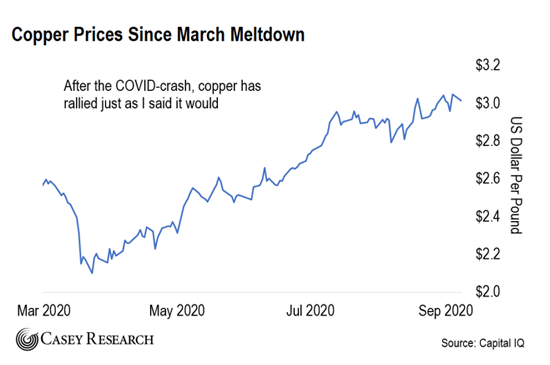 But – quietly – copper is once again shaping up big. And we may be on the verge of a big rally in the copper price.

A Massive Shortage Is About to Hit the Market

China triggered the recent copper rally. News from the world’s largest copper-consuming nation has been bullish. In July, China’s copper imports surged an astonishing 82% year-on-year. It was China’s highest monthly total ever.

Through the first seven months of 2020, China’s copper imports have jumped significantly – rising over 20% from the same period in 2019.

Think about that for a moment. We hit the worst global economic slowdown in decades. And yet China’s demand for foreign copper still grew double-digits.

Even better for copper miners – metal supplies are dwindling. In fact, copper stocks on the London Metal Exchange are the lowest in almost 15 years.

With stockpiles dwindling, copper miners are struggling to fill the gap. Most industry insiders predict a copper supply shortage happening soon. In fact, S&P Global projects the copper market will be in a deep shortage for at least the next four years.

This all jibes with my on-the-ground intel. I’ve heard from my sources that big copper users in Asia are buying mines aggressively. They’re paying top dollar to ensure a steady supply of metal.

If they’re correct, and we get four years – or more – of a copper shortage, metal prices are going to be well-supported.

In fact, I think the copper price could enjoy a big surge. Even bigger than most investors are expecting.

That’s because of something most people aren’t thinking of…

For the mainstream press, inflation is dead. Even with trillions of new dollars minted this year, no one believes prices are going higher.

This is dead wrong. Sure, we haven’t seen food, gasoline, or housing prices rocket up yet. So most people assume inflation isn’t a risk.

But inflation is happening. Just in things most people don’t buy.

Iron ore has been rising. Same with battery metals like cobalt and nickel. Even sleepy commodities like natural gas have perked up in recent months.

Same with copper. The red metal’s two-year high this month is inflation at work.

I’m not the only one who thinks so. Here’s a chart from Bank of America. It concludes that copper – and other base metals – usually move higher whenever gold and silver rise. 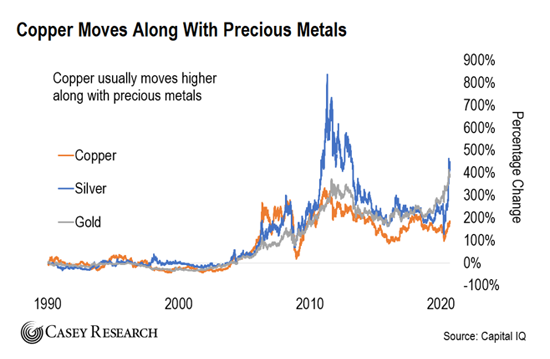 Many investors find this surprising. They think gold is a safe haven that does well in bad times. They believe copper thrives in good times, when the economy is humming.

But they’re ignoring inflation. When the money supply expands, it’s good for all hard assets.

It took a little longer than I thought, but the copper story is strong.

But if you really want to maximize your returns, my International Speculator readers have access to all my latest picks in the copper space… including one that’s up over 110%.

I cover junior miners, producers, and developers with explosive potential… including those set to benefit from copper’s rally… the historic gold boom… and even the 5G tech revolution.