We’ve explained it before…

But those two things don’t work in isolation.

There are economic data that affect them.

In the past 48 hours, two sets of data have helped show us how the economy looks today.

So how should you look at that data? And of course… what should you do with your money?

We do this by showcasing ideas from our cast of in-house investing experts, Dave Forest and John Pangere. And from the founder of our business, Doug Casey.

Today, we look at two big data points and what they could mean for your investments…

America Is Getting Back to Work

Those were the two big data points yesterday.

One was good news…

The other was enough to make you feel more than a little uneasy.

New weekly jobless claims touched a fresh pandemic-era low yet again this week, as labor shortages and companies’ efforts to bring on and retain workers, helping to put a cap on the pace of firings and other separations.

According to the Labor Department’s numbers, new jobless claims fell to just 267,000. This follows last week’s non-farm payrolls number, which showed the number of people in the workforce increasing by 531,000.

That’s good. Granted, there are still a lot of people out of work. As the Yahoo Finance report also notes, there are four million fewer people in the workforce than there were before the pandemic began.

However, as the chart below shows, the unemployment rate (currently at 4.6%) is heading in the right direction. 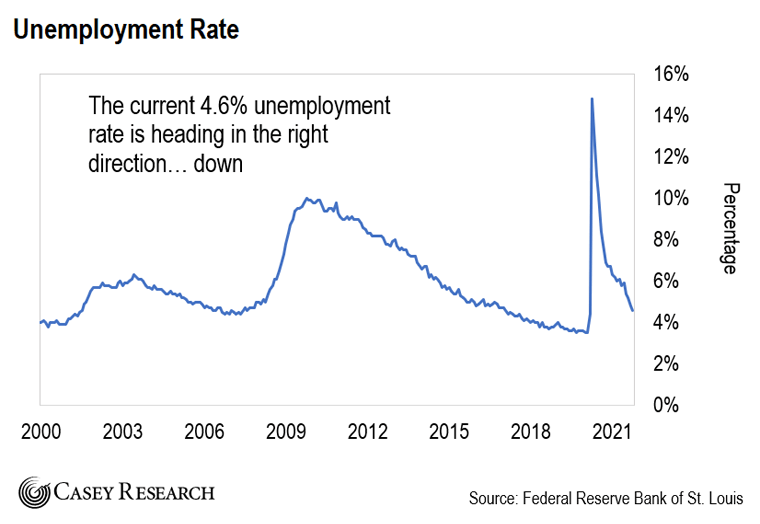 But that wasn’t the only news to hit the markets… and the other news was far less appealing.

Inflation at a Three-Decade High!

The Wall Street Journal says it all:

That’s a “three-decade high.” It makes a mockery of the Federal Reserve’s claims that the period of high inflation would soon pass.

Rather than being temporary, higher prices appear to be permanent… or at least long-lasting.

You only have to look at commodity prices. West Texas Intermediate crude oil is above $80 per barrel. Natural gas is at $5 per MMBtu (million British thermal units).

That’s still almost double where it was in February this year – although the price slipped from its peak last month.

Copper has more than doubled from its March low. And it’s around 40% higher than it was in June 2018 – its previous recent peak.

We may find out in the months ahead.

The most important part of the story for you is, “What does this news mean for my investments… And how should I respond?”

No Argument – You MUST Invest

But the answer should be obvious. If inflation is at 6.2%… and likely to remain high, there is absolutely no way that you can have all your money in cash. No way.

That’s even if you’re worried about a high stock market or other asset valuations.

The truth is that you have to invest in non-cash assets. That means being in assets that at least give you the chance to match (and hopefully, beat) inflation.

But it does mean investing. It does mean working out ways to beat that 6.2% inflation rate… while taking as little risk as possible.

And it does mean taking action. Because unless you’re happy seeing your wealth lose 5% in value (assuming inflation stays high) over the next year, you must do something.

In tomorrow’s Dispatch, we’ll help you figure that out… and provide you with information you can put into action right away.