Justin’s note: Regular readers know it’s critical to take a step back and look at the big picture every now and then. Earlier this month, I shared an important update on the bond market—and what it means for your portfolio.

Our friends over at Palm Beach Research Group are also following this sector closely. Like us, they see danger ahead for bondholders. Read on to learn more about what they’re calling “Income Exodus”… and more importantly, what you need to do today to protect your wealth.

Income Exodus is finally upon us…

At the Daily, we’ve been warning readers for months that rising interest rates will lead to an exodus of investors from the bond markets.

Now, we’re seeing this exodus play out in real time.

Since September 26, bondholders lost nearly $1 trillion according to the Bloomberg Barclays Multiverse Index… 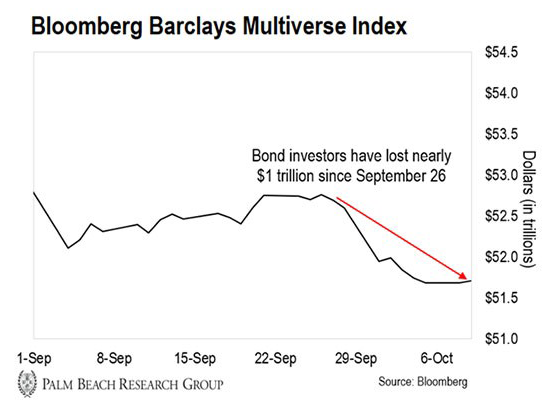 This index tracks the market value of publicly traded bonds around the world.

Bloomberg says the bond rout could spark an even worse sell-off than in 1976, the worst year for bond returns over the last four decades.

And there’s good reason for fear…

The Federal Reserve has already hiked rates three times in 2018… with plans for one more rate hike before the end of the year. And Fed chair Jerome Powell has indicated at least three more rate hikes in 2019 and one more in 2020.

We’ve warned you that higher rates were coming for more than a year now. Hopefully, you’ve followed our steps and prepared for Income Exodus… because it’s here.

If not, we’ll show you how to protect your portfolio from extermination. But first…

Bondholders are selling their positions at the fastest clip in years. The iShares 20+ Year Treasury Bond ETF (TLT) had its two biggest weeks of withdrawals in over a decade.

In July 2018, I told Daily readers to stay away from all long-dated bonds (see July 30 Daily, “Teeka Tiwari on Inflation and Income Exodus”). If TLT investors had listened, they would have saved 21% of their capital.

But it’s not just “safe” government bonds that are getting creamed. So are “junk” bonds. Take a look at this chart of the SPDR Bloomberg Barclays High Yield Bond ETF (JNK): 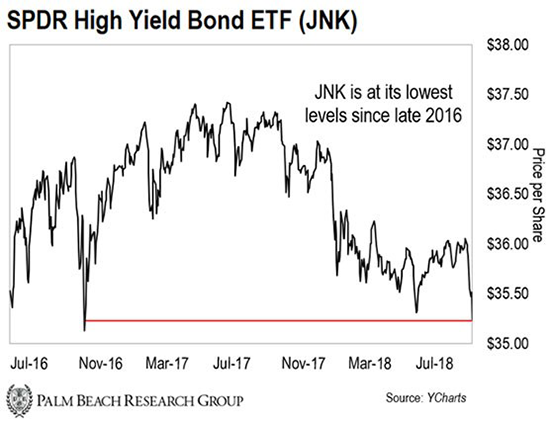 Investors are also selling their junk bond holdings. According to Bloomberg, nearly $1.5 billion fled from junk bond ETFs last week. That’s the most in six months.

It takes large institutions to trigger this much selling. And if the smart money is fleeing bonds, it’s a sign that the worst is yet to come…

That’s why you need to prepare now.

How to Insulate Your Portfolio

If you’re looking to protect yourself from Income Exodus, consider buying short-term government bonds. These are bonds that mature in two years or less.

Their par values won’t decline much as interest rates rise. That’s because the closer a bond is to maturing, the less its price fluctuates due to changing rates.

And if you want to generate bigger returns, you can consider buying closed-end funds (CEFs).

Justin’s note: You can learn how to create your own “stealth” income streams in Teeka’s brand-new video.

In it, Teeka explains why “the best income opportunity in world history is finally available to you”—and why this strategy is the perfect extension to any retirement account, 401k, or IRA.

Your bank doesn’t want you to know about this (after all, if you move some of your money into these streams, it can’t earn commissions for them). But you can see for yourself right here if this is something for you.

Today, a reader tells us how much he appreciates our Conversations With Casey…

I think your continuing conversations are great and important! The very fact that you are pointing out the dangerous revisionism that is going on, and as planned by the lunatic left, should give every reader the shivers. We are in a recognizable Marxist take-over period of Western thought and we are nearly awake to save ourselves. All the tenets of The Communist Manifesto are playing themselves out… and, I fear, not by chance. When are we going to wake up? Keep us warned and fore-armed.

How to Livestream Doug Casey’s Presentation in Bermuda

Good news… you don’t even need to leave your home.

We’ve made a special livestream available for you. Learn more here.