No, he didn’t launch an airstrike on Beijing or on a warship in the South China Sea. Instead, Trump launched an assault on Chinese exporters.

Maybe you heard the news. If not, I’ll bring you up to speed.

In short, Trump introduced 25% tariffs on $34 billion worth of Chinese goods last month.

A tariff is a tax on imported goods and services. In this case, the White House targeted a long list of goods that includes meat, grain, alcohol, and tobacco.

Instead, it responded by imposing tariffs on $34 billion worth of U.S. goods.

That led to an even bigger retaliation by the White House. On Tuesday, Trump announced 10% tariffs on $200 billion worth of Chinese goods.

And that has huge implications for the global economy and financial markets. This is even a threat to everyday Americans who don’t own a single stock.

The good news is that you can still protect yourself… and I’ll show you how in today’s essay.

But first, let me show you how Trump’s “America First” trade policies could end up hurting Americans.

They make certain goods more expensive than they need to be.

We’ve seen it throughout history, and now we’re seeing it under Trump.

Just look at what laundry equipment prices have done since Trump introduced a 20% tariff on imported washing machines back in January. 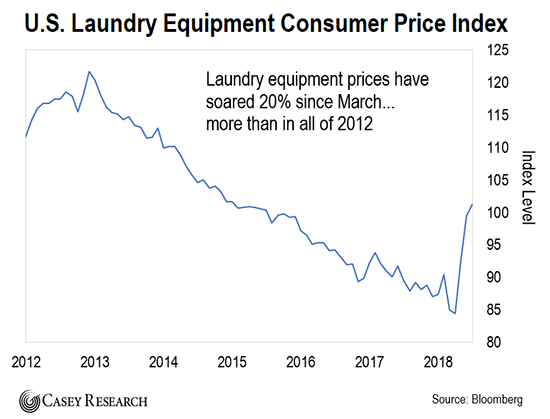 Laundry equipment prices have taken off recently. As you can see, they’ve jumped 20% since March. That’s more than washing machine prices rose in all of 2012, the last time the U.S. issued tariffs on washing machine imports.

And that’s just one example…

According to derivatives marketplace CME Group, domestic steel prices have surged 30% since Trump introduced steel tariffs in February. The same goes for lumber.

That’s a huge spike, and it hits U.S. consumers where it counts—their wallets. Last month, the National Association of Home Builders said that surging lumber prices have added $9,000 to the price of a new single-family home since January 2017.

Again, that’s because the U.S. and China are now in an all-out trade war. And there’s no telling how bad things could get.

After all, China has vowed to “strike back hard, and launch comprehensive measures that match the U.S. move in quantity and quality.” This means China could introduce more tariffs. It could also further devalue its currency to stay “competitive,” which would encourage Trump to introduce even more tariffs.

In short, everyday goods could soon get a lot more expensive. And that’s the last thing working-class Americans can afford…

We can see this in the Consumer Price Index (CPI), a broad measure of inflation. It’s rising at its fastest pace since 2012.

The Producer Price Index (PPI), another popular measure of inflation, is also climbing fast. In fact, it just had the biggest yearly jump in nearly seven years.

And there’s good reason to think prices will keep climbing. After all, major U.S. corporations are already sounding the alarm on inflation. (Regular readers will remember when I wrote about this—and showed you how to profit—earlier this year.)

Here’s what the CEO of food manufacturer General Mills said in March:

Like the broader industry, we’re seeing sharp increases in input costs, including inflation in freight and commodities. Because of our improved volume performance, we’re also incurring higher operational costs… We are moving urgently to address this increasingly dynamic cost inflation environment.

Tyson Foods and Procter & Gamble also voiced concerns over rising inflation. And they’ve warned of passing along higher costs to their customers.

• If the trade war escalates, other companies will have no choice but to do the same…

And that could take a huge toll on consumer spending, which is by far the biggest segment of the U.S. economy.

In short, a major trade war could have disastrous implications for the U.S. economy. But don’t just take my word for it. Here’s what Doug Casey told me in a recent interview:

Of course, Trump is correct in putting America first, as opposed to subsidizing other countries. But import duties don’t put America first. They damage it. The Smoot-Hawley tariffs were what really set off the last depression, because foreigners could no longer sell to us. That destroyed their economies, resulting in business failures and high unemployment.

This is why I encourage you to keep a very close eye on inflation. If it keeps rising, it could act as a huge headwind for the economy.

I also recommend picking up some physical gold.

You see, gold has survived every financial crisis throughout history. It’s the ultimate safe-haven asset.

This is why every investor should own a little gold. (We recommend keeping at least 10% of your money in gold at all times.)

As Trump’s trade war and inflation pick up steam, gold should keep its value—and even rise—as everything else falls apart.

P.S. To help prepare you for a stock market collapse, we highly recommend investing in gold for the long term. And to show you the best ways to do that, we’ve prepared a guide that compiles all the best research our team has done on gold over the years.

Have you felt the impact of Trump’s trade war? What are you doing to protect your wealth?

For the first time, world-leading cryptocurrency expert and former Wall Street hedge fund manager Teeka Tiwari has an investment announcement so BIG, he’s partnered with one of the most recognized radio and TV personalities in America to help get the word out to as many people as possible.

Teeka has teamed up with Glenn Beck to create a special, one-night-only broadcast: The Great Cryptocurrency Conspiracy of 2018.

Teeka’s found three new picks… which he calls “the three cryptocurrencies you absolutely must buy now.” And he’s giving away their names during this exclusive live online broadcast from Glenn’s Dallas studio on Thursday, July 19. 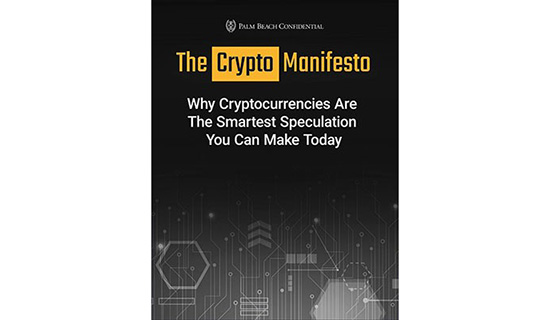