As an options trader, Jeff Clark thrives during bear markets. And as he’ll share below, he’s been waiting for a market like this for 14 years.

In fact, he’s hosting a special briefing this Wednesday, October 12 at 8 p.m. ET about an upcoming special 12-day window that could create a decade’s worth of gains in just days. You can reserve your spot for free right here.

Then, read on to learn more about his strategy for thriving during the volatility…

At the time, his 18-year-old son was a very active investor. It seemed like everybody was back then.

He tells me: “Because it only goes up!”

Then, he turns the question on me. What’s my favorite stock?

I tell him it’s Macy’s (M). Macy’s was trading at $10 per share. At the time, it traded at six times its earnings. It paid a 6.5% dividend. Even better, the business was selling off unproductive assets. They were fixing their balance sheets.

It turns out he bought Macy’s after that. I hope he held onto it. Because flash forward almost two years, and Macy’s is up 57%. And as for Palantir…. 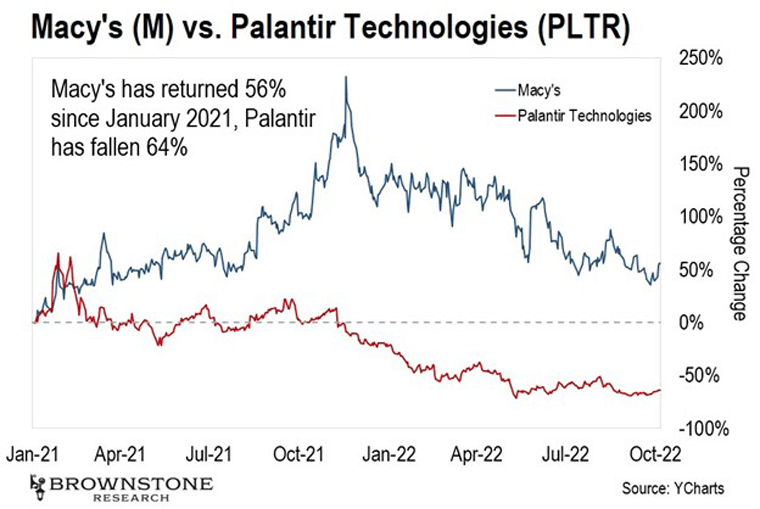 The Year of the Young Gun Is Over

I told this story at a recent conference I spoke at. And I’m retelling it today to make an important point.

2021 was the year of the “young gun.” Last year, it seemed like everything was going up. And it was. That’s why “It only goes up” probably seemed like a good investment thesis for Palantir.

That’s all over now.

With rising rates and record volatility, we’re in a very different market than we were last year. And we’re going to have to approach investing very differently.

It’s a bit of a joke, and it did get a laugh at the conference, but I’ll tell you exactly what I mean.

This year has been one of the most volatile in recent memory. Volatility makes us emotional. And we tend to make our worst decisions when we are emotional.

To get through a market like this, we’re going to want to take a page from the seasoned folks, the old guys who have invested through markets like this. In other words, we’ll want to invest like an “old fart.”

Now, if you happen to know a lot of older people like myself, we’re big fans of napping. And during turbulent times in the market, it’s important to be able to take a nap once in a while.

That’s what I’m suggesting we do. We should find great, beaten-down stocks… then take a nap.

That’s exactly the opportunity we had two years ago with energy stocks.

In September of 2020, the energy market was in shambles. With the world on lockdown, nobody wanted to touch energy stocks. You had great companies like ExxonMobil (XOM) trading at multi-year lows.

But if investors had taken a closer look, they would have seen that Exxon – one of the biggest oil companies in the country – was trading at just eight times earnings. And it was paying a 9.5% dividend.

I was so excited at the time. I was telling all my subscribers to buy Exxon. Go buy it… and then take a nap. That would have worked out great. XOM now trades around $100, a 150% return.

That’s what happens when you buy great stocks… then take a nap.

No one likes bear markets.

They’re scary, uncertain, and largely unprofitable… to most investors.

While it may seem crazy, I’ve been waiting for this opportunity for 14 years.

This is an opportunity for those willing to go against the grain.

You see, anyone can make money in a bull market. But it’s what you do in bear markets that determines who truly gets rich… and who barely scrapes along.

In fact, 2008 was one of my best years ever. Thanks to a rare 12-day window created by a “historic mathematical aberration,” I was able to make millions for myself and my clients.

I’ve used this strategy to make millions. It works best in bear markets like the one we’re currently in.

It was so profitable that I kept it secret for decades.

Many of my wealthy clients at my former $200-million brokerage firm begged me for this strategy. I even turned down generous million dollar offers from Wall Street mega-firms for my secrets.

However, I’ve seen too many investors shoot themselves in the foot during bear markets. They panic, sell everything, and regret it for years. I’m tired of seeing regular folks lose it all, while Wall Street makes billions.

So, I’m finally coming forward with all the details about this special 12-day window that could create a decade’s worth of gains in just days.

And because this window is fast approaching, it’s important you attend my exclusive presentation this Wednesday, October 12 at 8 p.m. ET. You can reserve your seat right here, right now.