Justin’s note: Today, our in-house commodities expert David Forest gives us an in-depth, exclusive look at the most important place on Earth for the gold industry right now.

It’s a view of this industry you’ve never seen before. Read on for Dave’s advice on how to profit – especially in times of uncertainty…

In February, I visited the most important place on Earth for the gold industry right now.

Conditions were less than ideal, as you can see in the photo below. I’m stopped in the picture because our SUV’s engine nearly overheated after an hour of plowing through new snow that was a foot deep. 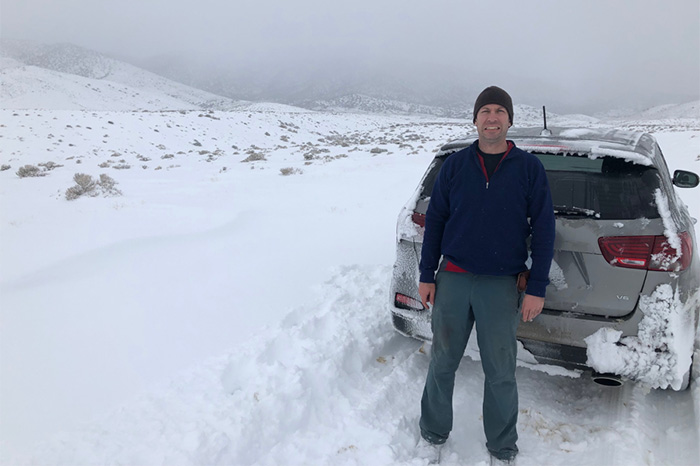 Now, most people don’t think of Nevada – largely regarded as a desert state – when they think of 12 inches of snow.

But that’s where I was.

And in today’s essay, I’ll show you why Nevada is critical for the gold business right now… and how to start profiting from this trend.

It looks pretty diverse. The “big five” gold miners have major mines on every populated continent except Europe.

But now, let’s take this a step further – and show where gold miners’ cash comes from.

Below is the same map of major gold mines – but this one shows the revenues derived from each operation. The larger the circle, the more cash generated from the mine.

That’s a telling picture. You can see how Nevada’s operations (the large orange circles) tower above the rest of the world.

Why Is Nevada a Cash Machine for Gold Majors?

Nevada’s production costs are extremely low… and this allows miners to max out their profits by having the lowest possible all-in sustaining cost (AISC).

[AISC is a comprehensive measure of mining expenses, including on- and off-site costs, plus capital required to keep the mine in production.]

First, just being in the U.S. in general is advantageous. American highway infrastructure is among the best in the world – meaning that moving equipment to site and moving product to processing and sales points is easier and cheaper than in, say, Africa or South America.

That infrastructure also means good access to crucial mining supplies such as fuel.

Power costs in Nevada are very reasonable, at 6.5 cents per kilowatt hour (kWh). Compare that to other big mining locales like Chile, where industrial power prices are double, at 13 cents per kWh.

Nevada also has major economies of scale when it comes to mining services. With several large mining complexes in the state, there are lots of companies offering drilling, engineering, and construction services in towns like Reno, Elko, and Winnemucca. That competition drives down costs.

Beyond just operating costs, Nevada also offers major advantages when putting a new mine into operation… the biggest one being there aren’t many people around.

All these advantages in Nevada are acknowledged by the global mining industry. In fact, the influential Fraser Institute survey of global mining jurisdictions released in February voted Nevada the best place on the planet in which to explore, develop, and mine.

For all these reasons, Nevada is the center of the mining universe – and the core for production and profitability for the world’s largest gold companies.

We’re going to see more of this focus on core jurisdictions like Nevada as gold companies continue to combine and rationalize. There just aren’t any mining jurisdictions – anywhere in the world – that compare in terms of production and profits.

How This Translates to Profits for Us

There is an influx of money pouring into the mining sector… prompting some key M&A (mergers and acquisitions) deals – notably in the gold sector, with some huge deals in Nevada.

Just in the first three months of 2019, we’ve seen over $76 billion flow into the mining sector, already well over a third of what we saw in 2018.

But that megadeal was eclipsed when the world’s largest public gold miner, Barrick, jumped into the takeover fray. It unveiled a hostile bid for Newmont, worth up to $18 billion. That’s a huge bid… and between Barrick, Newmont, and Goldcorp, the world’s top gold executives tabled nearly $28 billion in deals within the span of a few weeks.

In the end, Barrick and Newmont combined all of their substantial Nevada gold mining operations, assets, and reserves into what Newmont has called a “historic joint venture.”

This spells out money-making opportunities for us as speculators in these volatile times.

Money flows are rising in the mining sector, more companies are consolidating… and the gold price is on the rise as investors rush into the safe haven of gold during volatility.

Besides the fact that the big amounts of money involved here show that mining executives see something happening in the gold market (the Barrick-Newmont proposal coincided almost exactly with a sudden surge in the gold price – which took bullion to a year-high of $1,345 per ounce), our research proves that gold is the way to go during times of uncertainty.

According to our research, during the last four major financial crises, gold increased in value during a crash, gaining an average 3%.

And it delivered gains before and after the crashes – rising an average 4% in the year prior to a crash, and 10% in the year after.

So consider gold and gold mining companies if you haven’t yet… especially those that are ripe for a takeover bid by having solid exposure to leading, in-demand jurisdictions like Nevada.

In addition to major gold producers active there, I also follow a slate of junior companies developing new deposits and exploring for major new gold discoveries. All of these are going to be in demand as consolidation in the gold sector continues.

This is something you won’t hear about in the mainstream media… but thanks to a new Executive Order, something called “liquid electricity cubes” could soon be installed in your neighborhood.

Dave says these mysterious “cubes” are a mega-industry set to explode as high as 6,400%. They’ll send one specific, obscure metal soaring. And he’ll explain how you can cash in big this year. Go here to see how.

Your article on AOC was one of the best I have read. You said it so succinctly. Interestingly I tried to share it on Facebook and it said the web page was “not available” hmmm! Thank you for calling it like it is.

Doug, I’m sure your analysis of AOC is basically correct. Your article describes AOC and many of the people who support her as stupid. I gather that you don’t mean this literally, only that these people are succumbing to their emotions and not using good judgment. But my guess is that many people nowadays, and not just in the United States, are literally less intelligent than they used to be.

I believe that the cause is the widespread use of cell phones. My longtime doctor, who passed away about six months ago, was a great authority in environmental medicine and he insisted that persistent use of cell phones leads to a lower IQ. The problem could get even worse with the emergence of 5G, a more powerful and therefore more dangerous technology.

Ultimately all the folly of this thinking will be exposed when the whole house of cards known as the Empire of Debt comes tumbling down. Unfortunately, it will bring down the entire global economy. The armory is full of powder just waiting for a spark. Will it be Brexit, a hot war, or the result of various possible sovereign debt crises that spark it? That part is hard to predict. The certainty of the collapse is not. The Greater Depression is nigh!

As always, please send your thoughts, comments, or questions to [email protected].