Justin’s note: E.B. Tucker is one of our go-to gold experts here at Casey Research.

If you’ve been reading the Dispatch, you know that he believes gold will soar this year… and that now’s the perfect time to take advantage.

But there’s another reason to consider owning gold today… one you probably haven’t considered.

As E.B. shows below, the government is trying to snatch your financial freedom – and owning physical gold is the single best line of defense…

But the man on the phone was right. The cops were there. Three dozen of them, watching every exit in the building… plus an undercover FBI agent posing as the delivery man.

You see, these criminal hackers knew something most people don’t… that physical gold is totally untraceable.

Although the cops foiled the plot this time around, the criminals had successfully purchased a different box of 1,000 gold coins just a week earlier. After signing for the package, a man immediately drove half a mile to Tampa International Airport, walked through security, and flew away.

To this day, no one knows where that first $1.5 million worth of gold coins is.

Owning physical gold is the only way to prevent the government from having total control over your financial life.

Gold is not an investment asset… it’s money.

I saw the problem firsthand when I went to a local jewelry store looking for gold coins (I occasionally do this as a fun way to invest in physical gold) and found this surprising sign posted: 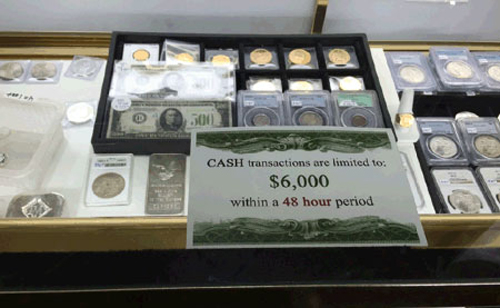 We think the government’s real intention is to keep all U.S. money in the banking system. There, it can be traced, tracked, and most importantly… taxed.

We’re likely just seeing the beginning of these laws. As the economy continues to slow, government tax revenues will suffer. When that happens, we’ll see more of an obsession with tracking – and taxing – money.

That’s why now is the time to buy gold. Gold is one of the best ways to dodge the Fed’s next radical monetary experiment and ensure your wealth. But with all of these new laws, the opportunity to buy is quickly closing.

Justin’s note: Owning physical gold is one of our core recommendations here at Casey Research. As we always say, it’s the ultimate safe-haven asset. And as E.B. showed above, owning gold today is essential to protect your wealth and financial freedom. If you don’t own any gold today, you can learn the best ways to buy and store it in our free special report: “The Gold Investor’s Guide.”

And as a reminder, make sure to mark your calendars for February 27 at 8 p.m. ET. That’s when E.B. Tucker and Doug Casey will reveal the top strategy that can help you make a fortune this year. Most investors have never even heard of this technique, but during this landmark event, they’ll share all the details, including how it’s worked for them.

We’ll be sharing more details about this event (including how you can sign up for free) next week. Stay tuned…

Today, high praise for E.B.’s recent essay, “One Night in an Insane Asylum”…

Wonderful writing and E.B. Tucker looks great with that hotel in the background behind him!

Enjoyed your story about visiting Buffalo (my hometown). Next time you visit the area please consider the Roycroft Inn, south east of Buffalo in East Aurora, NY. Likely to meet your criteria.