Justin’s note: For our weekend edition of the Dispatch, we turn to International Speculator editor David Forest, whose team has conducted a unique study on which resources are the best stores of value – and the best bets to profit on – before, during, and after a crisis.

You’ll want to keep this essay for future reference…

You’ll want to print out today’s essay and keep it close by.

My team and I conducted a deep-dive analysis in our International Speculator newsletter a few months ago. We looked closely at the top resources to own leading up to, during, and after a financial crisis.

This is critical information right now.

We see a financial crisis looming, and it’s never been more important to prepare.

After the longest bull run in history, multiple indicators are signaling a coming crash.

The leading one, called “the inverted yield curve,” has predicted every single recession in the last 50 years. And it just went into the red zone again.

[The yield curve plots the difference (or spread) between two interest rates. Usually, one yield is from a long-term bond. The other is from a short-term bond.]

The blue line you see is the 10-year yield minus the 3-month yield. The orange bars represent the recessions which followed after the yield curve inverted.

It shows that short-term bonds have a higher yield than long-term bonds with the same credit quality.

Without getting too technical, the thing to remember is that an inverted yield curve can tip you off to impending softness in the economy. On average, the market collapsed just eight months after this indicator dipped below zero. This time is unlikely to be different.

This may sound gloomy – and certainly part of the strategy in preparing for a bear market or a crash involves positioning to protect your wealth from big losses.

But I’m also interested in the opportunities for major profits that might come in commodities as a result of a breakdown in the financial system.

And it’s the potential for such gains that makes a coming financial crash a little less frightening – and maybe even something to look forward to.

So how exactly should we protect ourselves and profit if another crash emerges?

To find out, let’s look at how different metals have performed in past crises.

First, it showed which metals did well in the boom time just before a crisis (and which metals are thus leading indicators of a coming crash). 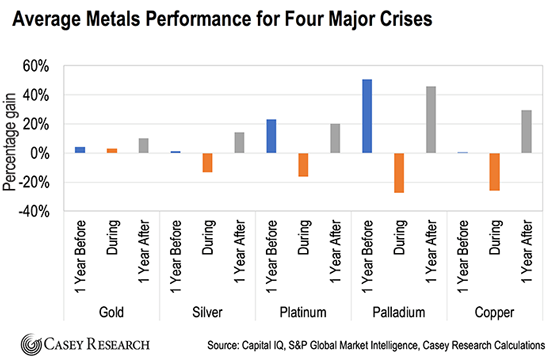 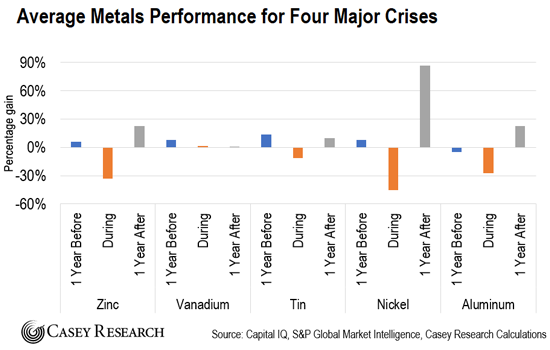 Base metals can get hit hard during tough economic times. The data back this up – during the last four crashes, the worst-performing metals have been aluminum, copper, zinc, and nickel.

P.S. Keep this essay nearby… and shift your portfolio according to the historical performance of these metals as the market changes.

And there’s another strategic metal that I’m excited about… one that could multiply early investors’ money 64 times over. I’ve identified the three best miners set to profit from $33.7 billion in new demands from Homeland Security.

What are your thoughts on Dave Forest’s research on the historical performance of these metals during times of crisis? Are you considering investing in them today? Tell us at [email protected].