The stock market just had its second-worst day of the year.

Naturally, that has many investors spooked. But it shouldn’t.

I say this because the recent sell-off could soon set up the opportunity of the decade.

I’ll explain why in a minute. And I’ll show you how to take advantage of this.

But let me first bring you up to speed…

That was its biggest one-day decline since January 3.

Now, I’m not one to obsess over daily swings. I prefer to focus on the big picture.

But you have to understand something.

The market didn’t just have one bad day. It’s had a string of bad days.

Heading into today, the S&P 500 fell five of the last six days. It also ended last week down 2.1%. That was good for its worst week since December 2018.

Many were completely blindsided. But not Jeff Clark.

Jeff, as you may know, is the editor of Delta Report. He’s also one of the most successful traders I know. In fact, Jeff used to manage $200 million in Silicon Valley.

One account he handled was worth $20 million. Another, $30 million. He made them millions of dollars more in profit… and he was so successful that he decided to retire at age 42 to spend more time with his family.

• You see, Jeff has an uncanny ability to predict big market moves…

Just last May, he predicted that we’d have a big sell-off in the fall of 2018.

And that’s exactly what happened. The S&P 500 peaked in late September. It went on to fall 20% over the next three months.

Jeff also called the sell-off that we just saw. He wrote last Monday before the opening bell:

There’s more volatility headed our way… I don’t think the selling is over.

This call probably seems obvious in hindsight. But it was very bold at the time.

I say this because U.S. stocks were off to their hottest start to a year in decades. The S&P 500, for one, was up 17% heading into last week.

• No one was even entertaining the idea of higher volatility…

Instead, people were betting big against it.

Just look at this chart. It shows the performance of the ProShares Short VIX Short-Term Futures ETF (SVXY) this year.

This fund essentially allows you to short (bet against) the CBOE Volatility Index (VIX), which measures how volatile traders expect the market to be over the next 30 days.

In other words, SVXY is a way to bet on low volatility. 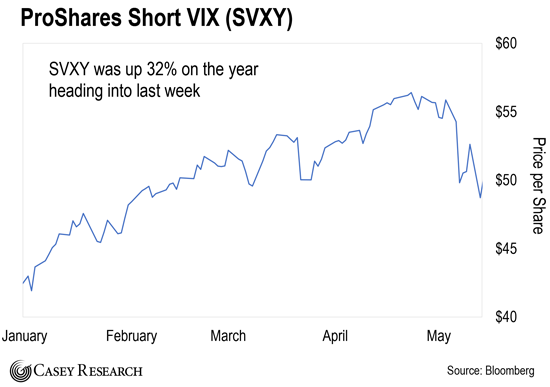 That was a very crowded trade until recently. I say this because SVXY was up 32% on the year heading into last week.

Since then, it’s plunged 13%… thanks to the recent surge in volatility. And it could be headed much lower… along with most stocks.

There has been a lot of technical damage done to the stock market this week. There’s a good chance the late-April high of 2950 on the S&P 500 may prove to be the top of this 10-year bull market. That means stock prices may be headed lower, perhaps much lower, in the weeks and months ahead.

So be sure to take precautions if you haven’t yet. You can do this a couple of ways:

I also encourage you to take a close look at Jeff’s work.

He loves a good crisis. But his approach is much different than Doug’s.

Jeff’s a trader. He likes to get in and out of positions quickly. And he often makes the most money when we’re seeing violent swings… like we are today.

His track record speaks for itself…

Jeff made 10 times his money on the Friday before Black Monday… He made tens of millions of dollars on a single position on March 2, 2000, just eight days before the dot-com bubble popped… And he made a killing during the last global financial crisis.

He helped his subscribers get rich, too.

In short, it pays to listen to Jeff… especially during times like these.

So I encourage you to check out a timely presentation that Jeff just put together. During this special event, he will share five warning signs that the mainstream media’s ignoring.

He will also explain why he believes the next crash will be a once-in-a-decade opportunity. And he’ll reveal the exact date he thinks the market will implode.

I consider this event a must for anyone who’s remotely nervous about what the market will do next. Go here to claim your spot.

Are you trying to capitalize on the recent volatility in the market? Let us know at [email protected].

Further Reading: The Next Bitcoin Rally Is Underway

Bitcoin is on fire…

The cryptocurrency is up 35% over the past week… And our friends over at The Palm Beach Daily say this run is just getting started.

The time to get in is now, before the next bull market takes off. Read why right here.

And if you’d like to learn more about the best ways to profit from the crypto boom, as well as other money-making strategies you won’t hear anywhere else, you can subscribe to The Palm Beach Daily with just one click by going here. I highly recommend it for all Dispatch readers. I read it every morning when it hits my inbox. 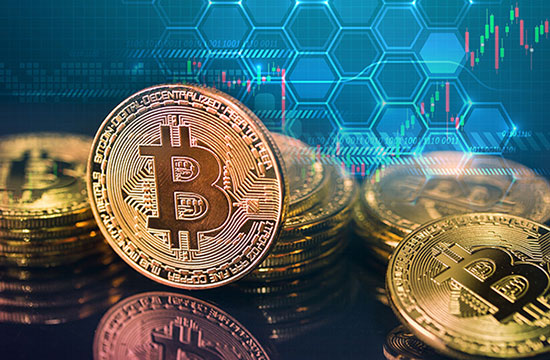