She not only survived, but soon discovered a significant improvement in her decades-old chronic pain.

(It may surprise you to learn that nobody has ever died solely from an LSD overdose.)

The woman, known as CB, contracted Lyme disease in her early 20s, which resulted in severe chronic pain in her feet.

Ever since mistaking pure LSD – in powder form – for cocaine and taking an extreme dose, she’s been able to quit using morphine to treat her chronic foot pain. She also experienced no withdrawal symptoms from kicking the opioid.

In a separate incident, a 15-year-old girl with bipolar disorder took 10 times the usual dose of LSD (it happened because her supplier made a decimal place error).

After behaving erratically for over six hours, the girl regained her composure. She claimed the LSD had cured her bipolar disorder, and that she felt like she had a “normal brain” again. She no longer experienced any sort of mental illness.

These are just a couple of case studies compiled by the University of British Colombia School of Population and Public Health, detailing the use of LSD and other psychedelic substances to treat psychiatric disorders, addiction, and depression.

It’s part of a significant rethink regarding LSD’s illegal status among scientists.

The “Open Secret” Among Billionaires and Silicon Valley

Psychedelics are a class of drugs whose primary action is to trigger thought, visual and auditory changes, and an altered state of consciousness. Major psychedelic drugs include mescaline, LSD, psilocybin (magic mushrooms), and DMT.

Unlike other drugs – like stimulants and opioids – psychedelics tend to alter the normal conscious experience qualitatively. While stimulants cause energized feelings and opioids produce a relaxed, euphoric state, psychedelics often cause altered forms of consciousness – trance, meditation, religious ecstasy, dreaming, and even near-death experiences.

Tim Ferriss is a bestselling author and entrepreneur. He’s also a renowned angel investor who made well-timed bets on Uber, Twitter, Alibaba, Shopify, Duolingo, Facebook, and many others.

He recently said this about investing in psychedelics:

I view the next five years as an absolutely golden window. There’s an opportunity to use relatively small amounts of money to have billions of dollars of impact and to affect millions of lives. There just aren’t that many opportunities that are so dramatically obvious.

Tim realized that it was an “open secret” that many billionaires, Silicon Valley employees, inventors, and other high performers regularly used psychedelics like magic mushrooms – often in small doses – to help enhance their productivity and creativity.

Ferriss also said: “The billionaires I know, almost without exception, use hallucinogens on a regular basis.”

In the early 1970s, President Nixon signed the Controlled Substances Act into law and launched the criminally insane War on (Some) Drugs.

For nearly 50 years, no company, university, or institute dared to do any in-depth research that contradicted the official government line.

With few exceptions, this situation has persisted to this day.

But now, scientists and researchers are challenging the notion that psychedelics have “no currently accepted medical use.”

Many believe that psychedelics could revolutionize mental health care by providing breakthrough treatment options for PTSD (Post-Traumatic Stress Disorder), depression, addiction, anxiety, and a slew of other mental illnesses.

The potential is so promising that even the US federal government is showing flexibility for the first time.

Legalization Is Rolling Out Nationwide

The FDA’s refreshing attitude is just one of many significant cracks appearing in the prohibition regime.

Washington, DC, voted on whether to decriminalize psychedelic plants like magic mushrooms or ayahuasca.

Oregon became the first US state to legalize psilocybin.

In Oregon, it’s legal now to use psilocybin under a doctor’s supervision. Medical professionals will start adding psychedelic mushrooms to their treatments of depression, anxiety, and addictions.

In Washington, DC, plants that contain psychedelic compounds were assigned the “lowest enforcement priority,” which means they are at or close to the bottom of any police officer’s concerns.

Today, there are efforts to legalize psychedelics in about 100 other US cities.

The situation with legal psychedelics is reminiscent of cannabis around 2012, when the first states started legalizing recreational use. It gave birth to a global megatrend worth hundreds of billions of dollars and created fortunes for early investors.

I think we’re going to see the same thing happen with psychedelics. But it could happen much faster, as cannabis legalization has already blazed the trail and provided a legalization template.

How This Trend Could Make You a Fortune

Consider the case of Canopy Growth. It’s also one of the largest cannabis companies by market cap, and has long been a pioneer in the space.

Canopy went public on Toronto’s TSX Venture Exchange on April 4, 2014. Its shares closed out at C$2.59 that day. At writing, Canopy trades at over 13 times that. Peak gains were even higher at over 27 times its initial listing price. 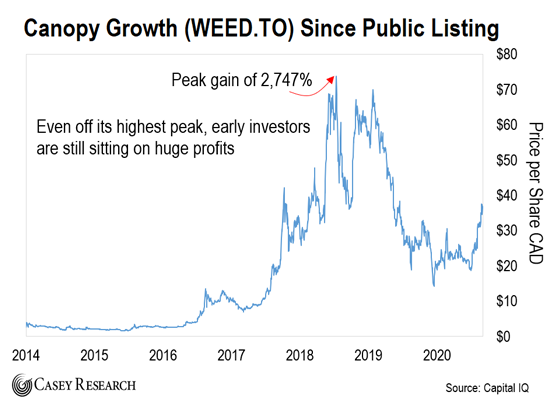 Imagine getting in on Canopy Growth in the earliest days of the cannabis boom.

The same kind of opportunity is in front of us today with psychedelics. We’ll be talking about “mushroom millionaires” very soon.

In my elite Crisis Investing advisory we are already well-positioned to make big profits from the legalization of psychedelics. I was finding ways for my subscribers to profit long before practically anybody else. One of my top psychedelic stocks is up over 800% as of writing.

But don’t worry, the party is just getting started. It’s still early days for the trend of legalized psychedelics… and the biggest gains are ahead of us.