This is disturbing. In fact, it’s downright criminal – a sign of moral bankruptcy in our society.

It’s something everyone should be aware of… Something we all should be outraged by.

And that is the yield on the 10-year government Treasury bond. It doesn’t sound like anything sinister – but it has a huge effect on the hard-earned savings of millions of Americans. 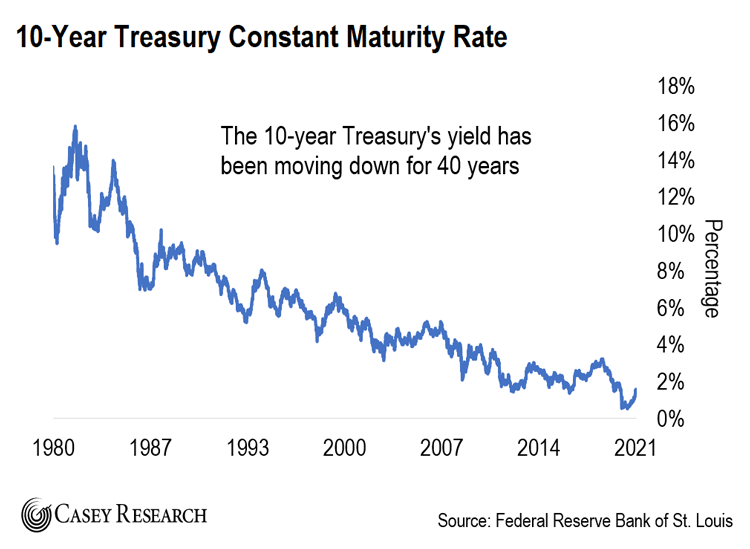 Very few charts in finance show a trend this distinct and sustained. The yield on the 10-year Treasury has been relentlessly moving one direction for the last 40 years.

If this frightens you… It should. But that’s good. Because it means you’re ahead of the game. You already know about it, and you’re in a position to start doing something to change it.

Fortunately, I’ve found a way to take back control of your savings.

Rethinking How We Invest

We now have an experimental banking system that doesn’t give a damn about your money. It thinks it doesn’t need your savings… and it’s certainly not going to pay you for them.

I’ve thought a lot about what to do with this completely unfair situation. We simply can’t rely on the government anymore.

Instead, I think we need to change our whole approach to investing…

Because I’ve found there’s another way to work this retirement equation: invest a small amount of money at potentially very high rates of return.

And we’ll use this strategy for life-changing gains as high as 4,942%.

I’m not going to make you promises. Instead, I’m going to show you results I’ve already achieved for my readers with this strategy.

Now, I’m also not suggesting you should plow your life savings into my strategy. In fact, just the opposite. The key is to invest a very small amount of money – and create a meaningful benefit to your wealth and standard of living.

What do I mean by a small amount of money?

Let’s take a page from the government, and say 0.5% of your savings – the same rate it thinks is appropriate to pay you on a 10-year Treasury.

For the average retiree, 0.5% of savings would mean investing about $850. That’s about half the amount many people spend yearly on take-out coffee.

Can you really move the needle investing $850?

Moving the Needle on Your Savings With Less Than $1,000

We’ve been moving the needle on people’s wealth with less than $1,000 for more than two years.

And I do it with something called warrants.

Take a look at my results.

One recent warrant recommended to readers of my Strategic Trader advisory – using the strategy I’m talking about – returned 4,942%. Warrants traded at just $0.19 in February 2019, and we cashed them out for over $9 in October 2020.

Here’s the critical point: at that 4,942% return, if you’d invested just $850, you would have walked away with over $42,000. That’s enough to pay most of the yearly living expenses for an average retiree.

As I write, I have 18 open positions using our proprietary warrants strategy. Fifteen of them are up. In fact, one of my plays is currently up as high as 1,341%. And five others are in the triple-digits, up between 171% and 319%.

And I think they’ll go even higher from here.

How to Use This Unique Strategy for Triple-Digits

I want to stress – these investments aren’t complicated instruments like cryptocurrencies or stock options. You can buy and sell them as easily as regular stocks from just about any online brokerage account.

And the best part is, even if the wheels come off – if you lost your entire $850 investment – you wouldn’t come close to jeopardizing your financial future. Not even a year’s worth of take-out coffee.

And as I showed above, there’s plenty to gain using this unique strategy.

I believe this is the right way – maybe the only way – to protect our financial future during these unprecedented, and dangerous, financial times.

If the government wants to keep running experiments with our wealth, we’ll flip the game on them.

If you want to learn more about how you can use this explosive strategy in your portfolio… along with my top pick to get you started… I urge you to watch my briefing right here.

Plus, we’ve created the first-of-its-kind Warrants Master Course… and it’ll go over everything you need to know to get you into this strategy with ease.