I’m passing along today’s essay because my job is to make sure you’re covered – no matter what happens. And during times of volatility and uncertainty, it pays to listen to Jeff’s advice… and his most recent market crash prediction.

Read on for Jeff’s most profitable investing strategy of 2019…

Today, I’ll show you what will be the most profitable investing strategy of 2019.

But if you use this strategy, you’ll be able to double your money over and over while most other investors rip their hair out.

Now, when you hear “technical analysis,” you might picture day traders drawing triangles on chart screens. The charts probably look more complex than anything you’ve seen before.

It might seem “scientific”… even a little bit intimidating.

But really, technical analysis is much more of an art than a science… That is, if you try to force it to conform to strict rules and formulas, it’s likely to be wrong almost every time.

Try thinking of it the way I do… A short-term chart of a stock (or index) is simply an emotional picture of the stock at a specific moment in time.

Stock charts tell me how traders/investors are responding emotionally at any given point in time. Human emotions are remarkably consistent. We tend to respond the same way, over and over again, to the same circumstances.

So if I can go back into a chart, find a time when the conditions were similar to what they are today, and note how the chart behaved afterwards… it can provide strong clues for what to expect in the future.

But technical analysis is emotional. It evolves over time. So, conditions that used to provide a catalyst for a big move may need to get more extreme to cause a similar movement the next time.

Think about it this way…

When I first got married, I’d often come home from work, take off my socks, and drop them on the floor next to the couch in the living room. My wife would come home, see my socks on the floor, and get all ticked off about it. In other words, she’d have an emotional reaction to her husband leaving his socks in the middle of the living room floor. This happened over and over again.

Now, think of how this reaction would look on a typical stock chart…

It’d start with a line trending sideways – my wife’s emotions before she knew all about my sock habit. You’d see the line climb as my wife got more and more frustrated… 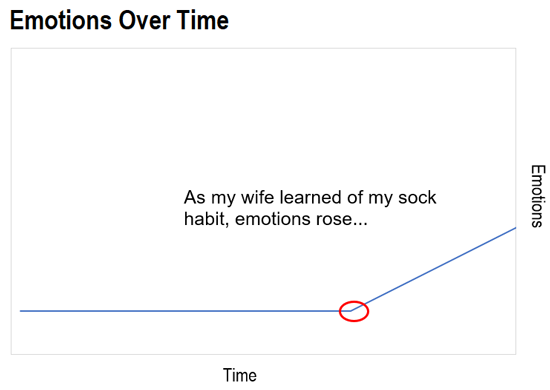 She still had the same emotions. But she had adapted. She had evolved. She suppressed her emotions and would need a bigger catalyst before getting upset with me again…

Over on the chart, things have calmed down. The line on the chart is headed sideways, with little action in either direction. There’s less volatility. 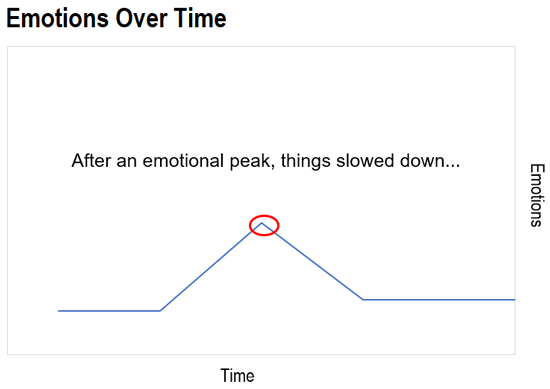 But in the background, energy is building. Those socks had to be going somewhere… and it wasn’t the hamper.

That catalyst was provided when my wife was vacuuming one day and moved the sofa in order to vacuum the carpet beneath it. She found about a dozen pairs of my dirty socks tucked beneath the couch.

You can guess what happened next on the chart… 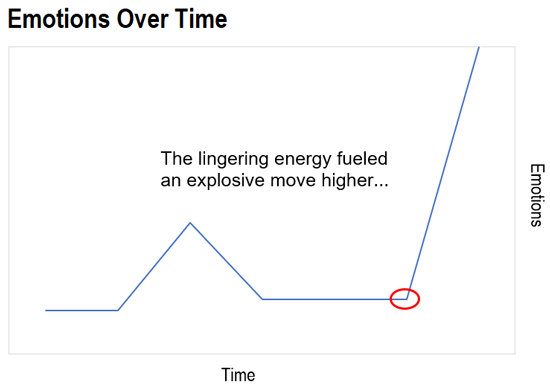 Profiting in a Crazy Market

Like the charts above, a short-term stock chart is simply the emotional representation of traders’/investors’ reactions to the stock.

If we can spot previous patterns on the chart that look similar to how that chart looks today, then we can see how those previous patterns played out and then trade the stock in anticipation of a similar reaction.

A lot of my trading strategy revolves around finding emotionally overbought/oversold conditions that are ready to reverse. Technical analysis helps me identify conditions in which investors’ emotions have gotten extreme, and in which I can see how stocks have reacted to similar conditions in the past.

And here’s why: Periods of low volatility are always followed by periods of high volatility – and vice versa.

Consider this… In 2017, stocks just kept marching higher. Overbought conditions just got more overbought. There was nothing for traders to do. No volatility.

At the beginning of 2018, the stock market had just come off the least volatile period of the entire bull market. So investors who figured stocks would go up forever were greeted with massive drops in February, October, and December.

Most long-term investors won’t know what to do. But this is exactly the environment where guys like me (traders) can thrive.

Investors should take their gains for the year and sit this one out. It’s probably the best way to keep your portfolio intact.

But for traders who pay attention to technical analysis, there are opportunities to profit… every single trading day… no matter what the market does.

P.S. No matter how bad the market gets, know this: You don’t have to be a victim.

A lot of folks lost everything in 2008. It was one of the biggest stock market crashes in modern history. And I predict the 2019 market crash will be even uglier – with greater destruction.

But there’s something you likely didn’t know about 2008. A certain group of people made out like bandits…

And on Wednesday, May 22 at 8 p.m. ET, I’ll be going live on camera to give you the full story. I’ll tell you the exact day I think the market will crash… and reveal the strategy I used to make triple-digit gains – even on the ugliest days of 2008.

Are you worried about a market crash… or do you think this tired old bull will keep on running? Are you taking any steps to shore up your portfolio? Let us know at [email protected].

Unlock $1,000 to Use Towards Any of Our Elite Publications

Your favorite Casey Research gurus… along with financial heavy-hitters like Jeff Clark, Teeka Tiwari, and Jeff Brown will all be at the second annual Legacy Investment Summit in Southern California.

On September 23-25 you’ll have the chance to meet them all… shake major Wall Street players’ hands… ask them for insights you won’t get anywhere else… and hang out for cocktail hour. Not to mention the exclusive presentations and breakout sessions…

And with any ticket, you receive $1000 toward a subscription of your choice – from us, or the seven other companies in our exclusive network.