It’s nice when a good thing gets even better.

Like finding out your new partner is a millionaire or a master chef. Or buying a new sports car, then opening the glove box to see a stack of hundred-dollar bills.

This is a question I get asked a lot about Super Spikes.

How much better can it get?

This comes from my readers who’ve already done well on hard tech like lithium. In my Strategic Investor advisory, we’ve booked gains of 194%, 284%, and 385% on lithium stocks.

There’s a good reason. Lithium is one of the key metals powering the electric vehicle (EV) revolution. Even Elon Musk recently suggested Tesla might get into the mining business to secure lithium.

Now, 284% gains are terrific. It took the S&P 500 the last 11 years to make that return. My readers got it in less than nine months with lithium companies.

That seems extraordinary. So it’s hard to believe it could get better than that.

I’m here to show you how it can.

Check out the chart below. It shows the Super Spike of the late 1970s. 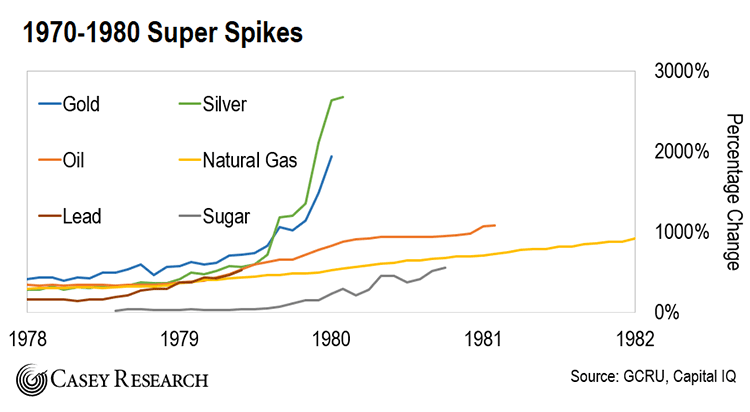 Most investors remember this oil shock. Coming into 1978, crude posted massive gains. Early investors made as much as 500% from oil’s bottom at the beginning of the decade.

Few investors remember all the other big gains. Everything from silver to lead to natural gas delivered hundreds of percent.

It all looked pretty good. I’m sure lots of investors took these gains and ran, thinking it was the top.

In 1979, the Super Spike began. In a matter of months, triple-digit gains turned into quadruple digits.

Those who held on got rewarded handsomely. You could have multiplied investments 10x when the Super Spike hit.

Those are rare gains in any market.

And Super Spikes can get even wilder than that.

These Paydays Were Possible During the 2000s

The most recent Super Spike window came in the 2000s. I was an analyst covering uranium stocks at the time.

I know multiple investors who retired young on the money they made in uranium. One of them is still living off the profits he made reinvesting that windfall.

That’s 15 years of retirement gains made mostly within months of the Super Spike.

And check this out… uranium wasn’t even the biggest gainer during the 2000s Super Spike window. Rare earth metals and vanadium both delivered even more. 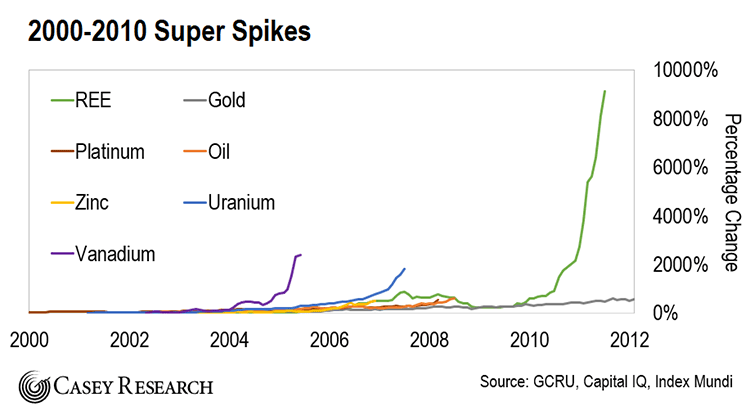 Those are huge paydays. Some are generational – they literally come around once in a lifetime.

That wealth creation captivates me. It’s why I’ve made hard assets my life’s work.

Gains this quick – and this big – seem unlikely. Even impossible. You might think it’s some trick of the data, making the payday look bigger than it actually was.

I’m here to tell you personally that these kinds of gains are entirely possible. In fact, these massive gains are hardwired into the commodities business.

The Next Massive, Money-Making Opportunity

During COVID, I got sick of sitting at home. I snuck away to Nevada and staked an old silver mining district. That’s the process where you stick wooden posts in the ground to claim the mineral rights on a piece of desert.

Staking those claims and registering them with the government cost me less than $20,000.

Just a few months later, I sold those same claims for over $1 million.

Those gains are in the 10,000%+ range – just like the maximum wins I showed on the charts above, during previous Super Spikes.

That happens because of shortages. Commodities are depleting assets. Unlike a factory, law office, or rental property, the more you use hard assets… the less you’ve got.

For that reason, producers are constantly looking for more. When a great deposit of gold, copper, or natural gas comes around, they’re willing to pay premium prices.

Today, we’re seeing acute shortages of almost every hard asset. Even Bloomberg is on this story:

That’s just one reason I believe this Super Spike could be a massive, money-making opportunity.

Tune in with me the next few days – leading up to my Super Spike Summit on June 8 at 8 p.m. ET – and I’ll show why this Super Spike could be up to three times larger than anything we’ve seen before.

Whether you’re skeptical, excited, or just a little bit curious, this is a story that you’re going to regret if you don’t see all the details. Don’t live with the knowledge that you missed this potential once-in-a-lifetime event.

Get all the info, and decide for yourself if the Super Spike is your next big profit opportunity.

P.S. So you don’t miss anything leading up to the Super Spike Summit, make sure to register for my VIP reminder service here. I’ll send you a free gift – valued at $1,795 – just for signing up.