Every December, we make predictions for different key markets and economic indicators for the coming year. We don’t care about the exact price. Instead, we want to determine the direction of the move: higher or lower.

We also like to review our previous year’s predictions to see what we got right and what we got wrong.

For 2022, we got six out of eight categories right. It’s hard to make predictions. Getting all but two of them right is better than most economists.

And as we head into 2023, getting the big picture right is more important than ever.

That’s because now is the time to stay away from trouble.

With that, we’ll start with one of the main things on everyone’s mind today: inflation.

The Fed’s Transitory Narrative Was Wrong 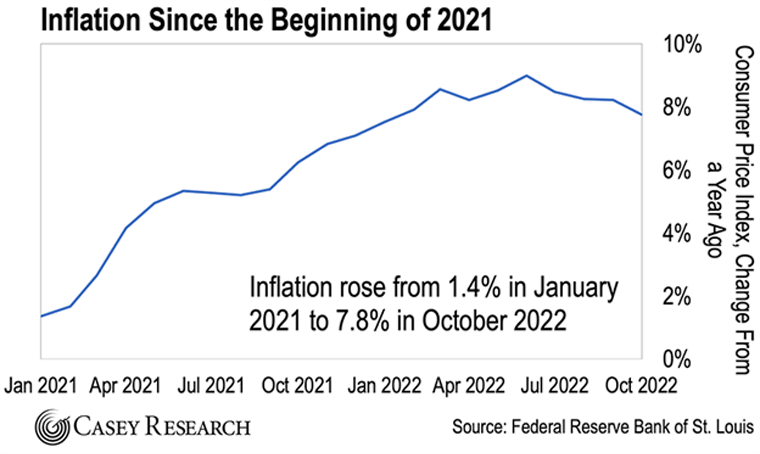 Today, inflation continues to be a problem even with the Fed’s relentless rate hikes.

According to the Bureau of Labor Statistics (BLS), prices rose 7.7% in October on an annual basis. That’s the most recent month we have numbers for.

Overall, the number is down from its peak rate of 9.1% in June. But it’s still higher than this time last year when the reading came in at 6.2%.

The transitory narrative proved to be wrong.

In fact, we think inflation will be here to stay for longer than most economists believe. And a lot of that has to do with energy.

Energy is life. It gives rise to everything we do in our modern world. Food, electronics, and transportation… they all need energy in one form or another.

To illustrate this, we only need to look across the pond to Europe.

Germany is an industrial powerhouse. It created enormous wealth using cheap sources of energy to transform raw materials into finished products. Nearly half of that energy came from one source: Russia.

Credit Suisse strategist Zoltan Pozsar estimates that Germany was able to add $2 trillion in economic value from just $20 billion in Russian energy. That’s 10 times leverage that was well worth it for German industry.

But now, the war with Ukraine is turning things upside down.

Energy prices in Europe are soaring and none more so than natural gas. In fact, natural gas is selling for six times higher in Europe than in the U.S. 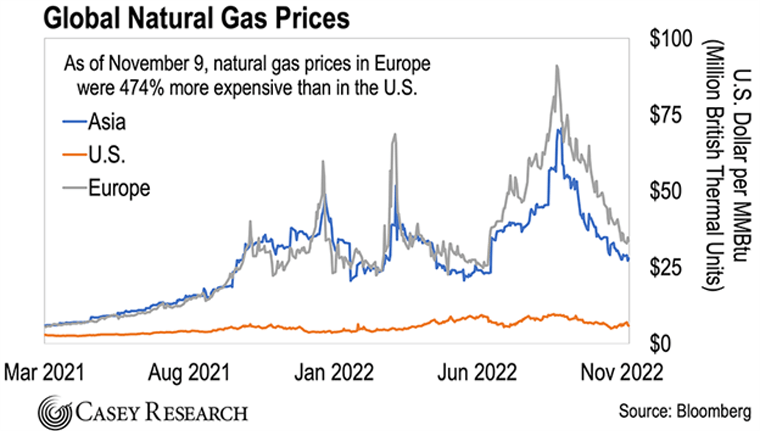 That’s causing many German industrial companies to close shop. That includes chemical powerhouse BASF, who is cutting or closing some of its plants.

The way energy prices move has a trickle-down effect. When one of the main inputs in nearly every industry surges, you can bet that prices for everything else will follow.

And as we’ll show you with our coming prediction for oil and gas, we don’t think this trend is going to end anytime soon.

Inflation’s Near and Future Trends

In our view, we’ll see inflation come in waves.

Take a look at the chart below. It shows the year-over-year change in the Consumer Price Index (CPI) going back to the 1960s. 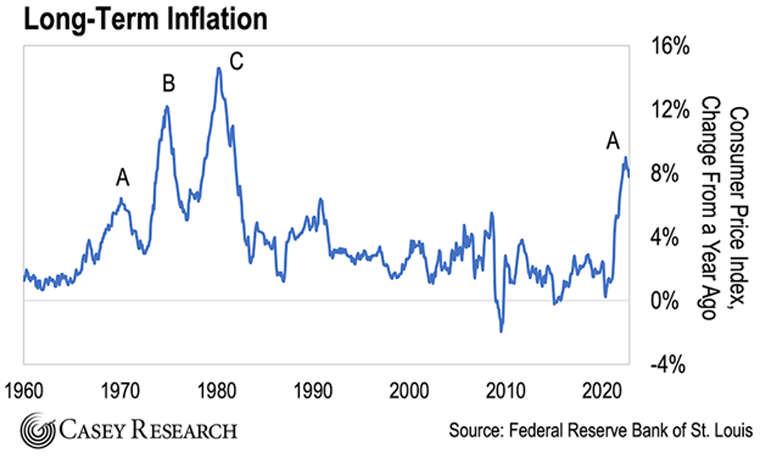 While many people remember the double-digit inflation period of the 1970s, the trend started in the 1960s. And it came in three powerful waves.

October’s CPI could mark an important point: the beginning of the end of the A wave. If that’s the case, it could have some influence on what the Federal Reserve does next.

Our prediction for inflation this coming year will influence some of our other predictions as well. And in our view, inflation will continue to print lower until it settles in a range that’s still above the 2% target. 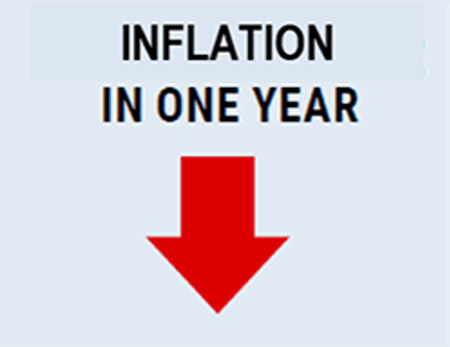 So compared to this year, we think the rate of inflation will be lower.

However, don’t mistake this for what we see as a structural shift in the inflation narrative. So long as energy prices continue to increase over the long run, inflation is in a long-term uptrend.

When the “B” wave hits is anyone’s guess. But make no mistake, we think it will hit sometime in the near future… and that it will be a shock to the system.

P.S. Tomorrow, we will dive into our predictions for the U.S. dollar. So stay tuned…