…and I did absolutely nothing. I didn’t trade stocks, options, or cryptocurrencies. I just held U.S. dollars.

That’s right. I didn’t do a thing and the money in my wallet soared in value.

How exactly did this happen? It’s simple, really…

I arrived here nearly three weeks ago. I spent two weeks in Istanbul before heading to Turkey’s southern coast for the weekend.

I came to discover a new culture, eat Turkish cuisine, and enjoy the country’s beautiful beaches. 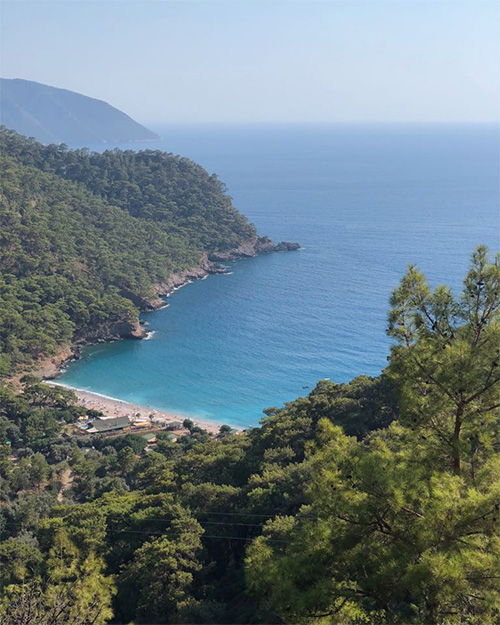 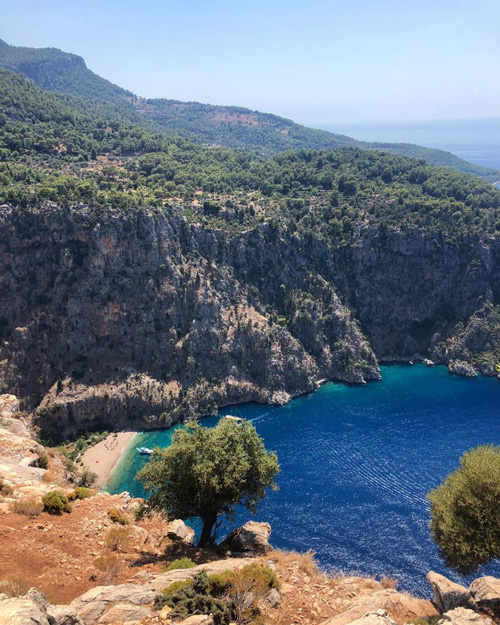 I also came because I knew Turkey would be cheap. But I couldn’t imagine just how cheap things would get.

You see, when I arrived, one dollar was worth about 4.8 Turkish lira. Today, one dollar is worth 7 lira.

This means one U.S. dollar in Turkey is worth 46% more than it was just three weeks ago.

And I see no reason why this won’t continue.

But the panic didn’t fade away over the weekend. Today, the lira’s down another 8% as we go to press.

And it’s down 46% against the dollar on the year. That makes it the world’s worst-performing currency after the Venezuelan bolívar and Sudanese pound.

As a tourist, I don’t mind this. Meals, glasses of wine, and cab rides are getting cheaper by the day for me.

But there are also 80 million people who call Turkey “home”… and they’re getting crushed by the falling lira.

It’s so bad that you can’t go anywhere without hearing people talk about what’s happening. And I don’t just mean men in suits. Everyone from waitresses to cab drivers is fretting about the weak lira.

Now, you might not care about this if you live in the United States. But you should understand something…

I’ll explain why soon. I’ll also tell you what this means for your wealth.

But let me first tell you why the lira’s in a downward spiral.

Specifically, he imposed a 50% tariff (tax) on Turkish steel and a 20% tariff on Turkish aluminum.

The White House did this because Turkey has placed American pastor Andrew Brunson on house arrest while being tried on spying charges. Of course, that’s the official reason. And I doubt that it’s the only motivating factor… But that’s a topic for another day.

In any case, Trump’s actions sent the lira into a tailspin.

As a result, many Turks blame Trump for the mess they now find themselves in. But those folks are missing the big picture.

• A currency crisis has been brewing in Turkey for years…

To understand why, just look at the chart below. It shows Turkey’s money supply: 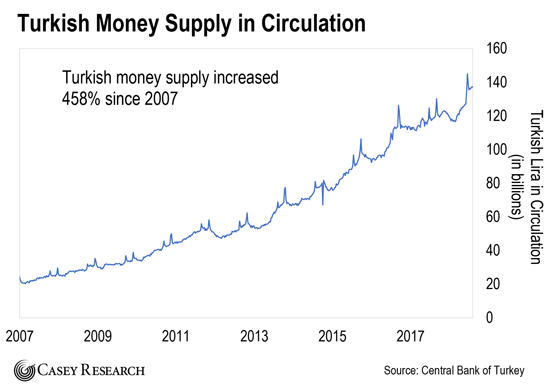 You can see that it’s up 458% since the last financial crisis. That’s because Turkey’s central bank has been printing money like crazy over the last 10 years.

That alone will weaken a currency. But that’s not the only reason the lira’s tanking.

This happened, in part, because the Turkish government wants to juice economic growth. And it did… to an extent. Last quarter, Turkey’s economy grew by 7.4%. That’s almost three times as fast as the U.S. economy’s growth.

But debt for the sake of growth only works if you can pay off your debts. And that could be difficult…

It did so because the U.S. Federal Reserve, the European Central Bank, and other major central banks have held interest rates near zero for nearly a decade. This made it incredibly cheap for countries like Turkey to borrow money.

But here’s the thing… Foreign debt becomes difficult (more expensive) to pay back when the local currency loses value.

And Turkey has more foreign debt than it knows what to do with. In fact, the International Monetary Fund (IMF) estimates that foreign currency debt now exceeds more than 50% of the country’s annual economic output.

Because of this, there’s a good chance Turkey’s currency crisis will turn into a full-blown debt crisis.

That would put even more pressure on the lira, making it even harder for the Turkish government and businesses to pay back their loans.

Today, it announced a series of measures that it hopes will bring liquidity and support the country’s banking system.

But these measures may not be enough…

…and not just against the lira.

Now, these obviously aren’t huge economies. But the dollar’s also broken out to a one-year high against the euro. 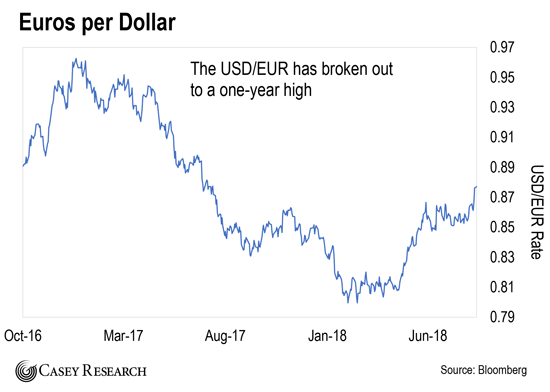 That’s a big deal. After all, the euro is the biggest counterweight to the dollar. So the dollar tends to strengthen against other currencies when it’s appreciating relative to the euro.

• In other words, the dollar should keep strengthening…

That’s a problem for Turkey… and other countries with a lot of dollar-denominated debt.

But don’t worry. You can turn this crisis into profits.

To do so, I suggest betting on the dollar. And you can do that by buying the Invesco DB US Dollar Index Bullish Fund (UUP).

This fund rises when the dollar does the same. That makes it an easy way to profit from a strengthening dollar.

I’ll have much more to say about the crisis in Turkey in the coming days… including what it means for stocks. Stay tuned…

Today, readers respond to Friday’s Conversations With Casey, where Doug shared his thoughts on the current U.S. justice system…

Doug, I’m a retired lawyer (not that being so gives me any deep insight into justice—for that, I look to ethical principles). And I 100% agree with everything you said in this interview. In fact, I can’t recall any of your many interviews that I have read where I disagreed with you.

Mr. Casey, you do some very fine work in the world of finance and investing.

I do not especially agree or disagree with your conclusions about the justice system. However, I don’t think your logic and reasoning is particularly good, and I strongly believe that you should stick to the world of improving one’s financial position.

It was a plan to bypass the big banks and politicians and return America’s money to the people. But these so-called “Reagan dollars” were never circulated. The plan was forgotten… 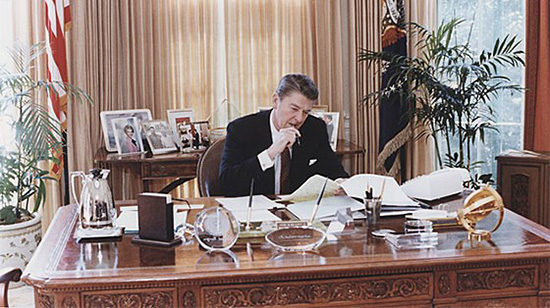