Justin’s note: As regular Dispatch readers know, part of my job at Casey Research is to pass along valuable ideas that come across my desk. When I read today’s essay from Exponential Tech Investor editor Jeff Brown, I knew I had to send it your way.

With decades of experience in Silicon Valley’s inner circle, Jeff has an inside track on the most disruptive tech trends—before they hit the front pages. Today, he shows why there has never been a better time to invest in quality, small-cap tech stocks—and reveals how fortunes are being made in the tech sector…

Over the next 10 years, advances in technology will bring such fundamental changes to our lives, they’ll dwarf all the progress we’ve seen since the great tech revolution began in the late 1990s.

Everything will change. The ways in which we work, shop, sleep, eat, travel, bank, communicate, entertain ourselves, conduct warfare, manufacture, design, distribute, create, transact, and maintain our health will all be different.

Already, we’ve seen radical developments in technology during the last two decades—streaming video, cell phones, the internet, etc. This has resulted in some life-changing returns from the high-technology companies powering these transformations.

But the advancements in technology we’ve seen to date are only incremental… In fact, they’re just the foundation for future, technology-based innovations that will be exponential.

We’re on the cusp of a new tech revolution. And those who act now will be the first to realize the extraordinary wealth these changes will bring.

The Power of Exponential Growth

But when it reaches a certain tipping point—the steep “ramp” you see in the chart—it takes off like a rocket. As an investor, you want to be in position before the ramp up. 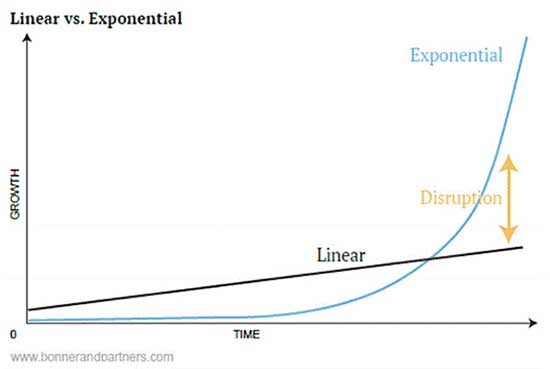 Think about a company like Apple. It enjoyed explosive growth—and explosive gains in its share price—during the early years of the computer revolution. After that, the company held steady for quite a while.

But then, with the introduction of the iPhone in 2007, Apple’s stock began its meteoric rise. And in August 2018, Apple became the first publicly traded company valued at $1 trillion. 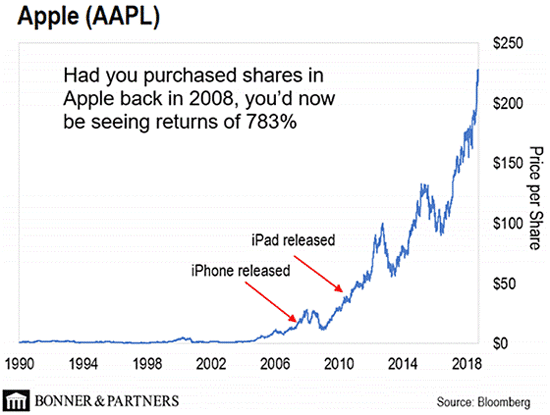 We’ve seen other examples of exponential growth in the technology sector, too…

Over the last few decades, it took, on average, about 20 years for the typical Fortune 500 company to reach a valuation of $1 billion.

But it took Facebook only five years—from its founding date in 2004—to reach a $1 billion valuation.

By 2009, Uber took less than three years to reach that marker.

In 2012, virtual-reality firm Oculus did it in just over a year.

And as recently as 2014, a workplace productivity company called Slack pulled it off in only eight months. 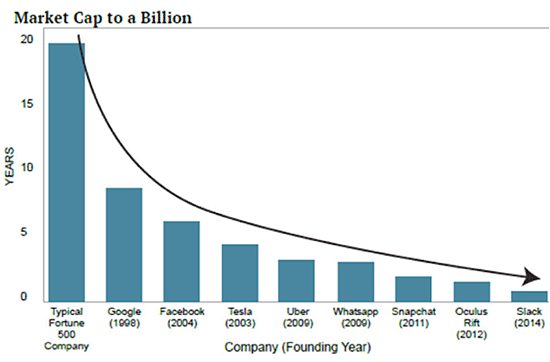 As you can see, this trend is speeding up. And investors are reaping the benefits.

In 1965, before he co-founded Intel and became a billionaire, Gordon Moore was working as director of research and development for a company called Fairchild Semiconductor.

He was asked by Electronics magazine, a popular trade journal at the time, to predict what would happen in the semiconductor components industry.

[Semiconductors are the electronic components made up of integrated circuits that are essentially the “brains” of any kind of electronic machinery or consumer electronics product.]

Moore noted that the number of components in an integrated circuit doubled approximately every year. He predicted that this trend would continue for at least the next 10 years.

Later, Moore revised his prediction to say that a doubling would occur every two years.

This prediction, known today as “Moore’s Law,” has been astoundingly accurate. Microprocessors have become smaller, cheaper, and more powerful since 1965.

And as Moore predicted, the number of components in a semiconductor has doubled approximately every two years.

Thanks to Moore’s Law, we have an abundance of affordable, powerful electronics today. It’s the reason why the smartphone in your pocket has more computing power than all the computers originally used by NASA to send astronauts to the moon.

And while Gordon Moore originally made this observation with regards to computer chips, it also holds true for many other innovations in the tech space.

For instance, the number of bits per second that can be sent through an optical fiber cable has increased roughly 10 million-fold since 1980. That rate of growth actually far outpaces Moore’s Law.

And consider another example. The cost to sequence a human genome—providing a “blueprint” of a human’s genetic code—has fallen dramatically in recent years.

As you can see in the chart below, the cost of sequencing a human genome kept pace with Moore’s Law for the first eight years of the 21st century. But then, the cost plunged exponentially. 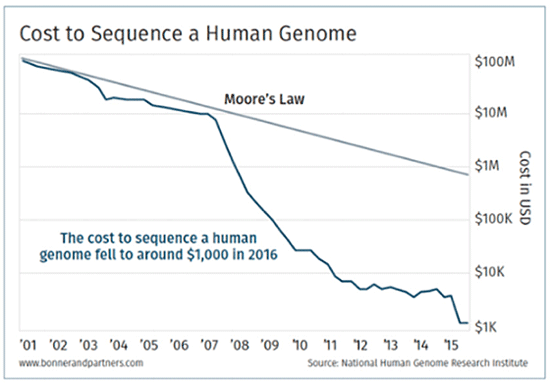 This sort of accelerated innovation will continue in the years ahead.

And investors now have ample opportunity to invest. Here’s why…

Return of the Tech IPO

I recently reported that the number of exciting technology companies coming to market has picked up in 2018.

Thanks to readily available private capital, many technology companies have remained private, denying ordinary investors a chance to stake a claim. This has led to a backlog of exciting tech initial public offerings (IPOs). 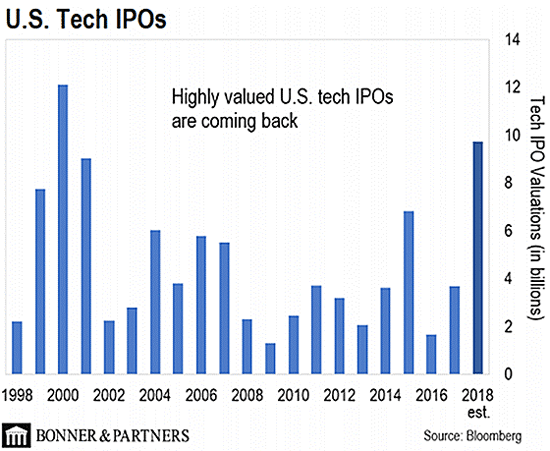 But the good news is that, after years of low IPO numbers, we’re finally seeing the pace of tech IPOs pick up.

Prepare for the Future

Just 20 years ago, our world was a very different place.

Laptops and the modern internet were both a few years old, but neither had reached mainstream acceptance.

There were no digital music players… no smartphones… no tablets… We didn’t have Facebook or texting.

And if we got lost, there was no Google Maps to save us.

Over the next 10 years, we’ll see plenty more of these types of exponential advances. Barriers will be broken… whole new industries will be created… and fortunes will be made.

Computing power will surpass human brain power, and artificial intelligence will be everywhere.

Millions of autonomous, self-driving vehicles will shuttle passengers back and forth on U.S. highways. This will save lives, free up time, and reduce gasoline consumption, traffic, and car insurance premiums.

DNA sequencing, which now costs less than $1,000, will soon cost less than $100, opening the door for new preventive and personalized medicine (and insurance coverage).

The average lifespan for anyone born in the last 20 years will exceed 100 years.

Smart investors will make a fortune. There has never been a better time to invest in cutting-edge technologies.

P.S. Of the dozens of tech trends I’m following, I believe this has the most explosive growth potential. It’s expected to unleash $12.3 trillion in wealth and make early investors a fortune. If you want to be one of them, I recommend you act before November 14. That’s when a little-known catalyst will kick the development of this technology into high gear.

I recently released a special video presentation with all the details. Go right here to see it for yourself. (Keep in mind, this video is only available until midnight, so if you’re interested, don’t delay.)

Sorry we have to get rid of plastic straws in California, but idiot pigs throw their plastic trash in our oceans and they end up stabbing turtles and sea creatures through their eyeballs. We don’t need more plastic in our ocean. At least paper will break down. If people acted responsibly on some levels, we wouldn’t have to take away their plastic crap.

I know this article had some great points but the part about a nanny state because of plastic straws really bugged me. Perhaps it’s a small part of a large article, but I needed to comment.

Doug, when I hear someone saying, “We don’t need a government,” it gives me such a positive feeling that there is still some sanity on the planet.

And when you combine that with the way they just add rules and restrictions (or what they prefer to call “laws and regulations”), it makes more and more sense.

One argument I use to those who say we need more laws and regulations is: Do you need some law enforcer telling you how to say, “Hello,” with the penalty for saying it incorrectly being a severe beating?

And that’s what I fear the United States is moving toward.

I received a small inheritance a bit over a year ago. I invested half of it into the breaking cannabis market to begin a side fund for extras like vacations and grandkids’ educational funds… things I have wanted to do for a long time. While I haven’t taken many profits at this time, my portfolio is up over 200%. I have expanded my holdings through moving funds to new recommendations. Once I am able to expand value from five to six figures, more cashing out will occur. Small stuff for most, but great for me.

Regular readers know the legal cannabis market is opening up a massive money-making opportunity today. If you’d like to take advantage, signing up for pot stock expert Nick Giambruno’s Crisis Investing newsletter is the best place to start. He has a portfolio full of the top names in the industry set to soar in the years ahead. If you’re interested, make sure to check out his new video on the up-and-coming industry.