Nomi is an expert at understanding central bank policy… and with the Federal Reserve’s latest rate hike last week, her expertise is more valuable than ever.

In the following essay, she explains how the Fed’s actions are impacting one key sector of the markets: commodities… then shares a way to play its long-term bullish trend.

It’s the first time in modern Fed history that America’s central bank has raised interest rates by 75 basis points twice in a row.

Remember, it had already raised rates by a total of 1.5% over three consecutive interest rate hikes (in March, May, and June).

For readers who don’t know me, I’ve made it my mission to research and understand what central bank policy means for financial markets, economies, and our own portfolios.

In fact, as the Fed meeting was playing out on Wednesday, I was on Fox Business to discuss the situation with viewers: 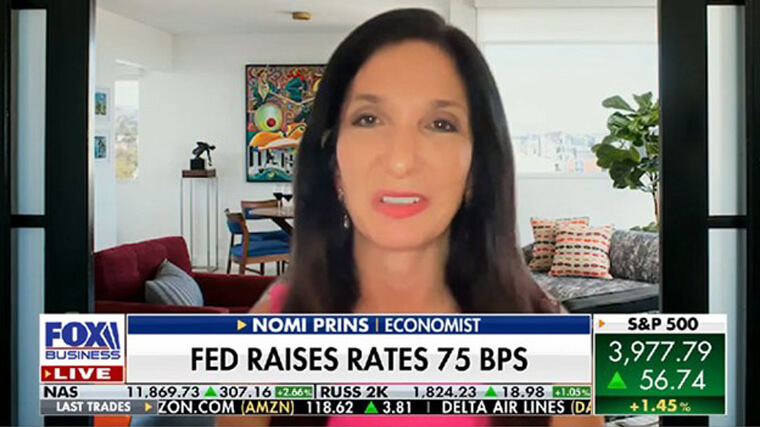 Due to all the fear and uncertainty around the Fed’s interest rate policy, the markets have been erratic…

So today, I’m going to talk about one sector of the market that is both directly and indirectly affected by the Fed’s interest rate policies… and how you can use the current pullback in this sector to your advantage.

Could you please comment on the decline of commodities as a category, given their decline relative to other sectors?

Every Friday, I respond to readers’ questions on the essays I write.

But sometimes, a reader’s question prompts me to delve further and write a full essay in response. That’s what happened when I read Dorothy’s message. So thanks for taking the time to write to me with that great question, Dorothy.

Now, earlier this year, most commodities increased on news of the war in Ukraine.

But in recent weeks, the commodity markets have taken a pounding …

Just have a look at this chart of the Invesco DB Commodity Index Tracking Fund (DBC). It tracks 14 of the most heavily traded and important physical commodities in the world. This includes gold, silver, oil, natural gas, aluminum, copper, zinc, wheat, corn, sugar, and soybeans.

As you can see from the chart, commodities rose nearly 50% in the first half of the year. But we’ve seen a 17% pullback since their June peak: 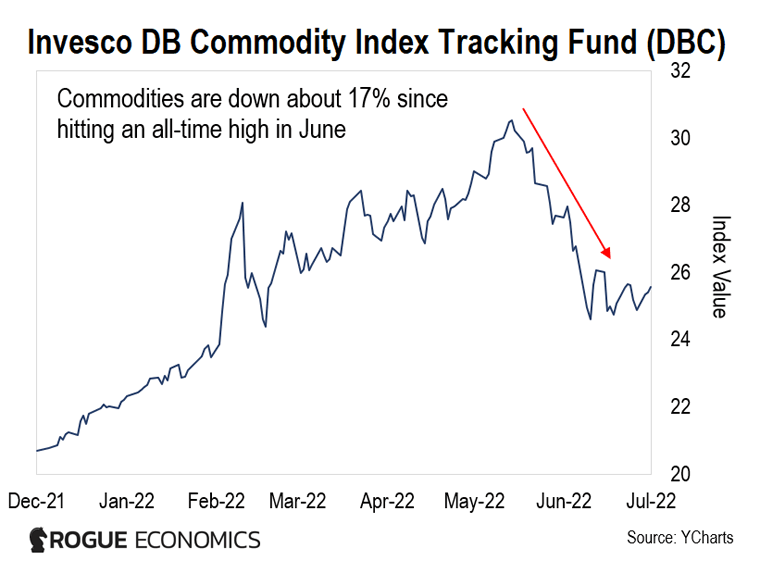 So today, I’ll show you what is behind the recent decline in the commodity markets… and what it means for your portfolio…

The first thing weighing on the commodity market is the U.S. dollar…

A strong U.S. dollar is typically bearish for commodities.

This may sound counterintuitive… After all, most commodities are priced in dollars.

But the U.S. dollar is the strongest it’s been in two decades.

It’s now hovering almost on par with the euro: 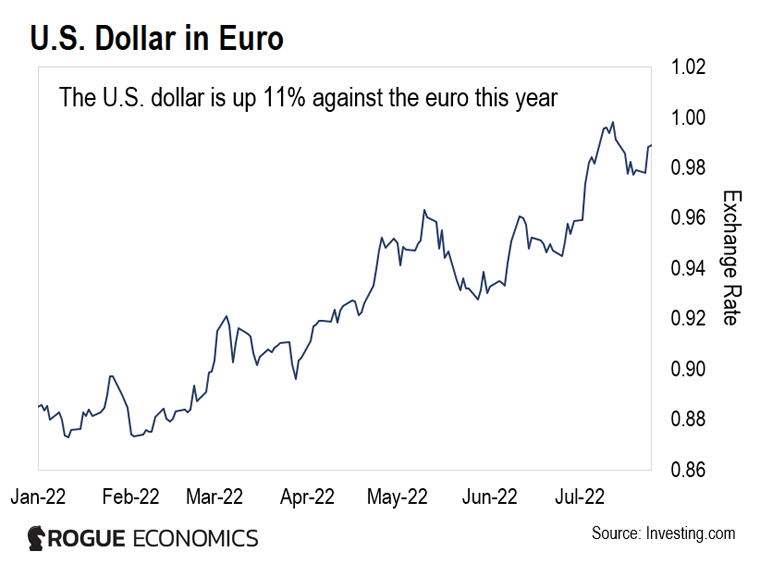 It’s also up at least 10% against many other global currencies since the start of the year, including the Japanese yen and the pound sterling.

This has a twofold effect.

It also increases the cost of debt-servicing for countries with dollar-denominated debt. That puts massive pressure on the economies of emerging nations, thrusting many into a recession.

One of the biggest drivers of the dollar’s strength right now is the Fed’s hawkish interest rate policy.

The reason for this is simple…

When interest rates rise, individuals see a higher return on their savings. This tends to attract foreign investment, increasing the demand for (and value of) the home country’s currency.

So if the Fed continues to raise interest rates, which I think we can expect for the next couple of months anyway, the U.S. dollar should continue to strengthen.

And this will put downward pressure on commodity demand and prices.

The reason rising interest rates tend to be bearish for commodity prices is because they indirectly increase commodity inventories.

In a high-interest-rate environment, the cost of financing stockpiles is higher than when interest rates are low. So, consumers of raw materials switch to buying commodities on an as-needed basis.

This creates an inventory overhang on the part of commodity producers. And this pushes their prices down.

The Fed Will Respond to the Market

Now, the Fed understands that if it continues on a path of aggressive rate hikes, there is a serious risk that it will thrust the U.S. economy into a severe recession.

The Fed initially ignored rising inflation… saying it would pass once the effects of the COVID shutdowns were fully out of the system.

It wasn’t banking on a war, an energy crisis, and ongoing lockdowns in China. Or inflation hitting 9.1%, the highest since the end of 1981.

So when it finally took action against inflation in March, it was too late. No matter how tough it has fought since then, it hasn’t made a dent in rising prices.

All it has done is cause fear and uncertainty – and a lot of volatility – in the markets.

That’s because in the distorted times we live in, the markets depend on cheap money. The almost $8 trillion the Fed has pumped into the economy since the 2008 financial crisis has flooded the markets and Wall Street. The S&P 500 is up nearly 350% since then.

But with that cheap money flow now more and more in doubt, investors have backed off.

I’ve been saying for months that the Fed will have to dial back its hawkish stance soon.

Remember, the markets are the Fed’s ultimate master. The S&P 500 already dropped as much as 23% this year.

It has recovered slightly in recent days – a sign that the market may have already priced in the 0.75% interest rate hike.

But if the Fed takes an even tougher stance, the market could plummet again.

And although I think it’s unlikely, if Fed Chair Jerome Powell gives a roadmap of further big hikes over the coming months, that could spook the market even further.

The markets will make their feelings known… and the Fed will react as it always does, by bowing to pressure from the market and easing off on rate hikes.

When the Fed eases back on its hawkish rhetoric, as I believe it will later this year, commodities will rebound.

And there are other reasons to be optimistic about commodities…

One of these is global population growth.

There are currently nearly eight billion people living on Planet Earth. By 2050, that is set to increase to almost 10 billion.

That growth will create greater demand for homes, consumer goods, transport, and electricity. And that will increase demand for the raw materials needed to make them.

But sheer population growth isn’t the only reason we’ll need more resources. The spread of prosperity across the world, especially in China and India, is another key factor.

According to the United Nations, two out of every three people will be living in cities or other urban centers by 2050. That’s at least 2.5 billion more than now.

Along with that, the richer diets associated with city dwelling mean we will need to double the amount of crops we grow by 2050.

Rising energy, fertilizer, and transportation costs as well as global supply chain disruptions have all pushed the cost of the food we buy higher.

And in the short term, I don’t see any of these factors reversing.

But if you’re investing in commodities, you need to look to the long-term horizon…

And when you look at all the pieces of the puzzle, the recent retreat in commodities seems but a blip in an otherwise long-term bullish trend.

And to me, it looks like a buying opportunity.

I’ve already shown readers ways to play the long-term potential of commodities such as copper, lithium, and nickel.

But for the reasons outlined above, I’m particularly bullish on agriculture and food right now.

Like most commodity-related plays, VEGI has taken a hit in recent market volatility. At writing, the fund is down nearly 20% from its April high.

The retreat makes for an excellent buying opportunity. Buying on a pullback is a great way to counter market volatility, such as we’re seeing right now.