Justin’s note: As regular Dispatch readers know, part of my job at Casey Research is to pass along valuable ideas that come across my desk. When I read today’s essay from Palm Beach Letter analyst Greg Wilson, I knew I had to send it your way.

According to polls, most Americans think the nation is more divided than it’s been since the Civil War. And these divides are getting worse…

Below, Greg shows why a little-known program in California’s Bay Area could spark a financial civil war… and he reveals why the U.S. dollar could be the first casualty.

You may have heard the saying, “As goes California, so goes the nation.”

Californians have historically been on the cutting edge of social and political change.

Whether it was protesting the Vietnam War, advocating for free speech, or civil rights, California has always been among the first states to get involved.

And it’s on the front lines once again.

Its opponent: the federal government.

The latest battle is over fuel-efficiency rules for cars.

The Trump administration wants to strip California of its right to set its own air-quality rules. California isn’t backing down, though.

It says the proposal “is contrary to the facts and the law.” And it’s looking to change its rules to make any federal changes null and void.

California Attorney General Xavier Becerra said, “We’re going to do everything we must do to continue to move forward rather than backslide.”

In fact, California has already threatened to sue the federal government.

There’s a lot at stake.

An impasse would create different emissions standards between California and the rest of the country. That would create chaos for the car market.

As I’ll show you today, this divide runs much deeper than California and emissions standards. It’s part of a bigger theme that will threaten the U.S. dollar—and your wallet.

More on that in a moment…

As part of the Clean Air Act, California can set its own emissions standards… and 12 other states are following its more stringent standards as well.

In total, these states have more than 130 million residents and cover over one-third of the domestic auto market.

But it gets even more complicated. In May 2018, California and 16 other states—including New York and Illinois (and the District of Columbia)—formed a coalition to sue the Environmental Protection Agency (EPA).

The goal is to block President Trump’s attempts to weaken emissions standards.

It’ll be a heated showdown. And it could go all the way to the Supreme Court. Whatever the outcome, it will create more division between the states and the federal government.

The fight over fuel emissions standards is a small example of a bigger threat facing America today: States want more autonomy from the federal government.

There are a number of hot-button topics on which states and the federal government don’t see eye to eye. Immigration, climate change, marijuana legalization, and health insurance are just a few.

It’s no wonder that a July 2018 Gallup poll found that a record-high 77% of Americans believe the nation is divided.

Even more shocking… a June 2018 Rasmussen poll showed 31% of Americans think a civil war will break out in the United States within the next five years.

We agree that the states and federal government seem headed for a breakup. This split won’t come through bullets, though…

Behind the scenes, 13 states are pushing through laws designed to undermine the federal government’s monopoly on issuing money.

Their collective economic output is $7 trillion.

Led by California, New York, and Illinois, these states are changing their state laws to dismantle the need for Federal Reserve-issued U.S. dollars.

State-issued money isn’t new. Before President Lincoln banned the practice in 1863, states had issued more than 8,000 different types of money.

Here’s what Teeka wrote about New State Money in August 2018:

The states are using a loophole to escape the government’s currency issuance laws. They will issue a digital form of money backed by municipal bonds, which themselves are backed by taxes or project revenues. This loophole was created so states could issue bonds to raise money for state projects, like highways and schools.

What the states are doing now is enlarging this loophole so they can start issuing their own digital money backed by these projects. State residents will also be able to pay their state taxes in these new digital currencies.

One example of a municipality using state-issued money is Berkeley, California.

Berkeley has always been on the leading edge of social issues.

But it’s drawn the ire of President Trump. Last year, he threatened to cut off federal funds to the University of California, Berkeley after the university canceled a speech by a prominent conservative activist.

In response, Berkeley is running a pilot program to sell municipal bonds on the blockchain. It’s a whole new way to fund programs and projects while bypassing the federal government.

Using new cryptocurrency technology, states can issue money that you can’t counterfeit or inflate, and is mathematically matched to incoming revenue.

That will make state-issued money a more secure and more stable store of liquid value than the U.S. dollar.

Over time, the need for dollars will diminish as states start dealing with each other in their own—stronger—money.

And that’s a threat to the dollar’s supremacy.

The decline of the dollar is coming. The time to prepare is now.

At The Palm Beach Letter, we’re using a three-step strategy to keep your money safe from the coming upheaval.

If you follow the three steps above, you’ll be able to survive and prosper during the turmoil ahead.

P.S. As I mentioned above, 13 states are close to separating from the union, using state-issued money.

You can find out all about them in Teeka Tiwari’s new book, America’s Second Confederacy: How to Survive and Prosper. Click here to learn how to get your copy…

Today, a reader responds to our recent essays on the new space race. If you haven’t read them, you can catch up here and here.

Regardless if the new Space Force is part of the Air Force, as some argue, or is an independent military branch, it is not the issue. The issue is that we need to aggressively pursue a defense of our space vehicles.

Have You Claimed Your FREE Blockchain Special Report Yet?

As a valued Casey reader, we want to send you our new report—“Welcome to the Blockchain Era”—absolutely free.

In this comprehensive report, you will discover:

Learn how to get instant access right here. And by claiming your report today, you’ll automatically be signed up for Disruptive Profits editor Marco Wutzer’s urgent blockchain presentation next week… where he’ll discuss the coin that could kill Ethereum. 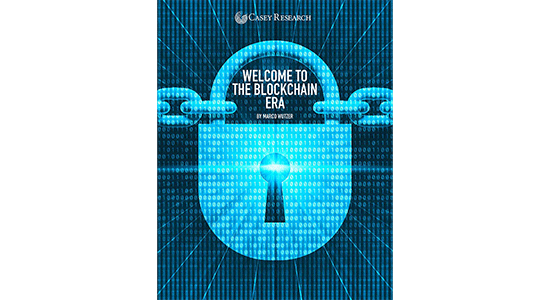