It’s one of the key factors in investing. It’s also what helps guide us when we make recommendations.

Every December, we make predictions for different key markets and economic indicators for the coming year. We also like to review our previous year’s predictions to see what we got right and what we got wrong.

Keep in mind, we don’t care about the exact price of these markets. Trying to determine an exact price is useless. Anyone that tells you otherwise is just seeking attention.

The point isn’t to get the price right. It’s getting the direction of the move right.

The Dollar Ended the Year Up

Last year, we said the dollar would head lower. While that was initially the case, the dollar ticked higher to end the year.

Predicting the value of the dollar is complicated. You must have something to compare it to. That just happens to be a basket of currencies like the euro, the Japanese yen, and others. We measure this through the U.S. Dollar Index (DXY).

Overall, DXY is in decline. The chart below shows the dollar’s value against other currencies going back to 1980. 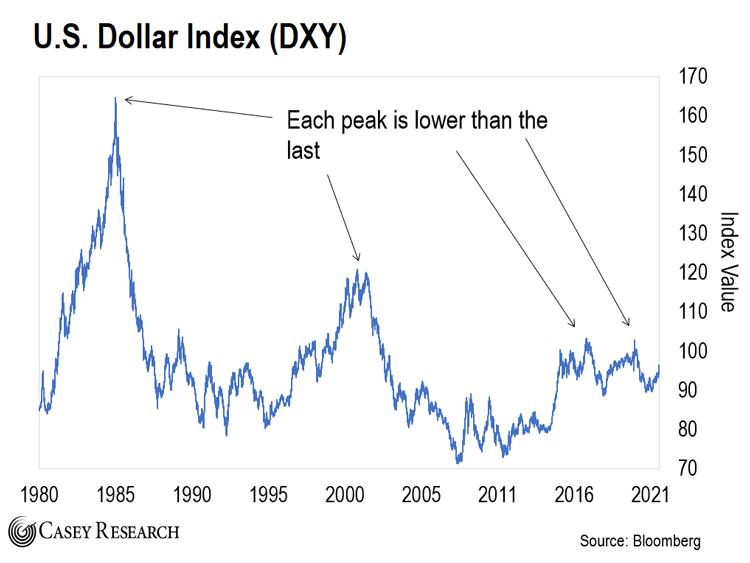 In most cases, you wouldn’t invest in this security if we showed you this chart without identifying what it was. The problem is, we can’t exactly avoid it since everything we do involves dollars in some way.

That’s why over the past two years, we’ve said there’s a grand plan in the works. The plan is to whittle away the value of the U.S. dollar in a way you’ll barely notice.

The dollar is both a benefit and a curse. We price everything in dollars because it’s the world’s reserve currency.

However, as we said above, politicians left, right, and center continue to flood the system with massive dollar-spending programs.

It’s simple economics. When you flood the market with a product, the value of that product drops. It’s the same with money. The more money in the system, the less it’s worth.

But that also means those dollars must go somewhere. That’s why you see new highs in assets like the stock market and real estate nearly every month.

It’s all a smokescreen. You feel wealthier, but you’re slowly losing purchasing power along the way.

That’s how savings erode. It’s an exercise in why everyday people feel left behind. And it’s one way you get a widening wealth gap. 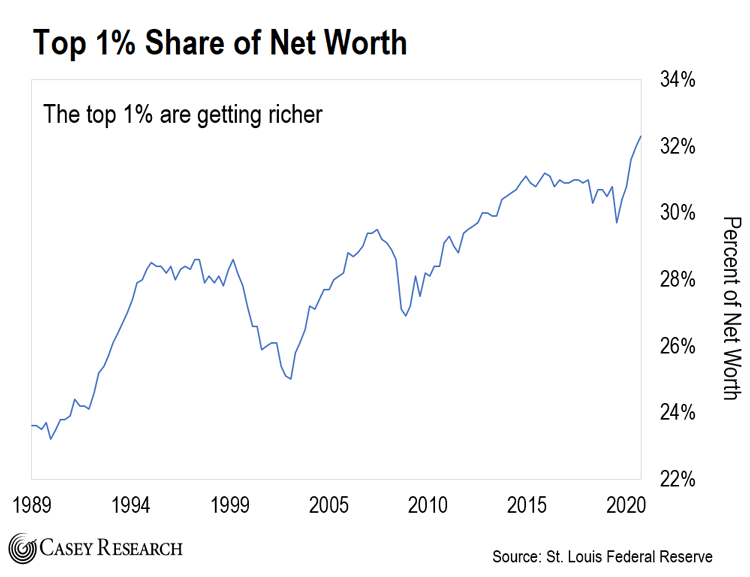 Over the coming years, we expect the dollars needed to produce a sufficient income will keep growing. We’re already seeing that happen.

As we detailed last year, one way to show you what we mean is by looking at the amount of money it would take to earn the same amount of interest as it did 25 years ago.

In 1995, the U.S. 10-year Treasury yielded 7.85%. The average household income at that time was roughly $33,000. That meant $1 million worth of 10-year treasury bonds produced more than double the median nationwide household income.

Last year, the median household income was around $67,500. So incomes are higher.

However, the rate on a 10-year treasury bond at the time of our last prediction issue was 0.85%. To have about double the median household income – like you had in 1995 – you would need to have a portfolio worth nearly $16 million.

It’s an example of how a falling dollar erodes your savings over time. You just can’t get the same type of return without taking on much more risk.

By the time the average investor notices, it’s too late.

However, even though we continue to expect the value of the dollar to perpetually decline, we must measure it against what other countries and central banks are doing.

To us, that means sizing up the actions of the Federal Reserve System. And right now, it looks like the Fed is playing defense. They’re making sure the dollar stays the world’s reserve currency, at least for a little while longer.

Last week, we got confirmation that we’ll see this playbook continue. That’s because President Biden re-nominated current Federal Chairman Jerome Powell to stay at his post.

At the end of the day, we think the dollar is heading lower over the long term. But there may be surges along the way. We think 2022 is going to be one of those surges. 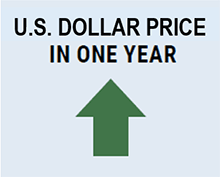