Have bitcoin and crypto just achieved their breakthrough moment?

Despite this week’s headline-grabbing news…

A hacker made off with $600 million worth of crypto.

He hacked into a network… stole the loot… and then ran off.

But not for long…

The hacker had a change of heart. He’s begun repaying the stolen loot.

And from what we can tell, there wasn’t a single FBI agent, securities regulator, or government official in sight to lead the recovery.

Crypto’s unregulated free market appears to be dealing with it by itself. What to make of it all?

We’ll try to figure that out today…

The rise of bitcoin and cryptocurrencies is one of those ideas we’ve covered extensively. That’s what made this week’s story on the “crypto heist” all the more interesting.

This Could Have Crushed Crypto – It Didn’t

On Tuesday, we read the following in the Financial Times:

A decentralised financial network has claimed hackers absconded with about $600m worth of cryptocurrencies in one of the largest heists to target the growing digital asset industry.

Poly Network, which links some of the world’s most widely used digital ledgers, said on Tuesday that attackers had exploited a vulnerability in its system and taken thousands of crypto tokens. The attack would be one of the largest to date on a crypto venture, on a par with breaches of exchanges Coincheck and Mt Gox.

The alleged hack was a blow to supporters of decentralised finance, or DeFi, which has been one of the fastest expanding areas of the booming cryptocurrency market. It also highlighted the lack of consumer and investor protections in a market with only light oversight from financial regulators.

Just taking the last paragraph, at first glance, we assumed the FT would be right. That it would be a blow to decentralized finance (DeFi)… and that the heist would bolster the case for more oversight from regulators.

[Decentralized finance (DeFi) is a financial system outside the control of banks, central banks, and government.]

But as the week has gone on, both arguments appear to be wrong.

In fact, if you look at the seven-day total market capitalization of all cryptos, it’s hard to see that it had any impact on the market at all: 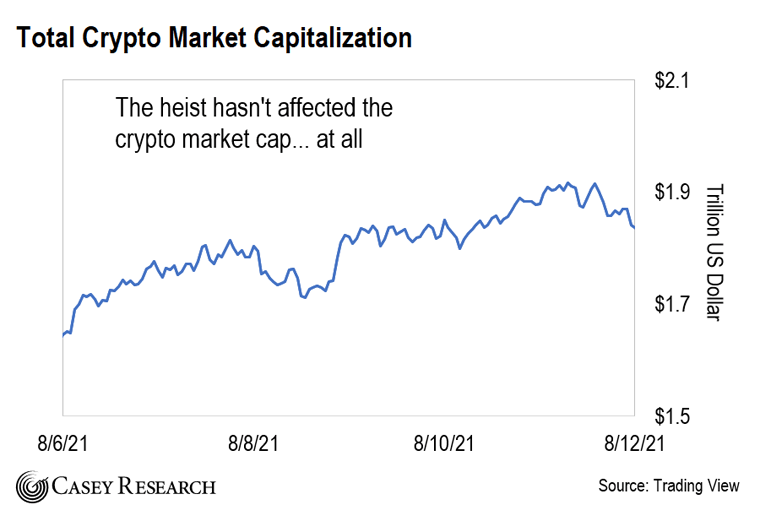 In an unusual twist for the one of the largest cryptocurrency heists ever, a hacker who stole more than $600 million in tokens from blockchain-based platform Poly Network started sending back the stolen funds Wednesday after a slew of cryptocurrency experts and businesses pledged to track the hacker’s crypto wallet on the blockchain and help retrieve the assets.

At the time of the report, the hacker had repaid $258 million worth of the stolen crypto.

This Is How the Free Market Deals With a Crisis

But nothing quite on this scale. So why the about-turn?

Well, $600 million is a lot of money. So it’s not easy to move it quietly from one place to another.

The second issue the hacker faced is that on the blockchain, every transaction is trackable. Each transaction leaves a “breadcrumb” that anyone can follow. So it’s difficult to move it out of sight.

The alternative is to move it into the regular financial system. But that wouldn’t be easy to stay under the radar either… not when there’s $600 million to move.

So whatever the genuine reason for the about-turn, the hacker has started returning the stolen crypto.

And so as unlikely as it may seem at first, rather than weakening crypto and decentralized finance, this crypto heist may have strengthened the crypto market.

Remember: from what we can tell, none of the recovery of the crypto was because of the involvement of government agencies.

What’s more, as a colleague pointed out to us, there was no bailout, no perceived threat to the financial system, and nothing that involved putting the taxpayer on the hook for millions, billions, or trillions of dollars.

It’s not a stretch to say that this could be the moment that crypto and DeFi proved itself to be a viable alternative to the traditional banking system.

P.S. The free market’s nature is one of the things that first attracted investment expert Nick Giambruno to bitcoin. Now, Nick admits that he’s no fan of the other cryptos out there.

Nick has written extensively on the subject. And he’s helped investors profit handsomely from this market, including in one case a 2,123% gain in around 70 days.

The good news is, Nick has identified several other opportunities which he believes could result in similar sized gains. Details here.

A Bullish Sign for Traders in This Popular Crypto

A recent update to Ethereum, the second-largest cryptocurrency based on market capitalization, has lifted the entire crypto sector.

Known as the “London Hard Fork,” this development is significant for the Ether network. Essentially, the benefit of this update is that it allows the network to handle many more transactions per second while simultaneously lowering transaction fees.

The big question, of course, is what does this mean for the price of Ethereum?

One of the biggest obstacles surrounding mainstream commercial adoption of cryptocurrencies is how difficult it can be to facilitate transactions.

The London Hard Fork is what many Ethereum investors have been waiting for to help overcome this challenge.

It is a seriously impressive bit of computer engineering and is a great fundamental boost for the entire Ethereum network.

Of course, here at Chart Watch, we are interested in whether the price action supports any kind of fundamental basis.

I have found that the best investment opportunities are almost always when the fundamentals and the technicals both argue for price appreciation.

So let’s look at a price chart of Ethereum, where I’ve marked an important chart pattern and its respective key level. 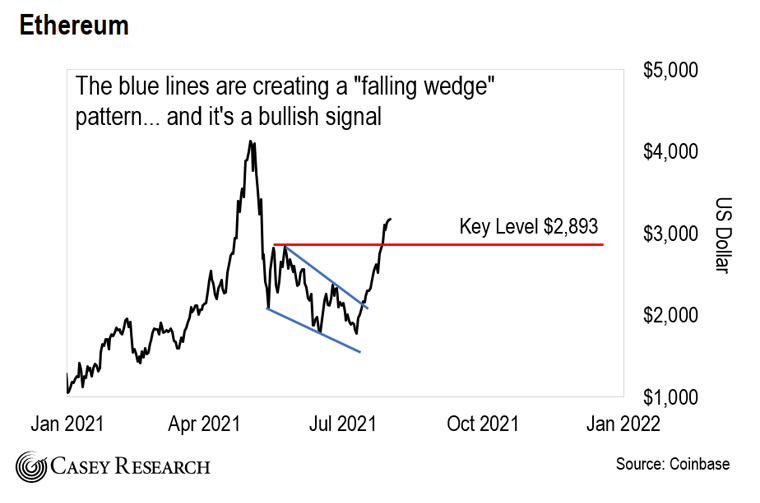 The chart pattern drawn with the blue trendlines is known as a “falling wedge.” Wedges are reversal patterns that break out in the opposite direction of their sloping trendlines.

This means a falling wedge, like the one that has taken shape in Ethereum, is a bullish signal. Of course, signals can fail. Therefore, it’s crucially important to have price action confirm whether the signal is valid or not.

Breaking above the $2,893 key level is the confirmation I was looking for… and in my estimation, it places Ethereum on bullish footing.

This is an indication that the price is heading towards a new all-time high.

Providing the price stays above the key level, any price weakness will be an opportunity to buy before it hits that all-time high. As always, we’ll continue to watch this chart to see how it plays out.