We told you that over the next few weeks, we’ll show you how he has forecast every market move using the cycle the market has followed religiously for over 200 years.

That’s because every 18.6 years, property, economy, and stock markets move through a repeating series of peaks and troughs – like clockwork.

Using this knowledge… Phil didn’t just predict the 2008 crash – he knew with certainty that it would happen.

He also said property would boom following 2020, when American economists were calling for the worst recession since the Great Depression.

Today, he’ll tell you more about how we’re not looking at a housing crash yet… despite mainstream headlines sounding the alarm…

In 2022, headlines said that if interest rates went up, the housing market would collapse…

But fast forward to today, we know that’s just not the case. 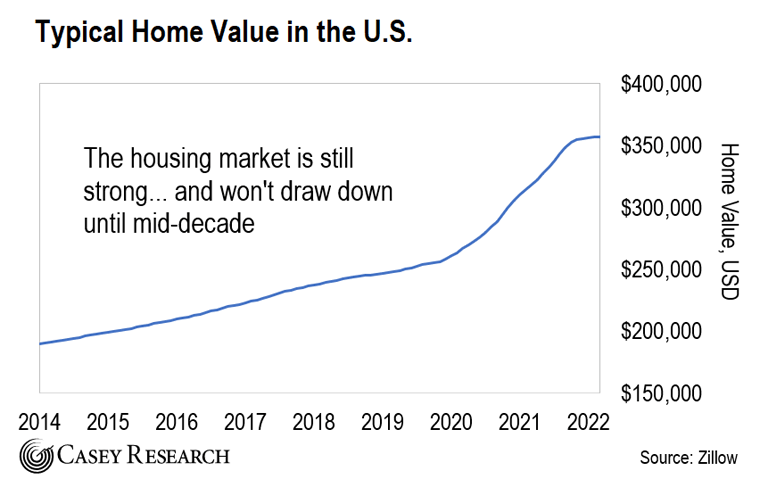 Because right now, interest rates are at decades-high levels with the Fed Funds rate at 4.25-4.50%… and U.S. homebuilders are doing fantastic.

Luxury homebuilder Toll Brothers Inc., in its earnings report and call with analysts last week, perfectly encapsulated the current moment in the housing market. Its new orders have plunged, but earnings per share came in at a record high, and guidance for both earnings and profit margins remain strong – at least for the next few quarters.

In other words, while Toll waits for new business to come, it’s raking in cash at record levels… all while maintaining strong guidance.

The company isn’t predicting a doom-and-gloom scenario anytime soon. And it would know if things were looking bad. It’s the leading luxury homebuilder in the U.S. and a Fortune 500 company.

Plus, the cost of raw materials such as lumber is going down. So the longer builders like Toll wait for their new orders, the lower their costs of future construction will be.

No surprise then that the company’s profit and margin guidance is strong.

Better yet, interest rates are stabilizing. The Fed isn’t likely to hike in massive 75 basis-points steps.

The reason is slowing inflation. In December, consumer prices fell month-on-month for the first time in 2.5 years.

And it will decrease further as the Fed slows down its hiking.

In other words, 2023 is going to be a bumper year for homebuilders.

More on this topic…