Rachel’s note: As we approach the new year, now’s the perfect time to take stock of your portfolio… and plan your strategy for 2021.

That’s why this week, we’re sharing a market prediction series from our experts at Casey Research.

Below, Strategic Investor editor Dave Forest breaks down gold’s moves this year… what he sees ahead… and another precious metal that could catch fire in 2021…

This time last year, gold bulls were celebrating. Bullion had just broken $1,500 per ounce for the first time since 2013.

At Strategic Investor, we called that breakout. We believed relentless money creation from the Federal Reserve had to drive monetary metals higher.

At the time, the Fed balance sheet was indeed creeping higher. On December 4, 2019, we told our Strategic Investor subscribers that the Fed’s total assets had risen by about $250 billion in just over 90 days. (Current subscribers can review that here.) Here’s what the chart looked like back then: 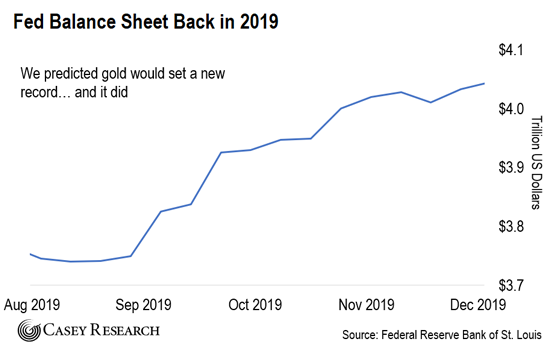 Based on this rise in Fed spending, we called for gold to set a new high in 2020. We predicted it topping its previous record above $1,900 per ounce.

Then, this happened to the Fed balance sheet: 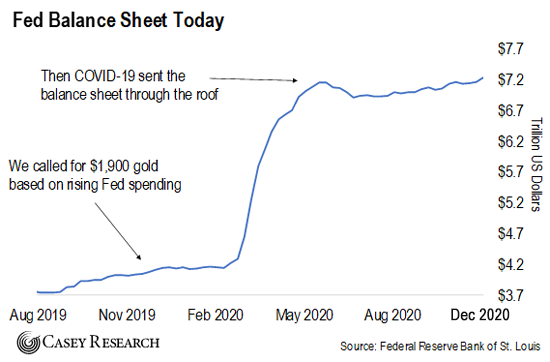 When COVID-19 hit in March, the stock market collapsed. The Fed immediately turned on the printing press. Between March 11 and April 22, they pumped out $2.3 trillion in new funds. That’s $55 billion in money creation daily.

This is the greatest fit of money printing in world history. It’s nearly double the $1.2 trillion the Fed created to stave off the 2008 financial crisis.

Remember, we believed gold would set new records based on a Fed balance sheet of $4 trillion last year. With Fed assets exploding to over $7 trillion, a massive gold run was inevitable.

From a low of $1,475 in March, gold immediately rebounded to $1,750. It only needed a couple of months to consolidate – then it exploded higher again. 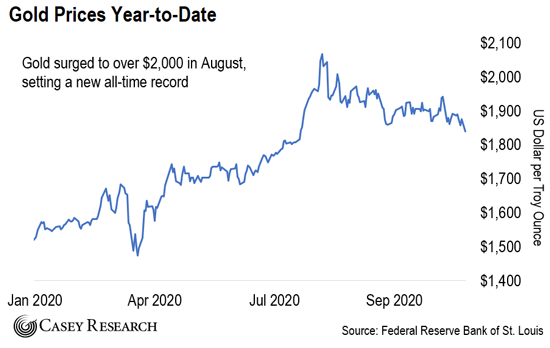 It’s since dipped back slightly. But the price is holding firm right around the $1,900 mark that we targeted last year.

The call for the coming year is obvious: gold goes higher. 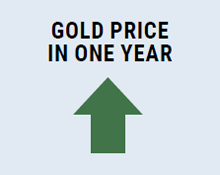 Maybe a lot higher. If we liked it last year, we like it even more with 3 trillion new dollars suddenly shoveled into the monetary system.

How much higher could gold go this year? It’s worth remembering that bullion notched current levels – $1,900 – back in 2011 when the Fed balance sheet was $2.8 trillion, 60% lower than today.

We’ve minted over $4 trillion since then. So a doubling of the gold price wouldn’t be at all surprising, on a fundamental basis.

That said, gold is a tiny market. In the short-term, it’s easily buffeted by traders.

The other near-term risk I see is the reopening of the global economy. As COVID vaccines emerge, we could see perceived risk drop as business restarts. That would likely cause a rotation away from safe-haven assets like gold.

I think, however, we’ll see gold pick up in the second half of the year. The euphoria of global reopening will wear off. Then investors will realize that COVID’s done lasting damage to the global economy.

Governments will keep interest rates low. They might even try to push them lower to help people muddle through. I don’t see the U.S. going to negative interest rates – but some other high-profile central banks might.

When investors realize bond returns are staying at low to nothing, gold will pick up. It only takes a small percentage of global wealth shifted into bullion to move the price a lot.

I don’t think gold will roar higher like we saw this past summer. But I expect it to steadily push upward. I think we’ll see $2,400 by the end of 2021.

That will be a sound new record. It will also be great for gold stocks, especially if things like crude oil stay cheap, reducing mining costs and fattening profit margins. I expect gold stocks will handily outperform the solid gains in physical gold.

But It’s Not Just Gold…

It’s important to remember gold isn’t the only monetary metal. Another chart we looked at last year is the gold-to-silver ratio. Here’s what it looks like today: 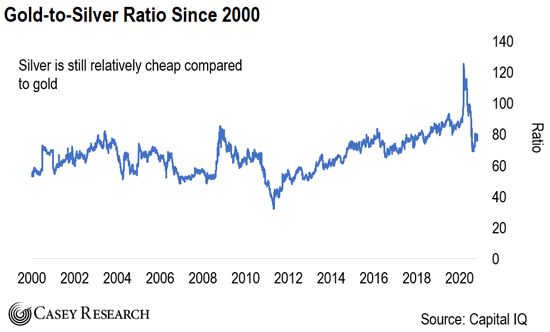 When gold’s run began this year, silver initially lagged. You can see the ratio spiked to over 120 – indicating that one ounce of gold was 120 times more expensive than one ounce of silver.

Silver caught fire in July though. It solidly outperformed gold, leading to the steep drop in the ratio at the right of the chart.

I think that’s going to happen this year as precious metals continue their bull run. I wouldn’t be surprised to see a ratio around 60 this time next year. That would mean silver posts better gains than gold in 2021.

There’s one more precious metal to watch the coming year: platinum. Physical platinum prices completely sat out the run in 2020. Platinum’s been stuck around $800 per ounce.

That’s a very unusual situation. In the past, platinum usually traded at a premium to gold. Today it’s at a steep discount.

Late this year, some significant platinum operations in South Africa shut down. That country produces 70% of world platinum supply, so production losses here are big news.

This is a quiet space few investors are watching. But rampant money creation should drive this metal higher along with the others. Sooner or later, it’s going to catch fire. In fact, I think we could see a doubling of platinum prices by the end of 2021.